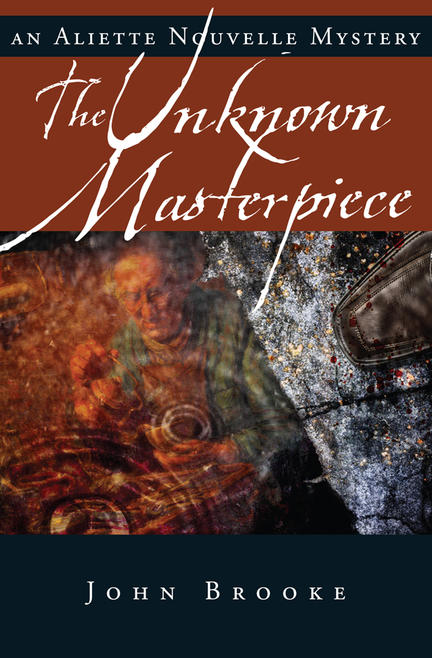 Inspector Aliette Nouvelle's romantic life is in tatters. This sad fact becomes a heavy distraction as she goes back and forth from France to Switzerland, trying to determine who killed a Basel art gallery security guard found at a gay gathering spot on the French bank of the Rhine. A damaged painting of a shoemaker found near the body motivates the inspector almost more than the fact of murder.

Aliette identifies with the image of a dedicated artisan working in solitude. With love dissolving, her work has become all-consuming. Aliette doesn't know it at the outset, but her investigation coincides with a Swiss police investigation into the murder of a well-known Basel art restorer. It quickly becomes obvious to her that an art fraud conspiracy is at the source of both crimes. While known for her unconventional methods, Inspector Nouvelle is also known for getting results; but will the territorially minded Swiss police who ought to be her allies keep her from closing the case?

Agent Franck Woerli was pleased to do a favour for the French cop. As a member of FedPol, the Swiss Federal Criminal Police, Woerli's purview was both extra- and international. And his inclination was to do what he could to counter the smallminded actions of too many local counterparts. He knew all about the sort of petty-minded crap Basel City Police Commander Heinrich Boehler threw in the way of what should have been straightforward, coordinated information sharing amongst police.

Boehler was devoutly pro-gun, very active in ProTell, the Swiss version of the NRA. He routinely blocked the sharing of gun registry information out of an inflated and retrogressive sense of patriotism attached to the national reputation for guarding privacy at whatever cost, and especially from foreigners. Franck Woerli was quietly ashamed to be even remotely associated with the likes of Heinrich Boehler. He was glad to make the call for Inspector Nouvelle. They had accomplished good things together, the latest being their central role in bringing down a trans-Euro hashish importation ring. About four years ago? Time flew. Woerli had been deskbound lately, investigating payroll fraud. But his desk had a phone and he had rank. He used it and extracted the required information.

He got back to her within the hour. The gun was registered to VigiTec, the security firm where her victim was employed.

'Merci, Franki. It's what I feared...' A pause. A pause he could feel. In that French voice he did enjoy, she put it to him. 'In the mood for some work, Agent Woerli?'

'I would love it, Inspector. Unfortunately I'm up to my ears in payroll tax fiddles. Not too exciting, to say the least, but with all the migrant workers flowing in, it's big a problem. And you know, a simple murder, I think you may have to work this one with the Commander.'

'But it's not so simple...' Aliette Nouvelle hesitated again at the other end of the line. Then, with a what-the-hell kind of sigh, she said, 'We also have a painting. Probably Swiss-owned.' She described the ruined piece found near the victim. 'Art means you people, not Boehler, yes?'

'Normally, but not absolutely.' Woerli paused to open the newspaper on the desk in front of him -- they'd moved Monday's headline story to page three. 'You say Friday night?'

'That makes two in...looks like the same day. Art-related murders, I mean.' He filled her in. Justin Aebischer, a well-regarded Basel art restorer, had been murdered on or about Friday afternoon or evening. Found Sunday on his back patio, sodden with the past weekend's rain, a bullet through his head. 'Not here. Biel. A village an hour out of town. Perp came up from the forest, through his garden and shot him. He worked there, studio's in his basement. So --'

'So that is interesting, Franki. Justin Aebischer. Did a painting go missing?'

'They are not saying much about that. As usual, it's someone else's business.' In the same way Swiss democracy affords cantonal politics maximum leeway for laws and structures, the Swiss policing system confers maximum control on canton forces. Thus Heinrich Boehler could rule Basel City canton like the Sheriff of Nottingham. And whoever ran the Basel Lands force would have complete jurisdiction over the past weekend's murder in Biel.

'But, Franki, if a Swiss painting ends up in France?'

'But,' he said, quiet and patient, 'we won't know that until they decide to tell us.'

'No.' A pause. Franck Woerli wondered if the French cop could hear his weary resignation.

In that French pause, FedPol Agent Woerli reflected bitterly as to how he hated payroll fraud. Strictly numbers, dry as a bone. Only saving grace: it was an extra-territorial issue, no question, and he could actually close a case. Trying to work in a coordinated manner with the cantons was worse than frustrating. It was soul-killing.

She repeated, 'Do you know a place called Zup?'

'A club. A gay nightclub in the old city.'

'No...' Another noticeable pause. 'Can you find out more about this Justin Aebischer?'

'Bring it to me. I'll buy you lunch. At the Rembrandt.'

She could not see it from France, but the offer brought a spontaneous smile. 'I would enjoy that. Give me a day?'

'You are most welcome. I look forward to seeing you again.'

And to lunch. That Dutchman who ran the place where they met whenever he made the trip to the otherwise dull city up the road -- van Hoogsomething? -- was a genius with carp taken from the streams in the forestlands along the border. The pleasing thought of a special meal and a few hours in the company of Inspector Nouvelle left Franck Woerli staring out at the Rhine. A tiny section was always there, visible from his office in a sixth-floor suite on Freiestrasse, just where it met Eisenstrasse. The humidity had blown away with a predawn shower. Today the river ran silvery and energetic on a blustery overcast morning.

A body. Art-related? He wondered what it held in store.

Amazing how a phone call will poke a hole in the greyness that settles on the soul.

The fourth in Brooke's crime-mystery series involving Aliette Nouvelle as a French senior inspector serving with the Police Judiciaire, it centres on a diligent female detective stuck in provincial Alsace near the Swiss and German borders. Nouvelle is a ten-year veteran tied up with the usual risky traffic along the Rhine River -- illegal immigrants, drugs, and stray floating bodies. Her live-in affair with Claude Neon, her superior officer at the P.J., is on the rocks. Piaf, her old warrior cat, is dead. She's a cop with ambition that could use a case to solve involving travel.

When an art restorer is found dead an hour down the road in Basel, and a second body drifts downriver, Nouvelle has her exit ticket. But not before a pair of dodgy clues surface: the second corpse appears to have been clubbed to death with a picture frame. The river beach where the victim is found is also a known after-dark gay rendezvous. And so Madame Inspector descends on Basel's international art scene for answers in a barf-green police loaner vehicle.

Agatha Christie gave the world an unbeatable formula for murder mysteries -- a crime, an upmarket social setting, plenty of red-herring characters, and a dogged investigative mind intent on bringing the perpetrator to justice. What Brooke, who writes from Montreal, brings in addition is a convincing familiarity with forensics, detailed knowledge of the art trade, and an ability to breathe life into his depictions of French culture as the novel develops. His skill at probing into the venalities of professional art dealing is also impressive. Brooke's characterizations too, draw the reader in. Working in a generally unfamiliar territory in one of her country's less glamorous regions, Nouvelle emerges as an engaging figure and grows more likeable the farther away she is from her partner-boss who never really evolves much beyond a stiff official. The inspector's inquiries lead into murky Swiss banking and museum offices dominated by rank, money and obsessive secrecy. A slurry of cosmopolitan references to Sinatra, Johnny Hallyday, razor-sharp private security firms, and Nouvelle's taste for black, but slightly reserved lingerie, keep the Basel action sufficiently above cuckoo-clock portraiture, but never too far from its workaday mustard-sausage and beer culture either. The gay bar scenes are weirdly campy enough to feel honest.

Brooke's secondary characters -- other police officers, pimply delinquents, museum and gallery personnel, freelance arts technicians -- are well-realized. Nouvelle's emotional range, if not Jungian in complexity, deepens too: "Aliette didn't know if she was going to sleep with agent Rudi Buchholtz -- but it was a notion she was willing to explore." She's not your regular Miss Marple.