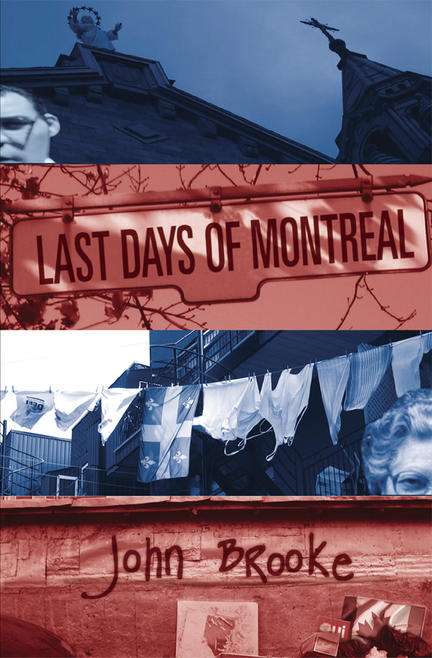 Montreal is a city that has always represented the ideal of languages and peoples meeting, mixing and producing a culture greater than the sum of diverse parts. Last Days of Montreal travels through an imaginary cityscape, powered by apples, beer, the dream of love, and a dark but determined joie de vivre which Montrealers adopt to survive the rising tide of bitter political schism, economic downturn, language laws, record snowfalls, crumbling streets and a baseball team on the verge of disappearing. The locus is a quiet enclave in the north-east end.

Donald is an idealistic anglo from Toronto who came to Montreal on the strength of his father's "Liberal" hopes. But Pascale, his pure-laine wife, is inspired by a messianic "Lucien" and she sees the future differently. Bruce is a divorced Montreal-born anglo from the West Island, a failing stockbroker and an uncertain father, who is struggling to build a new life on the East Side where he now lives with Genevieve, a French ex-pat and freelance translator. Bruce sees the blue and white Quebec flag everywhere he looks, but when he tries to explain the "near-death experience" his country suffered in the referendum to Genevieve, she is not as sympathetic as he might wish. She is concerned with something beyond politics.

If Bruce and Donald represent a cry from the middle-class, horrid Last Days is their hyper-echo. Loud and legless, Last Days is a dissolute tramp, a self-appointed profit of doom, wheeling around in his electric wheelchair, warning all citizens that Montreal is killing itself with this ridiculous French/English political war. Last Days' world is the downtown streets. But a fateful meeting on the Cartier Bridge sparks love. A true Montrealer, Last Days heads into the north end, in search of his heart's desire.

The time span is from the early 90's through to a blessed spring following the Ice Storm of January 1998. At its centre is that cold, nerve-wracking day in November 1995. Last Days of Montreal is emotional history.

The Jean Talon Market is a cultural crossroads in the north end of the city proper. The stalls in the centre are owned mainly by Quebecois farmers selling fruit, flowers, vegetables and eggs. But there is an Italian with his own kind of tomatoes, an Anglo egg man called Syd. Merchants in the shops surrounding are Greek, Italian, mid-eastern and north African...with one Quebecois butcher, baker, one more selling fruit. Everything is fresher and cheaper, and every sort of Montrealer goes there. Some Chinese can even be spotted, lured away from their own market downtown, and also some regulars from the cluster of Thai and Vietnamese grocery stores two blocks away at the corner of St. Denis. Any politician fighting for the hearts of the people will naturally find his way to the market, to glad-hand and smile, and be seen with all the various kinds of faces. Look! says the image: our bustling community, happy together amid the bounty of our land.

It was May and finally warm. Six months of soul-draining winter lay between the comfort of that morning and the cold night of the former Premier's ugly words in the face of a most narrow defeat. The idea of partitioning Quebec still simmered, but without the fervour of those initial cries of war. It was a good time to start reaching out again. The new Premier showed up in corduroy and cashmere with his wife, two sons and the usual entourage of handlers and media representation.

Geneviève and Gaston had adjusted to Bruce on a Saturday. They dealt with it without a blink. And they surpassed themselves when Micheline would decide to work the weekend, with the silent daughter behind her, keeping the $1 and $3 baskets full.

Bruce was deliberating between Cortland and McIntosh when everything suddenly stopped. A crowd formed and pressed close. Lights went on over the eyes of the cameras. Gaston pushed the hair off his forehead and Micheline, looking good in tight denim (Geneviève always gave credit where it was due) beamed as the two boys sampled her apple juice. The Premier chose a basket of Lobos, and, being from Lac St. Jean, made a glib comment about blueberry season, still a good three months away.

"We close up for three weeks," joked Gaston. "They make our apples lose their point."

That was untrue. Les Pommes Le Gac was never closed. But it sounded good and everyone laughed.

Then Micheline presented his wife with a bottle of the cider vinegar. It came with Gaston's small brochure explaining both the gastronomic and medicinal uses. The woman, an American, seemed impressed.

Yet no one paid for the apples. Geneviève wondered if anyone else had noticed. Perhaps money was not a part of this sort of thing, and someone else took care of it later. Then the Premier, just another shopper with a sack of fruit, moved to shake some hands.

What are you supposed to do? It's Saturday, the market...Geneviève took his hand, looked into the baleful eyes and said, "Bonjour."

But Bruce, who was beside her, said, "Are you kidding? No way!"

"Dommage, monsieur." In that rumbly voice.

"Hell of a lot more than a pity, monsieur."

"I mean your manners. You are very rude."

Geneviève watched it from that distance she had been allowing herself to feel, the voice inside saying oh, these people...and still from that removed vantage as Bruce was suddenly yanked away from in front of the Premier's face -- and smacked. By Micheline.

"Va-t-en! we don't want the likes of you around our stall!"

"No...I'm sure you don't," said Bruce when the blush had faded. "Well, to hell with you and your apples, madame. Your children won't thank you when they wake up in the Third World!"

A dour man in sunglasses made a move, but Bruce indicated there was no need. The cameras panned away from the Premier, following as Bruce pushed through the throng and walked away.

Geneviève hurried after him. Of course she did.

Her aventure was over before the next weekend. Gaston's daughter had said something in the aftermath of the ugly incident. Something about la Française, the Anglo's wife. Yes, he knew she was not Bruce's wife. That was not the point. He was someone's husband and that someone had caught on. Gaston said that's it --fini.

Geneviève would have said the same thing, regardless of his wife, la militante. It was as good a time as any. She and Bruce would be gone by mid-June, back to the village in the south -- for a month this time. She would be recharged. Maybe they would be renewed. Even Bruce wouldn't be able to think about his politics with all those topless teenagers wandering around on the beach.

But that was cynical and, happily, something that was burned away by the Mediterranean sun.

Because she had watched the thing on television, in both English and in French, and then again at eleven, with the sound turned off. In fact she had taped it, and watched it again, alone, brown and relaxed, the night they got back. Geneviève watched herself: her reaction; the way she went straight-away after her man -- no hesitation. She realised she had a purpose, if not a cause, right there in Montreal. A passion for something new had brought her life to Canada and now she was involved in it. The place and its people. She had been re-attached through love. Yes, she thought -- it had to be. It was there on Canadian television...just look at my face: Jeanne Moreau. Arletty. Deneuve or Fanny Ardant. Very noble. Very knowing. Very right. Surely Gaston would have watched and seen as well.

Bruce never knew. For his sake, Geneviève bore the prick of feeling like an enemy whenever she passed Micheline Le Gac, there most days now, defiant in her stall. The apples were just as good at the other end of the market. Apples are apples. Unfortunately none of the other merchants were as ambitious or creative as Gaston when it came to developing spin-offs. No more cider vinegar. Although her scalp itched in the dryness of the next winter (Bruce's too), Geneviève forced herself to live with it. Besides, it was $10 a bottle -- an outrageous amount to pay for vinegar.

There would be something in France to solve the itching. They would find something the next time they went, and bring it back.

Last Days of Montreal follows Yeats' adage about writing on sex and death. The novel is ribald, serious and fun, and it treats the "death" of Montreal with humour. Serious in its attention to political, economic and social forces in Quebec, and fun, with its light, love, eroticism and grace in many guises.