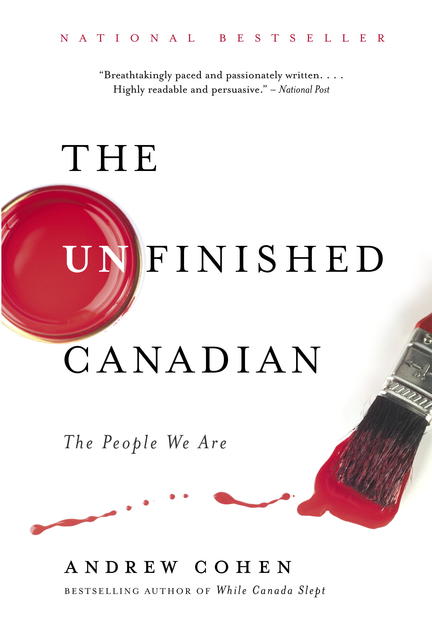 The award-winning, bestselling author of While Canada Slept gives his view of a country wasted on Canadians.
What is national character? What makes the Americans, the British, the French, the Russians, and the Chinese who they are? In this homogenized world, where globalization is a byword for a deadening sameness, why do peoples who live in the same region, use the same money, read the same books, and watch the same movies remain different from one another? As much as Canada may be seen as a copy, clone, or colony of America, we are unquestionably distinctive. It is a result of our geography, history, and politics. It comes from our demography and prosperity. Most of all, it comes from our character.

In The Unfinished Canadian, Andrew Cohen delves into our past and present in search of our defining national characteristics. He questions hoary shibboleths, soothing mythologies, and old saws with irreverence, humour, and flintiness, unencumbered by our proverbial politeness (itself a great misperception) and our suffocating political correctness. We are so much, in so many shades, and it’s time we took an honest look at ourselves. In this provocative, passionate, and elegant book, Cohen argues that our mythology, our jealousy, our complacency, our apathy, our amnesia, and our moderation are all part of the unbearable lightness of being Canadian.

Excerpt: The Unfinished Canadian: The People We Are (by (author) Andrew Cohen)

Pondering ourselves is the occupational hazard of being Canadian. The Canadian Identity, as it has come to be known, is as elusive as the Sasquatch and Ogopogo. It has animated — and frustrated — generations of statesmen, historians, writers, artists, philosophers, and the National Film Board. Still, we try. “How could we assemble a collection of stories that would truly represent everything that Canada is — and everyone who lives there?” asked the earnest editors of Chicken Soup for the Canadian Soul. “At some point it became apparent that we simply could not.” Instead, they published the reflections of Canadians about themselves and called it Canada. Some are saccharine, some are deeply affecting. But ultimately their chicken soup is thin gruel; it never really hits the spot. Canada resists easy definition.

In 2000, Canadians saw themselves in “The Rant,” a popular beer commercial. “I have a prime minister, not a president . . .” Joe Canadian fumes. “I speak English and French, not American. I believe in peacekeeping, not policing; diversity, not assimilation.” Well, it was a point of view, as they say, and characteristically, it was largely cast in the form of what we are not. At other times, we have seen ourselves in the novels of Margaret Atwood, Margaret Laurence, and Robertson Davies, the plays of Michel Tremblay, or the stories of Roch Carrier. Or the humour of Stephen Leacock or the history of Donald Creighton. Pierre Berton famously described the quintessential Canadian as having a capacity to make love in a canoe, proving that Canadians are both amorous and amphibious.

“I suppose that a Canadian is someone who has a logical reason to think he is one,” writes Mavis Gallant, the expatriate Canadian, in an introduction to a collection of her short stories in 1981. “My logical reason is that I have never been anything else, nor has it occurred to me that I might be.” From the beginning, we have looked for that reason, logical or visceral, so much so that we may think that we are unique in our search for ourselves. We aren’t alone. In recent years, China, Taiwan, Denmark, Syria, Mexico, and other nations have questioned their identity. Samuel P. Huntington, the prominent American political scientist, says the United States is now among them. “America is not unique in having an identity problem,” he says in Who Are We?: The Challenges to America’s National Identity. “Debates over national identity are a pervasive characteristic of our time. Almost everywhere people have questioned, reconsidered, and redefined what they have in common and what distinguishes them from other people: Who are we? Where do we belong?”

The Unfinished Canadian looks for the answers in our experience — our past, our politics, our practices, our leaders, our institutions. All shed light on our shadowy selves. Rudyard Griffiths, the imaginative co-founder and executive director of the Dominion Institute, which promotes the study of the history of Canada, notes that it was “institutions and not the free play of ideas that Canadians came to rely upon in entrenching a common civic culture. From the exploits of the Royal Canadian Mounted Police to the driving of the Last Spike on the CPR, the country’s history is filled with larger-than-life stories of how founding institutions tamed a continent and defined Canada’s national character in the process.”

Some of our characteristics as a people are clear. Some are contradictory. As much as this is a self-portrait, it is painted in broad brush rather than short strokes. Of little interest are the hoary shibboleths, the soothing mythologies, and the old saws that dominate our conversation. If we can find it, a little irreverence, unencumbered by our proverbial politeness and suffocating political correctness, would be refreshing. There is so much that we are, in so many shades and hues. A study like this, which makes no claims to be comprehensive, is limited by its very nature. How to assign elements of character to a diverse, eclectic country of almost 33 million souls? How to decide which to include? Is our character not to have a character, as some suggest? The approach here is to draw on contemporary examples from our political and civic life, as well as our history. A disclaimer: this book is unscientific, selective and subjective. In offering examples, it makes no claim to regional, linguistic, or ethnic balance. It has commissioned no surveys, though it occasionally draws on them. Nor does it present a statistical portrait of Canada, much as statistics are sometimes useful, too.

This is a mix of reportage and reflection. If the tone is more critical than congratulatory, blame a journalist’s natural skepticism. But to look critically at Canada in 2007 isn’t to endorse the high priests of pessimism who always see darkness. In our worst times, such as the referendum of 1995, they believe that Canada is a failure and bet on it. In their world Quebec is always leaving, the dollar is always falling, crime is always rising, and the future is always fading. It is a view of the country that has inspired books called The End of Canada and Breakup.

Then again, how many other nations have spent their lives asking themselves: Will we survive? Today, on the 140th anniversary of Confederation, our challenge is to be frank about our country and our prospects. Too often we avoid what is uncomfortable or unattractive about ourselves. We revere home truths and avoid hot buttons that could help us understand one another, preferring to dine on our warm purée of platitudes and consommé of clichés.

“An incendiary new book ... that will anger many readers but make many others wish Cohen was prime minister.”
- Ottawa Citizen
“Breathtakingly paced and passionately written … the book is an unequivocal -- and unapologetic -- national manifesto of a reinvigorated brand of Canadianism .… A highly readable and persuasive tract.”
- National Post

“A magnificent book taking the country by storm.”
- Calgary Sun
“Cohen is such a gifted complainer that he is great fun to read whether you agree with a given point or not.” - Maclean’s

“The social anthropologist of the tribe Canuck.”
- Winnipeg Free Press
“Gutsy and thought-provoking … a sparky and engaging contribution to the canon of works.”
- Edmonton Journal
“A splendid new book.”
- Toronto Star
“Andrew Cohen ... gazes anew at the national navel. His observations make for irresistible reading for the same reason that people enjoy looking into the mirror.”
- Vancouver Sun

Praise for While Canada Slept:

“Cohen’s contribution is invaluable. A book full of . . . rich detail, written with passion and engaging prose. . . . A must read for all of those who wish to understand the roots of Canada’s global outlook.”
- Globe and Mail
“A trenchant critique of modern Canadian foreign policy.”
- Time

Other titles by Andrew Cohen

John F. Kennedy and the 48 Hours that Made History

Lost Beneath the Ice

The Story of HMS Investigator

How We Lost Our Place in the World

The Life and Legacy of Pierre Elliott Trudeau