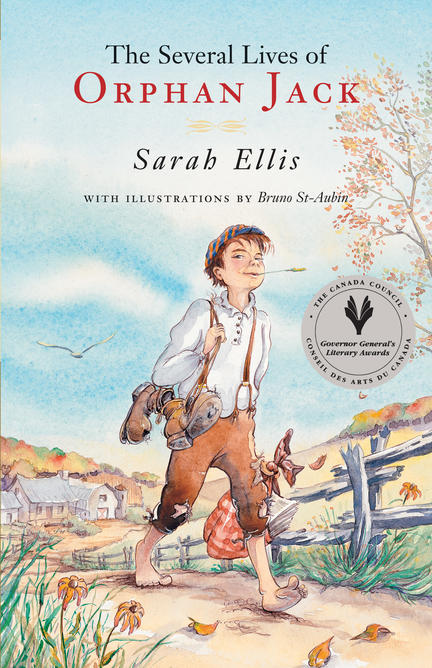 For young Jack, life is tough at the Opportunities School for Orphans. But Jack is good at staying out of trouble. He has skipped over trouble, danced around trouble, slid under trouble, melted away from trouble, talked his way out of trouble and slipped between two close troubles like a cat through a picket fence.

When Jack turns twelve, he is given the biggest opportunity of all, but suddenly his life is nothing but trouble. Still, he is a clever and resilient boy, and eventually he makes his way into the big world. Jack is rich in ideas, and soon he finds there is a place for an enterprising boy who has whims, concepts, plans, opinions, impressions, notions and fancies to spare.

BRUNO ST-AUBIN has illustrated over sixty children’s books, including nine in the Nicholas series, Sadie the Ballerina and George’s Antlers. His favourite activities when he is not illustrating include soccer, cross-country skiing, cycling, jogging and playing hockey. He lives in Quebec.

...there is real strength in Ellis's turns of phrase, use of imagery, and alliteration, and in showing readers the power of words and ideas to liberate the imagination.

Told with the outsize zest of a tall tale, this vibrant, well-crafted novel starts strong and gets even better.

Ellis has created a small gem here, with messages about following your heart tucked into the sentences, phrases, thoughts, and ideas that she seamlessly weaves together.

The playfulness of this picaresque short novel is utterly engaging. Words, words and more words, alliterative pairs of words like villains and volumes, scholars and scoundrels, toffee and tyrants, fall in torrents from the pages...

This special book is filled with often humorous and extraordinarily rich descriptive prose that is always a pleasure to read and full of surprises.

[An] agile tale about wanderlust and the power of words. Ellis demonstrates through her creative - and often surprising - use of metaphor that an active imagination and rich vocabulary are a healthy combination.

Other titles by Bruno St-Aubin