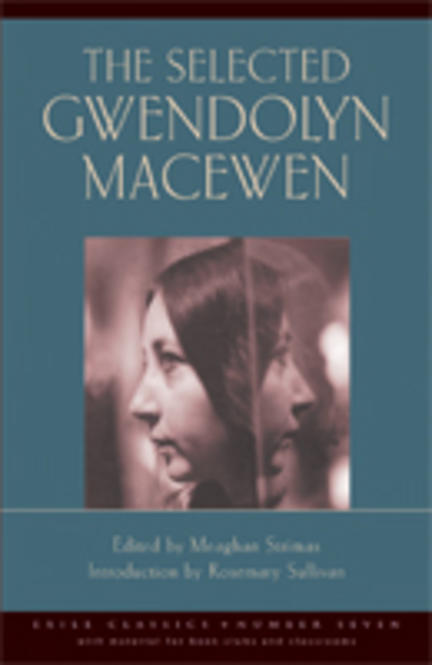 Spanning Gwendolyn MacEwen's career from the late 1950s to the early 1970s, this is a comprehensive collection of work by one of the greatest women writers of the 20th century. It traces the trajectory of her verse and the development of her fiction and drama, and includes letters, paintings, and photographs from the oeuvre of this beloved Canadian poet.

Gwendolyn MacEwen was born in Toronto in 1941 and died there in 1987. A writer of great talent and versatility, she wrote novels, travel books, children's books and radio drama, as well as poetry books including The Shadow-Maker (1969) and Afterworlds (1987), both of which won Governor General's Awards. She published two collections of short stories, Noman (1972) and Noman's Land (1985), which includes "The Other Country," a prize winner in the 1983 CBC Canadian Literary Awards.

Meaghan Strimas is the author of three poetry collections, Junkman's Daughter, A Good Time Had by All, and Yes or Nope, which was awarded the Trillium Book Award for Poetry (2017). Strimas is also the editor of The Selected Gwendolyn MacEwen. She grew up in Owen Sound, Ontario, and lives in Toronto, where she is a professor in the Department of English at Humber College and the editor of the Humber Literary Review.

BARRY CALLAGHAN founded the internationally celebrated literary quarterly, Exile, and imprint, Exile Editions, while he was a war correspondent in the Middle East and Africa in the 1970s. He is a novelist, poet and journalist and his work has been much anthologized. His numerous awards include Toronto’s One Hundred Outstanding Citizens Award, the inaugural W. Mitchell Award and the Foundation For The Advancement of Canadian Letters Award for Fiction which he was honoured with twice.

"The voice . . . speaks directly and plainly to that which is the deepest part of our humanity."  —The Globe and Mail

Other titles by Gwendolyn MacEwen

King of Egypt, King of Dreams

Other titles by Meaghan Strimas

A Good Time Had by All

Other titles by Barry Callaghan

The Exile Book of Toronto Stories

The Way the Angel Spreads her Wings

A Kiss is Still a Kiss

When Things Get Worst