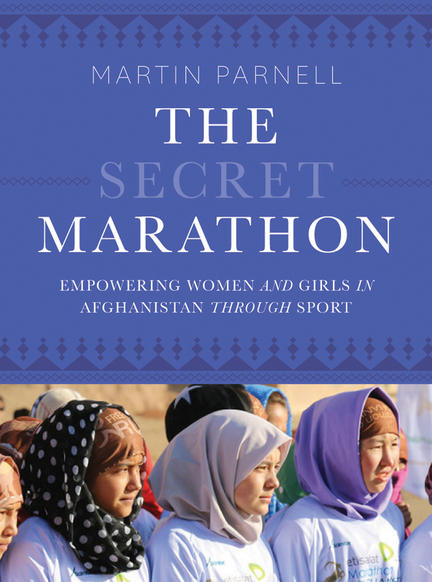 Martin Parnell's third book highlighting the power of sport to change lives takes the reader on an inspirational journey into Afghanistan, a country known for political chaos and female oppression.

“The children were stoning us, the people said bad words like ’prostitutes, why don’t you stay at home? You are destroying Islam.’” —Zainab, Afghanistan's first female marathon runner

In 2016, Martin Parnell went on a journey that many believed was madness: running a marathon in Afghanistan in a quest to fight for women’s rights and gender equality. Of course, this was not the first time he had been called crazy. In 2010 he had run 250 marathons in one year and in 2013 he had climbed Mount Kilimanjaro in 21 hours. These two endeavours were part of his “Quest for Kids" initiative, which raised $1.3-million for the humanitarian organization Right To Play and had given the gift of hope to over 27,000 children around the world.

It was while recovering from a life-threatening and rare blood clot on his brain that Martin had read about Zainab, the first woman to run a marathon in Afghanistan. He was so inspired by her story that he decided that if he was able to recover from his illness he would run with her at the next “Marathon of Afghanistan” in support of rights for girls and women.

In The Secret Marathon, readers will be transported to a country of beauty, hardship and complexity, sharing in the despair, resilience and friendliness of the Afghan people as they strive for freedom and equality for themselves and their fellow citizens.

"Martin and the many other characters in this book dropped me on the war torn streets of Afghanistan to walk a mile in the shoes and under the hijabs of the courageous women and girls who continually fight for their basic right to run. Danger lurks everywhere. But the desperate need to be free and equal outweighs the risks, and so the girls keep running – vulnerable, hated at times for their passion, but moving forward and not taking no for an answer." - Treeline Journal

"Perspective shift. That is what this book will offer you, humbly, as it opens your eyes to the running scene in a far away corner of the world." - Treeline Journal

Changing Lives Through the Power of Sport