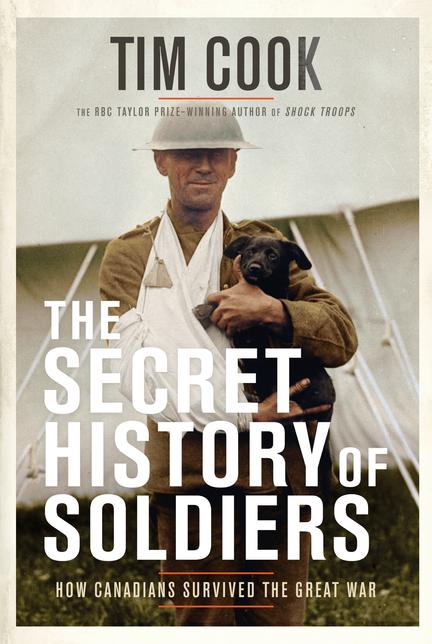 There have been thousands of books on the Great War, but most have focused on commanders, battles, strategy, and tactics. Less attention has been paid to the daily lives of the combatants, how they endured the unimaginable conditions of industrial warfare: the rain of shells, bullets, and chemical agents. In The Secret History of Soldiers, Tim Cook, Canada's foremost military historian, examines how those who survived trench warfare on the Western Front found entertainment, solace, relief, and distraction from the relentless slaughter.

These tales come from the soldiers themselves, mined from the letters, diaries, memoirs, and oral accounts of more than five hundred combatants. Rare examples of trench art, postcards, and even song sheets offer insight into a hidden society that was often irreverent, raunchy, and anti-authoritarian. Believing in supernatural stories was another way soldiers shielded themselves from the horror. While novels and poetry often depict the soldiers of the Great War as mere victims, this new history shows how the soldiers pushed back against the grim war, refusing to be broken in the mincing machine of the Western Front.

The violence of war is always present, but Cook reveals the gallows humour the soldiers employed to get through it. Over the years, both writers and historians have overlooked this aspect of the men's lives. The fighting at the front was devastating, but behind the battle lines, another layer of life existed, one that included songs, skits, art, and soldier-produced newspapers.

With his trademark narrative abilities and an unerring eye for the telling human detail, Cook has created another landmark history of Canadian military life as he reveals the secrets of how soldiers survived the carnage of the Western Front.

TIM COOK is the Great War historian at the Canadian War Museum, as well as an adjunct professor at Carleton University. He is the author of five other books, including Shock Troops, which won the prestigious Charles Taylor Prize for Literary Non-Fiction in 2009. He was also awarded the Ottawa Book Award and the J.W. Dafoe Prize for At the Sharp End. Cook lives in Ottawa with his family.

Excerpt: The Secret History of Soldiers: How Canadians Survived the Great War (by (author) Tim Cook)


In the soldiers’ songs, the patriotic discourse of the home front, with its exalted speech-making of one more push, was buried under a chorus of deliberately shocking satire, anti-conformity, relentless vulgarity, and merry-making. This was the grousing of everyday soldiers put to song. The cynicism expressed in the songs did not mean that the soldiers were willing to give up or embrace defeat. In fact, to sing about the army discipline, which in its extreme form was much hated, or about escaping the trenches, was a way of coping with the strain at the front and finding strength to go on. Chester Routley of the 18th Battalion was so taken with one untitled and impertinent song that he wrote it down from memory in his postwar memoirs:


These satirical send-ups also allowed for the trivialization of mud, lice, and sudden death. In the strange world of the trenches, where lives were ruled by fate or military discipline, one simply had to grin and bear it. This sentiment was expressed in many ways, but the soldiers’ song “Never Mind” (also known as “If the Sergeant Steals Your Rum”) captured it well:


Some troops added their own fun to the lyrics by mimicking officers or NCOs, either in speech or tone, to personalize the song for their comrades.

Though soldiers liked to take their superiors down a notch, reminding those in power that the rank and file were on to their tricks, they reserved a special vitriol for those at home who would not fight. The anonymous satirical attack on conscientious objectors, “I Don’t Want to Be a Soldier,” was sung with vigour:


“It won’t be good to be a chap who stayed at home, when the boys return,” wrote one Canadian stretcher-bearer in a letter about those young men who did not serve. “This thing is just a bit too serious. We know what it is here.” Motivated by anger at the unfair burden shouldered by those at the front, many soldiers dreamed and sang lustily about postwar revenge against the slackers at home and their own abusive superiors. The moving “When This Lousy War Is Over,” which was sung to the tune of “What a Friend We Have in Jesus,” fantasized about postwar payback.


Such feelings of anger and discontent could be aired safely in the songs, in a way that they could not be presented in private letters home, which were censored, or in direct talk with superiors, which could result in confrontations and punishment.

There were also multiple songs devoted to the popular subjects of booze and sex. “Here’s to the Good Old Beer” and “Drink It Down” were celebrations of alcohol, and even abstainers were known to join in to the chorus to be a part of the social activity. The songs of drink quenched a thirst of the spirit and facilitated male bonding. The rough culture of the soldiers was revealed more boldly, and bawdily, through sexual songs such as “My Nelly, Skibboo,” “I’m Charlotte, the Harlot,” “Oh, Florea’s [or Florrie’s] New Drawers,” and “Three German Officers.” The most famous dirty song of them all, “Mademoiselle from Armentières,” with its ever-changing and increasingly vulgar lines, is known to have at least 700 recorded versions. And this doesn’t include most of the unprintable ones, with the lyrics degenerating into incest and bestiality. “Certainly some of the verses we sang were pretty ripe,” said Ernest Black in his memoirs, with little more than a literary shrug.

The more blasphemous the song, the more it was sung with gusto, with some of the raunchiest songs being belted out on the march. Soldiers were not known as foot-sloggers for nothing, and it was not uncommon for them to march in their heavy hobnailed boots for kilometres behind the lines, carrying gear weighing more than sixty pounds. Lieutenant Thomas Dinesen, a Danish national who enlisted in the CEF and would later receive the Victoria Cross for fierce fighting at the Battle of Amiens, recounted the joy men took in shouting irreverent lyrics while on the march:


Again and again we go back to the good old Pack Up Your Troubles; or else we roar so that the whole countryside may hear: The Gang’s All Here! But the best of the lot is the everlasting and ever-varying song of Mademoiselle from Armentières:


It continued, “Oh, madam, have you a daughter fine? Yes, I have a daughter fine. Then …” Our imagination pictures the continuation of the song in lusty and vivid colouring, although in any case we have now turned our back on all such pleasures for some time to come.

Excerpted from The Secret History of Soldiers by Tim Cook. Copyright © 2018 by Tim Cook. Published by Allen Lane, a division of Penguin Random House Canada Limited. Reproduced by arrangement with the Publisher. All rights reserved.

A Globe and Mail Bestseller

“It’s a reminder, an often grim one, that humans are resilient, capable of enduring the most harrowing of experiences.” —The Toronto Star

“an insightful and readable narrative…At once heartwarming for the reminders of a simpler time and heartbreaking for the unimaginable losses of a century ago…it will breathe added life into all other Great War books.” —Esprit de Corps

“Cook has revealed many of the secrets of the Great War’s soldiers’ lives. The veil of secrecy has been lifted and every chapter can be read over and over.” —The Winnipeg Free Press

Other titles by Tim Cook

Medical Care and the Struggle for Survival in the Great War

The Fight for History

A Nation Shaped by War

The Battle and the Legend

Manpower in the Canadian Expeditionary Force, 1914-1918

Fight to the Finish

No Place to Run

The Canadian Corps and Gas Warfare in the First World War

Canadian Historians and the Writing of the World Wars