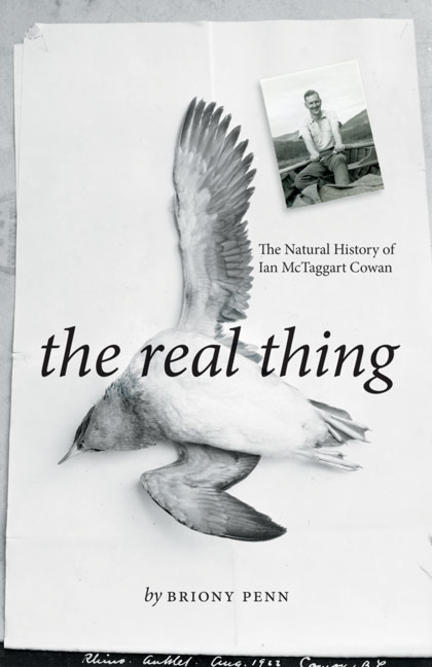 The Real Thing is the first official biography of Ian McTaggart Cowan (1910–2010), the “father of Canadian ecology.” Authorized by his family and with the research support and participation of the University of Victoria Libraries, Briony Penn provides an unprecedented and accessible window into the story of this remarkable naturalist. From his formative years roaming the mountains around Vancouver looking for venison to his last years finishing the voluminous and authoritative Birds of British Columbia, Cowan’s life provides a unique perspective on a century of environmental change—with a critical message for the future.

As the head and founder of the first university-based wildlife department in Canada, Ian McTaggart Cowan revolutionized the way North Americans understood the natural world, and students flocked into his classrooms to hear his brilliant, entertaining lectures regarding the new science of ecology.

During his academic career, Ian McTaggart Cowan stepped outside the narrow confines of academia to pioneer nature television. His television programs in the 1950s and ’60s, Fur and Feathers, The Web of Life and The Living Sea, made him a household name around the world by capturing the first microscopic organisms on TV and bringing a live moose into the studio. He was also responsible for hiring a young David Suzuki, who followed in his nature-show-host footsteps.

Cowan’s early work in the national parks became the foundation for wildlife conservation and environmental education in Canada. And like his US counterpart and colleague Aldo Leopold, he was part of a secret fraternity that practised a reverence for wildness and influenced three generations of scientists and politicians on everything from conservation of endangered species to the dangers of pesticides and climate change, long before these topics were generally acknowledged.

In his 80s he was still pioneering new ways to communicate nature through ecotourism, and well into his 90s he was still mentoring young ecologists. Cowan’s last publication at age 91 was the final volume of Birds of British Columbia, which the Royal BC Museum called “one of the biggest publishing events in Canadian history.”

Illustrated throughout with colour and black-and-white photos from all aspects of Cowan’s life, The Real Thing takes the reader on an adventurous and inspirational journey through the heart of North American ecology, wilderness, landscape and wonder.

Penn shares Cowan’s deep love for this province. With thoughtful, graceful storytelling, sombre at losses but ultimately hopeful, she invites us to explore another kind of Wonderland, another set of intimate, secret lives. It’s an opportunity to be, as Penn was as a child, amazed at where science can take your mind and heart.—Amy Reiswig, Focus Magazine

The broader contribution of The Real Thing, however, is its illumination of a conservation philosophy that meshes intellectual inquiry with direct engagement and a fierce love of place. Cowan clearly valued his intellectual heritage, his legacies, and his information-sharing networks—whether the subtle correspondence of a secret society, the formalities of an international policy council, or the exchange of tales around a campfire. Equally clearly, he viewed conservation as the work of individuals, not institutions. Readers everywhere who aim to be part of this living body of work, whether they’re studying landscapes or protecting whales, will find Penn’s biography of Cowan to be informative, inspiring, and empowering.—Darcy Dobell, Hakai Magazine

Briony Penn’s The Real Thing: The Natural History of Ian McTaggart Cowan is as much a biography of Cowan as a tribute to the BC landscapes and animal species he was fascinated by, many of them since lost to a century of destructive development. This detailed and highly engaging exploration of Cowan’s life, and the places and species that shaped his career and his thinking as a scientist, captures the wonder that Cowan felt for the natural world and the “insatiable appetite” for local knowledge that he held throughout his life.... Penn’s elegantly written and insightful biography will engage a wide range of readers, from BC naturalists and wildlife professionals to students of biology, environmental studies, and the history of science.—Jennifer Bonnell, BC Studies

Cowan was a vibrant individual who lived a most interesting life through dynamic times. Penn’s perspective will reward all those with interests in the evolution of our relationships with the natural world.—Ross Peck The Wildlife Professional

The Real Thing is a highly recommended tome of over five hundred pages documenting the life and times of Ian McTaggart Cowan.—Robert Maher, Gogeomatics Magazine

BC Books From the Cariboo