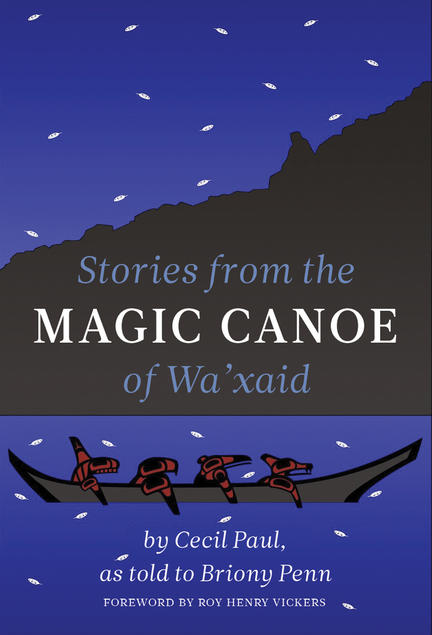 A remarkable and profound collection of reflections by one of North America’s most important Indigenous leaders.

My name is Wa’xaid, given to me by my people. ‘Wa’ is ‘the river’, ‘Xaid’ is ‘good’ – good river. Sometimes the river is not good. I am a Xenaksiala, I am from the Killer Whale Clan. I would like to walk with you in Xenaksiala lands. Where I will take you is the place of my birth. They call it the Kitlope. It is called Xesdu’wäxw (Huschduwaschdu) for ‘blue, milky, glacial water’. Our destination is what I would like to talk about, and a boat – I call it my magic canoe. It is a magical canoe because there is room for everyone who wants to come into it to paddle together. The currents against it are very strong but I believe we can reach that destination and this is the reason for our survival. —Cecil Paul

Who better to tell the narrative of our times about the restoration of land and culture than Wa’xaid (the good river), or Cecil Paul, a Xenaksiala elder who pursued both in his ancestral home, the Kitlope — now the largest protected unlogged temperate rainforest left on the planet. Paul’s cultural teachings are more relevant today than ever in the face of environmental threats, climate change and social unrest, while his personal stories of loss from residential schools, industrialization and theft of cultural property (the world-renowned Gps’golox pole) put a human face to the survivors of this particular brand of genocide.

Told in Cecil Paul’s singular, vernacular voice, Stories from the Magic Canoe spans a lifetime of experience, suffering and survival. This beautifully produced volume is in Cecil’s own words, as told to Briony Penn and other friends, and has been meticulously transcribed. Along with Penn’s forthcoming biography of Cecil Paul, Following the Good River (Fall 2019), Stories from the Magic Canoe provides a valuable documented history of a generation that continues to deal with the impacts of brutal colonization and environmental change at the hands of politicians, industrialists and those who willingly ignore the power of ancestral lands and traditional knowledge.

Cecil Paul, also known by his Xenaksiala name, Wa’xaid, was a respected elder, activist and orator, and one of the last fluent speakers of his people’s language. Cecil was born in 1931 in the Kitlope and raised on fishing, hunting, trapping and gathering. At the age of 10 he was torn from his family and placed in a residential school run by the United Church of Canada at Port Alberni, on Vancouver Island. For years, Cecil suffered from the pain of the abuse inflicted there. After three decades of prolonged alcohol abuse, he finally returned to the Kitlope and the positive influence of his people’s knowledge and ways. Once Cecil’s healing journey began, he eventually became an outspoken leader against the industrialization of his people’s land and traditional territory, working tirelessly to protect the Kitlope, the largest intact temperate rainforest watershed in the world. Cecil worked on two books with Briony Penn: Stories from the Magic Canoe of Wa’xaid and Following the Good River: The Life and Times of Wa'xaid. Cecil lived in his ancestors’ traditional territory and his work protecting the Kitlope continued throughout the final years of his life. Wa'xaid passed away at the age of 90 on December 3, 2020.

"The Magic Canoe is a story of resilience and resistance, as it details the struggles Paul has faced, struggles that are put in the larger history and context of settler colonialism."

“Required reading for all British Columbians. This powerfully told biography brings to life the teachings of Xenaksiala Elder Cecil Paul. In it, he tells the story of how he brought not only his community, but allies from all over the world together to save the Kitlope, the place of his birth and the largest contiguous old growth temperate rainforest on Earth. This book [Stories from the Magic Canoe of Wa’xaid] offers a glimpse of what reconciliation could look like from an Indigenous perspective.”

"[Stories from the Magic Canoe of Wa'xaid] is a valuable contribution to Indigenous history, in the vein of books like Tshaukuesh Elizabeth Penashue’s Nitinikiau Innusi: I Keep the Land Alive(2019) and Johnny Neyelle’s The Man Who Lived with a Giant (2019)."

"We can learn from Wa’xaid. It's a lesson for the work we have ahead. We can ill-afford exclusivity. Everyone who is willing to paddle must be welcome aboard the Magic Canoe."

"This book is a welcome read for those interested in the history of conservation in British Columbia, the practice of Indigenous memoir, and the specifics of colonial history in Canada."

"...we are invited in to these stories as if we are in his living room."

"To read the book is one kind of act of hope, because the book is so clearly a collaboration. Wa’xaid told his stories to others, including Briony Penn, a settler, who transcribed and extensively annotated them, and then they were published by Rocky Mountain Books, itself run by settlers. The hope is that Wa’xaid’s truths are amplified and not bent by the collaboration that publishing such a book in Canada requires. The hope is that Wa’xaid has in Penn and the publisher models of how other settlers might ally with Indigenous people making their case for ending colonization."

"It is the combination of two stories, the oral history and the archival history, that makes The Stories of the Magic Canoe of Wa’xaid a powerful model of Indigenous history."

"...the most important exploration, the passage of discovery we all need to take, isn’t to new lands. It’s the idea that the journey to understand ourselves and our place and purpose in the world, ends where it begins — at home. That’s where the Magic Canoe took Cecil Paul. And for all of us...it’s the idea that it’s never too late to join the Magic Canoe, no matter where it is in the world that you call home." - The Tyee

"This book is a small beautiful inspiration, containing photographs and endpaper maps, and with detailed endnotes by Briony Penn that set the story into cultural and historical context. If you teach Eden Robinson’s work, you should read this book." - Canadian Literature

"Paul’s reflections are candid and straightforward and offer new insights into environmental history and the daily grind and pleasure of activism."- Book Island

Other titles by Cecil Paul

as told by Briony Penn