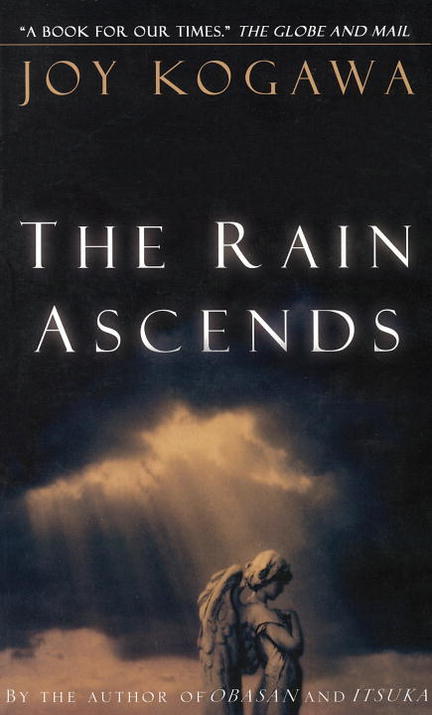 In Joy Kogawa's masterful third novel, a middle-aged woman discovers that her father, a respected Anglican priest, has long been a sexual abuser of boys. Originally published to critical acclaim in 1995, The Rain Ascends has been revisited by the author, with substantive additions to the end of the narrative that bring to fruition the heroine's struggle for forgiveness and redemption.

As a middle-aged mother, Millicent is confronted with the secrets of her father's past as she recalls certain events in her childhood-a childhood that, on the surface, was a blissful one. Disbelief turns to confusion as she faces up to the sins of her father and wrestles with a legacy of lies, silence and her own embattled conscience.

In The Rain Ascends, Joy Kogawa beautifully sifts the truth from the past and the sinner from the perceived saint. The result is a sensitive, poetic, yet searing depiction of the wounds left by abuse and the redemption brought by truth.

What Eleanor does not understand, what she refuses to understand, is that the truth is unspeakable. The truth is a knife that slays. That September night a year ago, when she called from Edmonton, she was as incoherent and hysterical as she had been the night before.

I could see her in one of her flouncy hippie skirts, standing in the hallway under the stairs of her rambling old house, her slightly masculine hand on her ample hips, her springy red hair more red than it used to be thanks to bottles of dye. Eleanor, my sister-in-law, was the bane of Mother's life, Mother's natural enemy, the thief who had stolen away in the night with her most precious possession, her son's heart. Eleanor thought to take one other son as well but that came later.

"My wife is clear about things, thank God," my brother Charlie says, "even if the rest of us aren't."

Eleanor is attached to us, grafted onto the family by marriage, but she is not "of" us. Her roots touch clearer water. When the wind blows, she bends. Her branches do not break. She pleaded with me as I sat there clutching the phone. "Talk to him," she said. "I can't. I just can't. It was such a long time ago. Why now? What do you want of us, Eleanor? What do you want?"

Father is so very old, I was thinking, as we argued on again about whether Eleanor should come down to Ragland to talk to him herself. Dear God, isn't love enough? Isn't it enough that he loves us? I know he does. And I do love him. I've always loved him. Hundreds and thousands of people have had their lives brightened by him. Father's magic was the way he created gift boxes of time by creating events. He gave us life. Sparkling life. "It's...it's just too unkind," I said finally. "He's so old. Can't we let him have some peace?"

"Peace!" Eleanor fairly shouted. "Oh yes! Peace! I'm all for it. How on earth can there be peace if we don't deal with this? Now! Before it's too late! It's not just for him, Mills. I know I need answers. I need the truth, for God's sake. Let's have some truth!"

"It's love," I said hesitantly, "I think it's love that's more important."
"You're wrong," she said. "Love without truth isn't love."
"I know they belong together, love and truth, but..."
"Precisely," Eleanor interrupted. "They belong together. The thing is, you deny dignity when you deny responsibility. That's not love, Millicent. It's cowardice. He's not an idiot. He shouldn't be treated like one. He should know what he is. He's a criminal. A criminal!"
"Would you be happier if he was in prison? Who sends old men off to the front lines?"
"What front lines? I'm talking about responsibility. His. Yours too. And mine."
"Your responsibility? What responsibility could you possibly have?"

She was silent for so long that I thought the phone might have disconnected. Then her voice sounded choked as if she were trying not to cry. "Millie, God help us,if there's just one thing that history teaches us, just one thing, it's that bystanders and perpetrators are both on the same side."

It was my turn to say nothing as I held the receiver against my ear and sat rocking on my chair. God help us indeed, guilty bystanders that we all are, afraid to act, confused by the corruptions into which we are born. When it comes to Father, there's no denying whose side I was on at the time. If I was guilty of a crime, it was my heart that was indicted.

"I've tried to talk to him, Eleanor. I've really tried. But it's too late. It's just too late in the day."
"It's never too late," Eleanor said. "Truth is never too late for anyone."
"What on earth do we mean by truth? We can't possibly know what it means. It's like the sun shining on the other side of the world. It's beyond us."

"Then we have to walk to the other side of the world. That's what we have to do. Think of it as a quest for fire, Mills. You're the one right there. You're the closest person in his life. God knows he won't tell me anything."
"He won't tell me either."
"Yes he will. You've always been there for him. Oh God, you've been like, like Hitler's cat, if Hitler had a cat."
"Oh how absurd. Father is not Hitler."
"But all you do is mewl about love. Face the truth, for once, woman!"

I had not pictured myself as Hitler's cat, but if that was the way she saw me, if that was the way I was to be seen, then so be it, I thought. On the great judgement day, Hitler's cat can stand in front of that awesome cloud of witnesses and yowl its unacceptable tale of affection. Then all the people will scream and gnash their teeth as they cast it forth into eternal damnation along with the monster.

Eleanor can not know how much I loved Father, how much I have always loved him, in spite of every, every thing, in spite of everything. I am his one and only, loyal, devoted daughter. A friend, they say, is someone who helps you hide the body. But Eleanor, my brother's strong-minded wife, was telling me to exhume the skeleton garbed in the robes of a priest, a skeleton busily hiding other small skeletons between the walls.

"God knows how many victims there were," Eleanor said. "Just stop for once in your life and think about them. The families. Consider the victims, for heaven's sake."

She was asking me to hear the wailing in the night, to consider the suffering I did not see, to consider another point of view. My reply was that these considerations were not my province. I was his child, his well-fed cat if you will, and I was witness for the defence. I was retained, before I was born, to be his advocate.

In the late-night courtroom of my thoughts, I heard her arguing that my mothering, surrounding, defending love was misplaced, and that I more properly belonged with the weak. But as I took my stand beside my father, beside and around, I declared that I knew of no criminal who was not also weak, not also a victim. It was only the mob of accusers who were invulnerable.

I tried to give her my perspective, a view from a lowly place beside a bowl of milk and a plate of table scraps. I told her I would leave it to his accusers to chronicle his crimes.

"You're wrong!" cried Eleanor's angry voice, her three a.m. telephone weeping voice. "Face the rage, Millie. Let it out before it eats you alive. For God's sake, let it out!"
"To whom, Eleanor? Let it out to whom?"
"To the bishop. Tell him. Write to him."
"But he's our friend! How could I possibly?" She could more reasonably have suggested I take off my clothes and run naked down the noonday street.
"Tell me, then. At least find out what the extent of it is."

So said Eleanor in the late night, but from within the fog I could think only that I had pledged my loyalty to my beloved father. In my lifetime of knowing him I had experienced such tenderness, such wisdom and kindness and forbearance, such gentle forgivingness and largeness of heart, that I was able, even with all that I knew, to utter the word Father, and to understand it as a metaphor for God. Father, God. Our Father, which art in heaven, hallowed be Thy Name.

Eleanor accuses me of constantly choosing the darkness. "You may be right," I said. "But people, so many people, see him as the soul of saintliness." Last Sunday in church, one woman remarked on his "spiritual aura" and said, "I've rarely seen that certain quality. He's so gentle. I feel closer here with him to that spiritual centre than anywhere else I have ever been." People say these things and I do not doubt their sincerity. I do not. My father, Eleanor, my father, dear people of the jury, is known to be a good man. And so help me, God, this is also true.

But Eleanor, who knows better, who knows worse, chants her mantra in my midnight ear: The truth, the truth, the hidden truth. Take the sword of truth and cut the knots. Then you'll be free.

The knots are in my bowels, Eleanor. A sword in the bowels is not usually there to make one free.

People go mad in these circumstances. Their minds unravel. As she drags me into the courtroom to take my stand, when I raise my hand and swear to tell the truth, the whole truth and nothing but the truth, I am stating what cannot be done. Yet she persists, my dear sister-in-law, she who is judge, jury and prosecutor, passionate for justice and health. The crime must be uncovered and the prisoner brought forth in his chains. This is required. Vindication for the victims. Vengeance even.

This material is intended for personal reading only, not to be distributed in print or via email. Thank you for your consideration.