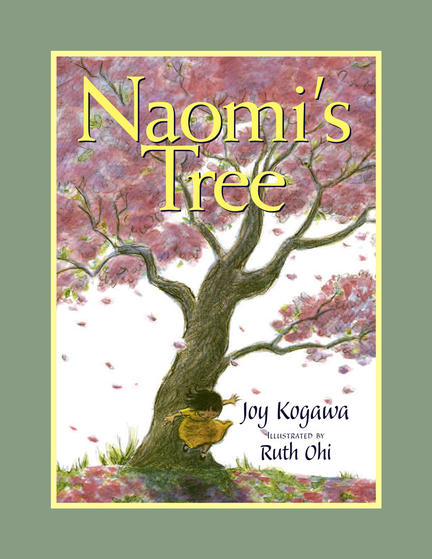 On the Guelph Mercury's 10 best Children's Books of 2008 list

A young couple leaves Japan for the coast of Canada, bringing a cherry seed to plant in their new garden. During the years that follow, the little cherry tree watches over the family as the couple have children, and then grandchildren. Young Naomi makes the cherry tree her special friend, and the tree's branches shelter her as she plays. But one day, war breaks out between the two countries, and the family is sent to an internment camp away from the coast. And though Naomi often dreams of going home, the dream fades as the years go by. The little tree is left behind to mourn its loss.

For many years the cherry tree sends out a song of love and peace that reaches Naomi only in her dreams. But the insects and small animals hear the song, and on the wind they send back their own messages to the tree, assuring it that Naomi is safe and that one day she will return. And when she does, the tree will be waiting for her.

Based on the World War II story of Naomi and Stephen in Naomi's Road, Naomi's Tree is a poetic story about enduring love and its almost mystical power to heal the spirit.

"The book's text and illustrations contain both beauty and grace.

"This is a beautiful testament to friendship, and the healing power of nature. Combined with Ohi's lush pencil and watercolour illustrations - especially those of the tree in bloom - Naomi's Tree is a solid pick for all school-age picture book collections."
-- Resource Links

"Ohi outdoes herself with her compelling artworks. Just as our own backyard cherry trees are now setting their fruit, with harvest in perhaps a month, reading the tale of Naomi's tree is also a fruitful journey. It begins sweetly, turns sour, and is ultimately as sweet as can be."
-- The Hamilton Spectator

"Kogawa's story is really about the power of love and how time can bring about reconciliation and new hope. Ruth Ohi's artwork in coloured pencil is suitably sensitive and delicate."
-- Winnipeg Free Press

Review of Naomi's Tree and Naomi's Road
"The story of Naomi as told in these two books is a great way to introduce children to the history of Japanese Canadians. Both books are illustrated with delicately wrought images by Ruth Ohi. Naomi's Tree, in particular, carries the motif of the cherry tree and blossoms throughout the story in a subtle but reinforcing manner. Both books symbolically contain images of the older Naomi encountering the cherry tree late in her life. Fraught and difficult as life was for Naomi, she is given great strength and courage in the gifts of love she receives from her family despite the absence of her mother. She learns to battle the inherent racism of the time with patience and understanding."
-- PaperTigers.org

Japanese newlyweds immigrate to Canada, bringing a cherry seed to plant in their new garden. But one day, war breaks out between Canada and Japan, and the family is sent away. Now what will become of their beloved home and the tree that longs for their return?