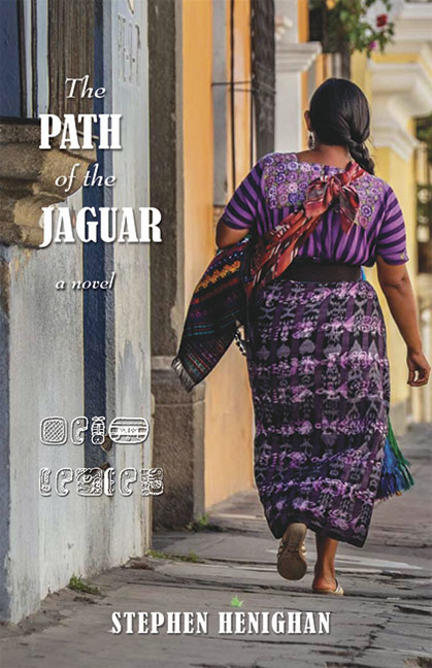 As The Path of the Jaguar opens in 1997, Guatemala is emerging from thirty-six years of civil war. Amparo Ajuix, a determined young married woman who lives in a Mayan village with her non-Mayan Guatemalan husband, is optimistic about the future. She is pregnant with her second child. With the help of an American NGO, she runs a savings club for the women in her village with the goal of being able to offer micro-credit loans. Eager to take advantage of Guatemala’s new democracy to strengthen the culture of the Mayan people, she campaigns to switch the language of instruction in the village’s primary school from Spanish to the local Mayan language of Cakchiquel.

But Amparo’s life is wracked with tensions. Dona María, an older woman who is a powerful figure in the village market where Amparo sells her handicrafts, is jealous of Amparo’s savings club. Amparo’s best friend, Raquel, is a born-again Protestant who disdains Amparo’s devout Catholicism. The youngest of Amparo’s nine siblings, Yolanda, a pretty seventeen-year-old girl, flirts with foreign men in the nearby tourist town of Antigua. Most seriously of all, Amparo’s husband, Eusebio, suspects that he is not the father of Amparo’s second child. Even though his suspicions are groundless, the erosion of complicity between them poisons their marriage.

The second part of the novel opens in 2003. Amparo is working as a teacher in a language school for tourists in Antigua. Most of the students are Americans who want to learn Spanish, but the school’s owner phones Amparo with a special request: a man who manages programs for foreign students in Guatemala wishes to study her native Cakchiquel Mayan language. The experience of teaching this man, whom she calls Ricardo, confronts her with the in-between nature of her own culture: she does not speak Cakchiquel perfectly, as her parents do, yet as a Native person she cannot be completely accepted into Spanish-speaking Guatemalan society; her Catholicism is mixed with beliefs in traditional Mayan gods. Her crisis about what to preserve and what to discard from her culture is accentuated when her son, Pablito, a sickly, enigmatic boy whom she struggles to understand, falls ill.

Excerpt: The Path of the Jaguar (by (author) Stephen Henighan)

Mist condensed around her head. She felt the child’s twisting far down in her entrails as though it were marooned in a place beyond her reach. The Maker, the Modeller, Sovereign Plumed Serpent, wrought the world out of mist. Her mind strayed through the spaces beyond that haze when the mountains rose out of the water and the first people were fashioned out of corn and took the name Jaguar. Her child was slipping away from her. Before she could reach through that space to pull the child back into the light which, inhabited by the first mother and the first father, would yield life, her strength abandoned her. As she floated on the waves that must recede before people of corn could take to the earth, a sharp smell penetrated her nostrils. Pom. Someone was burning incense. She heard voices: Eusebio’s words derogatory, Mama’s tones implacable in resistance. Amparo tried to reach out to them. She slipped away into the silence of the mist. She saw the people of mud who had preceded those of corn, deity’s failed experiment in human life. The mud people’s noses and eyebrows crumbled. People of wood, the heart of the sky’s second failed experiment, who could not speak or worship their makers, stared without seeing her. As the people of wood drowned in the great flood, she slid farther down into darkness. The tendrils of incense prickling her nostrils were the lone thread leading back to the world. She saw four roads of different colours crossing. Cold fear that she was already a corpse and this was Xibalbá, and the four crossing roads were the gate to the underworld. A chanting tapped through the walled-up silence. Nothing moved. She was blind, the cold rivetting her to the meeting point of the four coloured roads. The first four men, Jaguar Quitze, Jaguar Night, Jaguar Not Right Now and Dark Jaguar, fathers of all subsequent lineages, hung before her eyes, then faded away. The tapping mingled with the tang of incense. The two sensations blended until they were a single interwoven fabric like the rope of terror that runs up a woman’s spine when she fears for her child –yes, she had a child, and another one inside her– and in that instant her body swathed her in its aching weight and she was back in her room listening to the sound of the curandera chanting. The child turned in her belly, moving her body with its body, two bodies moving as one, as she and her husband had moved as one to make the child. The curandera must be Doña María’s sister Eduviges, a woman simpler yet wiser than her sibling.

Eduviges stepped back from the side of the bed. Mama began to sing the song she sang when they were ill as children. She had sung these words over the beds of the children who had died in infancy, and over those who had returned from illness. Her voice was harsh but strong:

Stop here for our food is good

Amparo, feeling the bulk of her hair beneath her on the pillow, murmured: “It’s all right. I’m here.”

“You’ve been away for two days.”

At Mama’s words, she remembered the man with the gun, the other thief’s dragging gait. She lifted her hand, felt the bruise on her temple and began to cry.

She passed from sleep to waking without lapsing into the mist. Every time she woke she felt sad. Eusebio entered the room and held her hand. Esperanza visited her and said: “In the next meeting we’ll start saving again. I’ve spoken to the señora gringa and she says we cannot allow misfortunes to discourage us. The only solution is to start again.”

The señora gringa had spoken to Esperanza, not to her. Her powers were ebbing. She had lost everyone’s respect. Her child would be the offspring of rumour.