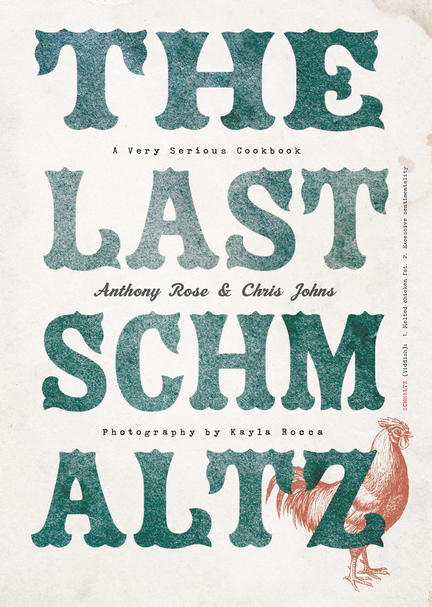 SCHMALTZ (Yiddish): 1) melted chicken fat. 2) Excessive sentimentality; overly emotional behavior. From one of Toronto's most magnetic chefs and restaurateurs comes a long-awaited cookbook that has just the right amount of schmaltz.

Whether you know him as Toronto's King of Comfort Food, the Don of Dupont, or the Sultan of Smoked Meat, a conversation about the food and restaurant scene in Toronto isn't complete without mention of Anthony Rose. From his famous Fat Pasha Cauliflower (which may or may not have caused the Great Cauliflower Shortage of 2016) and Rose and Sons Patty Melt to his Pork Belly Fried Rice and Nutella Babka Bread Pudding, Anthony's dishes have consistently made waves in the culinary community. Now, in his first cookbook, Anthony has teamed up with internationally-renowned food and travel writer Chris Johns to share his most famous recipes and stories.

Be amazed by the reactions Anthony received when he ingeniously invented a dish called the "All-Day Breakfast." Thrill at the wonder Anthony felt when, as a young Jewish kid, he tasted the illicit lusciousness of bacon for the first time. Or discover the secret ingredient to the perfect shore lunch on a camping trip (hint: it's foie gras).

Often funny, sometimes ridiculous, but always delicious, The Last Schmaltz is a peek into the mind of a much-loved chef at the top of his culinary game.

DEREK DAMMANN was born in Campbell River, B.C., the salmon capital of the world. After studying cooking in Nanaimo, chef Dammann worked in one of Canada’s great Italian restaurants, Zambri’s, in Victoria, before making his way to the UK to work with Jamie Oliver in developing the concept behind the restaurant 15, and later becoming the corporate chef of Sweet Candy, Jamie’s private production company. He came back to Canada and settled in Montreal where he opened DNA, one of the most exciting nose-to-tail dining establishments in North America. He partnered with Jamie Oliver again to open Maison Publique, a hugely popular and highly regarded gastro-pub.

CHRIS JOHNS is one of Canada’s most respected food writers. He spent his early years in the Northwest Territories before moving south and eventually finding his way to Toronto. He has written extensively for en Route, The Globe and Mail, Wallpaper, Toronto Life and various international publications. His work has been translated into three languages and has appeared in the Best Food Writing compilation.

TWO COOKS PARADE A WHOLE ROASTED PIG through the dining room as though it’s an old-timey duchess being transported to her rendezvous in a grand sedan chair. It’s a scene that happens quite a bit when you hang out with Anthony, actually, and it never gets old.

The timelessness of the moment, a Renaissance painting come to life, is only enhanced by the smell of woodsmoke from the massive grill, the sound of a guitar being strummed, and the abundance of animal hides strewn across therough-hewn benches.

We’re at Big Crow, the backyard barbecue joint set discreetly behind Rose and Sons. It’s Anthony’s most elemental and, in some ways, his most loved restaurant. It was also never supposed to happen.

“When we took over People’s Foods, there were still tenants living in the house upstairs,” Anthony recalls. “As they moved out we took over. The backyard where Big Crow is now was just a backyard. It was never meant to be its own restaurant, but operating a 28-seat diner is insane, so we wanted to find a way to bring more people in.”

At first, the idea was just to cook the food in Rose and Sons and move it to the backyard, but Anthony and his team quickly realized that the distance was too far and too awkward, so they moved a little grill out back to cook off of. From there, it snowballed.

The idea of creating a Southern barbecue joint was floated briefly, but Anthony had been burnt by that particular genre once before. “It’s harsh out there for a barbecue joint,” he says. “Purists are so judgy. Even when I opened Drake BBQ, which was just pulled pork and brisket, I heard the same two things: ‘Oh, they don’t serve chopped brisket in Texas’ and ‘This sauce isn’t how it’s supposed to be.’ Barbecue people are tough.”

As Big Crow’s simple wooden walls went up and the shipping container that would serve as the bar and prep kitchen was settled into place, the space took on a kind of Quebec sugar shack meets Ontario cottage vibe. Being in a backyard automatically brought up memories of being in the country and cooking outside. Clearly, the evocation of barbecue was not going away, so Anthony decided to simply draw inspiration from Canadian backyard barbecues, a style with fewer rigid rules and more room to include all kinds of traditions.

With the concept in place, the cooks were free to play with ideas; everything from peameal bacon subs and chopped brisket nachos to Cornish hens brined in pickle juice and smoked ox tongue. Even whole hogs roasted in a La Caja China, a Chinese/Cuban contraption that cooks a pig in a box beneath a pile of coals. That same China Box, as they’re known, is where tonight’s epic beast comes from. The tawny, 80-pound hog is the centerpiece for a meal Anthony is hosting for the crew behind the Boots and Hearts Music Festival.

“Of all the music events we’ve catered over the years—WayHome, Field Trip, NXNE—Boots and Hearts was always my favorite,” Anthony says. “Nobody loves music like country-music fans.”

On a big table just outside the dining room, there are a whole bed’s worth of oysters, lined up waiting to be shucked: sweet Beausoleils from New Brunswick; plump, firm French Hooters from PEI; rich Tatamagouches from Nova Scotia.

“This is my first,” announces Mark, a bulky stagehand who is about to pop his oyster cherry. He tilts the shell back, winces, and immediately chases thebivalve with a slug of beer. “How was it?” I ask. “Not bad,” he says through watering eyes. Cold, saline, and with a cucumber sweetness, they taste much better than “not bad” to me.

I polish off a few more and head inside just in time to hear Stan Dunford, the legendary venture capitalist, transportation executive, and founder of Bootsand Hearts, introduce tonight’s performer, a musician named Jesse Gold whom Stan discovered as part of the festival’s emerging artist showcase series. Decked out head to toe in black and looking a bit like a hip, bearded Hank Williams, Jesse launches into an impressive acoustic set, just a singer and aguitar, of blue-eyed country soul.

A table of fans sway to the music and sing along with every word, positioning themselves to make sure Jesse is framed in the background of their peace-sign flashing selfies.

After the final chord is strummed and the applause dies down, it’s time to eat. The cooks—Anthony included—have been busily reducing the hog to a pileof shreds and shards of crisp skin. As the plates start to arrive, people squeeze together along the long rows of benches to make room for their friends and slather gamey whipped duck fat over slices of dark, heavy bread. Crisp tortillas are dragged through creamy guacamole. Even the salad gets a turn on the grill, imbuing the romaine and treviso with a dose of smoke. Meat plates arrive, pulled pork, of course, but also thick sausage links and caramelized chicken, and with them more flavor in the form of squeeze bottles full of sauce: earthy and rich chopped mushroom salsa, grilled wild leek relish made with leeks from around Anthony’s cottage, and jalapeño cream.

In the midst of the feasting, I catch a glimpse of Anthony standing alone in aquiet corner, surveying the scene. Wiping the pork fat off my face, I excusemyself and walk over. “Happy with the party?” I ask.

“Totally,” he says. “You know, what I love about this place is that it kind ofjust came into its own. We didn’t want to push anything on the restaurant. Wewanted it to evolve into what it wanted to be. You can’t create culture.”

“We could praise Anthony endlessly; he’s a very sharp cook with quite an eye for design, a refreshing and humorous wit in this era of tasting menus and solemn plating, but in the end, he cooks food that’s really, really delicious and has never forgotten that a restaurant is first and foremost a place for eaters to enjoy eating! This book is a straight-up portrait of the food, the restaurants and the people that make this small empire of lox and schmaltz so special.” —Fred Morin and Dave McMillan, bestselling authors of The Art of Living According to Joe Beef
“I often joke (but it’s actually true) that I have known Anthony since he was born and have always loved his food.  He has a true gift for blending his love of family with his impeccable culinary training to create crazy delicious meals in fun, welcoming settings. Along the way he has changed the restaurant culture in this country. The Last Schmaltz is the perfect introduction to the mouth-watering world of Anthony Rose.” —Bonnie Stern, bestselling author of Friday Night Dinners

“Beyond sharing his successful restaurant dishes and the occasional cocktail, Anthony Rose serves up instructions for party fare and for foods to take camping or to the cottage, and does an extended riff on ‘le hamburger.’ All this in a casual, bad-boy, joking style that tells us to let go and have fun, rather than worrying about the details.” —Naomi Duguid, award-winning author of Taste of Persia

“The Last Schmaltz showcases Tony’s love for food, people, and life. The warm, casual style portrayed in all his restaurants creates the ultimate cross-cultural comfort food recipes with intense flavor. Whether you start with the slow roasted cauliflower with halloumi, tahini and pomegranate seeds; a cheesy patty melt; or Fat Pasha Hummus, you will soon have a dog-eared copy of this book as you can’t help but make every recipe. And if anyone can bring back herring, Tony will with his passion and pulpit for great food.” —Emily Luchetti, chief pastry officer and author of The Fearless Baker
“[From] one of Toronto’s best-known chefs and restaurateurs  . . . a cookbook that has just the right amount of [schmaltz].” —The Globe and Mail

Other titles by Chris Johns

Dad in the Kitchen

A Taste of Prince Edward County

A Guide to the People, Places & Food of Ontario's Favourite Getaway