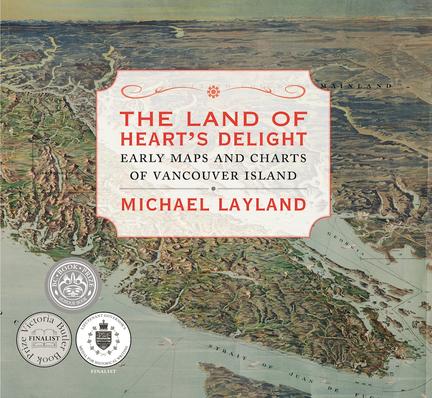 Just how, and why, did Vancouver Island get onto the map? How was knowledge of our immediate geography acquired and recorded? With 130 maps, dating between 1593 and 1915, this cartographic history tells the story of how Vancouver Island and the surrounding area came to be mapped. The book shows local cartographic milestones, marking progress in our knowledge through the island’s rich—although comparatively short—recorded history. However, the maps, by themselves and without context, cannot tell the whole story. The accompanying text reveals the motives, constraints, agendas, and intrigues that underpin their making.

The narrative, roughly chronological, begins before the arrival of Europeans and concludes at the outset of the First World War and includes an introduction on the history and significance of map-making, as well as an afterword summarizing subsequent cartographic developments. Also included are an index, endnotes, a list of cartographic sources, and a glossary.

Michael Layland was born and educated in England and trained as an officer and map-maker in the Royal Engineers. He serves as the current president of the Friends of the BC Archives, is a former president of the Victoria Historical Society, and is on the committee of the Historical Map Society of BC. He is also a member of the Society for the History of Discoveries and the International Map Collectors’ Society. His articles on explorers and exploration history have appeared in international encyclopedias, including eight entries in the two-volume The Oxford Companion to World Exploration. He also reviews books for British Columbia History magazine. Michael has lived in British Columbia for some thirty years, for the last twenty in Victoria. Please visit his website at baytextmaps.com.

"[A] meticulously researched and lavishly illustrated book." —The Coastal Spectator

Michael Layland joined Annette Lucas on Go! Island to speak about his love of maps, his passion for history, and what inspired his new book, The Land of Heart's Delight: Early Maps and Charts of Vancouver Island.

The Land of Heart's Delight shortlisted for the BC Book Prize Bill Duthie Booksellers Award.

The Land of Heart's Delight awarded second place for The Lieutenant Governor's Medal for Historical Writing by the BC Historical Federation.

"The Land of Heart's Delight is filled with dozens of details that help provide a better sense of where we live . . . It's next to impossible to understand our history without first understanding our geography, and maps hold the key to that knowledge." —The Times Colonist

The Land of Heart's Delight shortlisted for the City of Victoria Butler Book Prize.

"In his foreword, Derek Hayes describes Layland as the foremost map historian of Vancouver Island. Any reader who encounters the sophisticated concision of Layland's commentary will be hard pressed to imagine otherwise. We get the comfortable feeling that Layland might like maps more than he likes people." —BC BookWorld

Other titles by Michael Layland