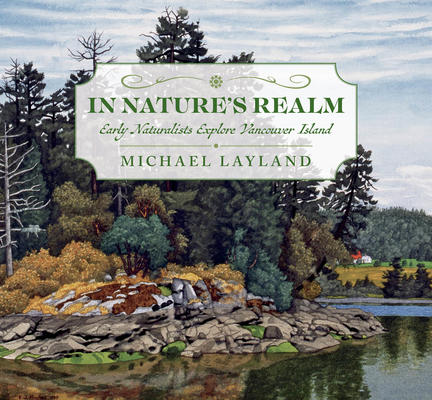 A celebration of the richly diverse flora and fauna of Vancouver Island as explored through the records of explorers, settlers, and visitors, and with due respect to the wealth of Indigenous traditional knowledge of the island’s ecosystems.

Many, such as Archibald Menzies, accompanied English and Spanish explorations investigating the coastal geography for colonial expansion. Doctor–naturalists such as John Scouler, David Douglas, and Robert Brown worked with the Hudson’s Bay Company and collected specimens. Irish-born John Macoun, a renowned naturalist, brought his expertise to Vancouver Island, as did botanical artists Sarah Lindley (Lady Crease) and Emily Henrietta Woods.

In Nature’s Realm is a companion volume to Layland’s two previous titles: A Perfect Eden: Encounters by Early Explorers of Vancouver Island, shortlisted for a BC Book Prize in two categories; and The Land of Heart's Delight: Early Maps and Charts of Vancouver Island, shortlisted for the Bill Duthie Booksellers’ Choice Prize, and for the City of Victoria Butler Book Prize.

Michael Layland was born and educated in England and trained as an officer and map-maker in the Royal Engineers. He serves as the current president of the Friends of the BC Archives, is a former president of the Victoria Historical Society, and is on the committee of the Historical Map Society of BC. He is also a member of the Society for the History of Discoveries and the International Map Collectors’ Society. His articles on explorers and exploration history have appeared in international encyclopedias, including eight entries in the two-volume The Oxford Companion to World Exploration. He also reviews books for British Columbia History magazine. Michael has lived in British Columbia for some thirty years, for the last twenty in Victoria. Please visit his website at baytextmaps.com.

"It is difficult to convey the excellence of this book. The 150 illustrations (sketches, woodcuts, paintings, photos) alone make it a treasure . . . a top-notch book and one I highly recommend." —BC History

"Leaving no stone unturned cartographer Layland has brought to life a cast of characters a mile long and each one a little masterpiece of story telling." —BC Nature

"Michael Layland has done it again . . . In his new book he has prepared a major study of the early naturalists who explored Vancouver Island. To say this fills a gap in our knowledge is an understatement . . . we have had nothing like it. Now, though, we have a large, comprehensive work, that covers many people and topics. For some of us it opens up a whole new area of study. . . . This will be a standard reference text on Vancouver Island for years to come." —Stephen Ruttan, The Log, Friends of Ecological Reserves Newsletter

"There is never a dull moment in this beautiful and thoroughly enjoyable book. It will appeal to Indigenous elders, armchair adventurers, Island hikers and coastal sailors, student, amateur and professional historians, artists, botanists and photographers, museum and art gallery curators—and everyone who appreciates a well-written and gorgeously illustrated book." —BC BookWorld

"This is a book of history rather than "natural history." While Layland's subjects focus on wildlife, he focuses on them. . . On the dust jacket of In Nature's Realm [Layland] presents as an "amateur naturalist"; amateur here must be interpreted in its full sense as one who pursues an interest purely for the love of it. That is how we should approach these books — for the love of it — for the love of history as continuing connecting narrative full of chance encounters and surprising recognitions, for the love of maps and hummingbirds, of obsessive personalities and true adventures on land and sea, probably also for the love of place." —Dorchester Review

"Large and brimming with information on British Columbia’s coastal past and horticultural endeavours, as well as being stunningly designed and illustrated – it’s like a coffee-table book, but with a vast amount of beautifully presented knowledge on both flora and fauna and historical discovery." —Times Colonist

"An artistic and literary achievement. . ." —BC Studies

Other titles by Michael Layland

The Land of Heart's Delight