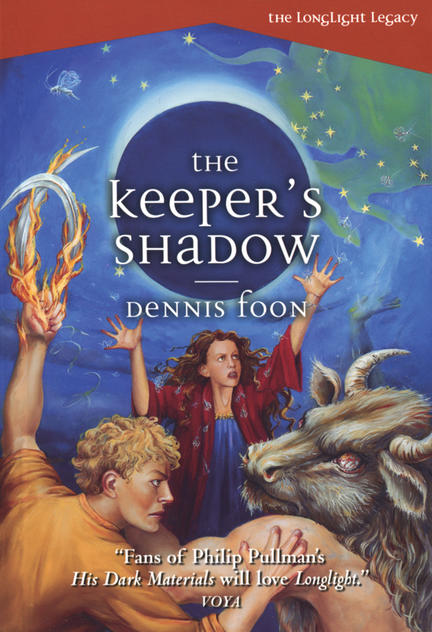 Two years have passed since Roan fled the destruction of his village. He has survived the polluted wilds of the Devastation, escaped the lethal mind traps of the Dreamfield, and infiltrated the heart of the sinister City. Through it all, Roan has struggled to hold fast to Longlight’s legacy of peace. But now, an unimaginable evil looms and violence seems unavoidable.

Darius, the Keeper of the City, is enraged by the escape of Roan’s sister Stowe. Despite the loss of his sacrificial prodigy, Darius’s malevolent reign continues to push the entire realm to the brink of destruction. As Roan and his trusted friend Lumpy struggle to unite disparate peoples in a war against the City, it becomes clear that any chance of victory must include Stowe. But is her battered psyche damaged beyond all hope?

The Keeper’s Shadow completes the engrossing saga of The Longlight Legacy, a powerful chronicle of how untold destruction can result from accommodating evil and the violence it spawns.

“... a significant work of ... speculative fiction ... that should be included in any serious collection of such books. A thought-provoking series, it has the potential to stimulate discussion on a wide range of ethical issues.”—Resource Links, 02/07

“... the complex and multilayered story will satisfy Longlight fans. Foon creates a strong trilogy that will entice thoughtful readers ...”—VOYA, 02/07

“The three books communicate many important messages about the human condition including the importance of believing in oneself, of working together and sometimes sacrificing oneself for the greater good, of valuing friendships and allegiances, and of accepting responsibility for the consequences of our actions. Recommended.”—CM Reviews, 10/06

The Keeper’s Shadow (The Longlight Legacy)

The Keeper’s Shadow concludes Dennis Foon’s imaginative Longlight Legacy trilogy and fans will not be disappointed with Roan’s continued quest for self-understanding nor with the plot’s dramatic twists and turns. In this volume, Roan locates the journal of his great grandfather, Roan of the Parting, which details the young man’s destiny as the hero of the lost people of Longlight. The ultimate battle between Roan’s uneasy alliance and the destructive forces of the City and its keeper, Darius, is the finale to this fast-paced and action-packed tale.

Many favourite characters return in these pages, including Roan’s sister Stowe, and his dear friend and fellow traveler, Lumpy. The reader learns more about the descendants of the original four rebel armies as well as the fantastical creatures such as the Wayza and Hhroxhi. Foon’s fictional societies uphold their beliefs in the power of storytelling, their quest for knowledge as a power for good and their hope for a peaceful future through the innocence of their children.

It is unlikely that readers will attempt this volume without having read the first two, however a warning to all. Some younger readers may be disturbed by the details of the final battle or the details of the exorcism of two central characters who have been possessed be evil entities. Fans of J.K. Rowling’s Harry Potter and J.R.R. Tolkein’s Lord of the Rings series will enjoy the Longlight Legacy trilogy as well.

The Keeper’s Shadow (The Longlight Legacy)

Two years have passed since Roan fled his village. But now, evil looms and violence seems unavoidable. In Volume 3, his journey through a wasted world comes to a dramatic conclusion.