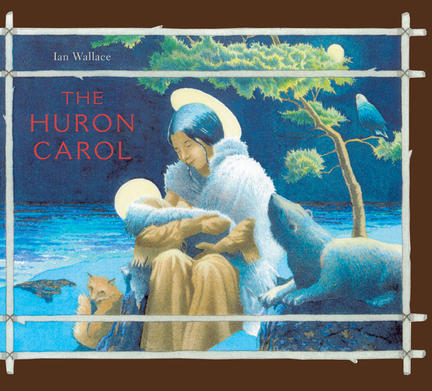 The Huron Carol is a beautiful and unusual Christmas song with a rich history.

In the early 1600s, Father Jean de Brebeuf came to Canada from his native France as a Jesuit missionary. He settled among the Huron, or Ouendat, people near what is now Midland, Ontario. Despite his missionary zeal, Brebeuf was sensitive to the people with whom he lived. He learned their language and he wrote, in Huron, the original version of this famous Christmas carol.

Brebeuf's carol continued to be sung by successive generations of Hurons. Then in 1926, Toronto writer Jesse Edgar Middleton, inspired by Brebeuf, wrote his own version of the carol in English. His are the familiar words we sing today, describing the Huron landscape, flora and fauna in telling the Christmas story.

Illustrations in this version evoke the richness of the native landscape.

In the well-composed watercolour paintings, the many night scenes gradually give way to a radiant day. A beautiful, moving interpretation.

ÖIan Wallace, drawing on our imaginings of how that special night might have looked, puts it all down so well on paper.

The elegant watercolor landscapes...blend the Huron culture and the Christmas carol perfectly.

Jean de Brebeuf’s carol was originally written in Huron in the early 1600s. That version and its history and the history of its writers (the English version was written by Jesse Edgar Middleton in 1926) are included in this edition, illustrated by Ian Wallace. Music and French lyrics are also incorporated. Wallace’s respectful watercolours depict Jesus as a Huron baby born in a longhouse. Animals surrounding the new babe are a bald eagle, a hare, wolves and a snowy owl. The three kings are Aboriginal chiefs who offer gifts. They are accompanied by other uniquely Canadian animals such as the moose, fox, lynx and bear that appear in the many wilderness scenes. The Aboriginal angel choirs are painted in blues and greys with more colours appearing as the sun rises and others come to visit the “radiant boy.”