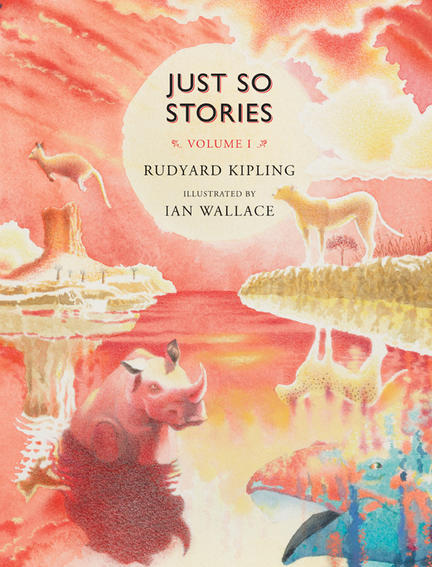 Rudyard Kipling's Just So Stories is one of the best-loved story collections ever written for children. Now Ian Wallace, one of Canada's most accomplished children's book illustrators, reinterprets the famous tales with his vibrant art, bringing Kipling to a whole new generation of young readers.

Kipling wrote the stories for his young daughter, who would only sleep if they were told “just so.” The first edition was published in Great Britain in 1902, along with black-and-white illustrations by the author himself. The stories have remained in print ever since, delighting young readers all over the world. Many of the tales are origin stories, explaining how an animal came to be the way it is. They are ripe with imagination, inventive vocabulary and word play. This new edition, published more than 110 years after the original, has been edited to remove any racist language. The first handsome volume includes “How the Whale Got His Throat,” “How the Camel Got His Hump,” “How the Rhinoceros Got His Skin,” “How the Leopard Got His Spots,” “The Elephant's Child” and “The Sing-Song of Old Man Kangaroo.” The second volume will be published in spring 2014.

Inspired by these remarkable stories from all around the world, Ian Wallace has chosen to make an annual donation to IBBY's Fund for Children in Crisis.

Rudyard Kipling (1865–1936) was an author of books for children and adults who achieved wide critical acclaim in his lifetime. Born in India, he was sent to school in England, where he endured difficult years with a foster family but discovered a love for reading. When he was seventeen he returned to India for a time, where he worked as a journalist before turning to poetry, short stories — for which he is best known — and novels. The Jungle Book became an instant classic and was followed by other much-loved children’s books, including Kim and Just So Stories. Kipling’s many awards include the Gold Medal of the Royal Society of Literature and the Nobel Prize in Literature.

Wallace invests each scene, including the humorous ones, with poetic gravitas...An elegant, timeless treatment for all those best beloved.

[T]imeless tales, freshly interpreted through superb mixed-media paintings . . . [that] embrace the nuances of each tale and add to their sense of wonder.

Other titles by Rudyard Kipling