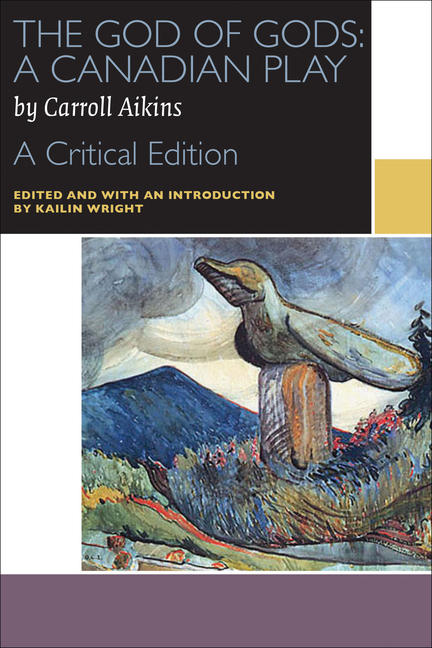 Carroll Aikins’s play The God of Gods (1919) has been out of print since its first and only edition in 1927. This critical edition not only revives the work for readers and scholars alike, it also provides historical context for Aikins’s often overlooked contributions to theatre in the 1920s and presents research on the different staging techniques in the play’s productions.

Much of the play’s historical significance lies in Aikins’s vital role in Canadian theatre, as director of the Home Theatre in British Columbia (1920–22) and artistic director of Toronto’s Hart House Theatre (1927–29). Wright reveals The God of Gods as a modernist Canadian work with overt influences from European and American modernisms. Aikins’s work has been compared to European modernists Gordon Craig, Adolphe Appia, and Jacques Copeau. Importantly, he was also intimately connected with modernist Canadian artists and the Group of Seven (who painted the scenery for Hart House Theatre).

The God of Gods contributes to current studies of theatrical modernism by exposing the primitivist aesthetics and theosophical beliefs promoted by some of Canada’s art circles at the turn of the twentieth century. Whereas Aikins is clearly progressive in his political critique of materialism and organized religion, he presents a conservative dramatization of the noble savage as hero. The critical introduction examines how The God of Gods engages with Nietzschean and theosophical philosophies in order to dramatize an Aboriginal lover-artist figure that critiques religious idols, materialism, and violence. Ultimately, The God of Gods offers a look into how English and Canadian theatre audiences responded to primitivism, theatrical modernism, and theosophical tenets during the 1920s.

Wright’s scholarly introduction is extensive, insightful, and meticulously detailed, reading the play in the contexts of, for example, primitivism, modernism, and theosophy. The script is also complemented by explanatory and textual notes and primary material such as production shots, reproductions of playbills, reviews, and the like.

Illuminating history, an excellent gloss, provocative thoughts, all very well stated: Wright has indeed made The God of Gods a highly readable, and necessary, “rich subject of inquiry.”

Other titles by Kailin Wright