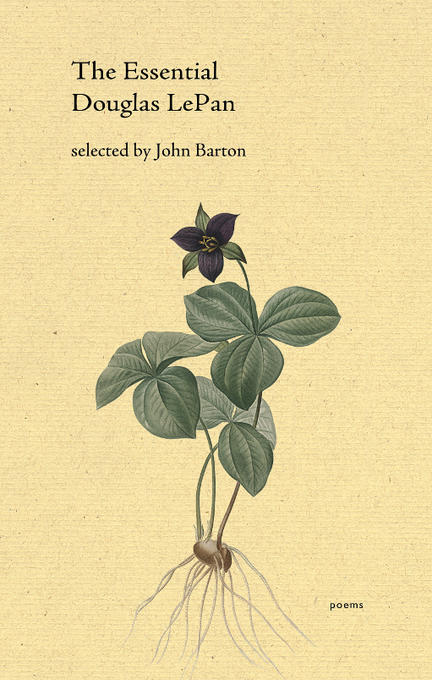 The Essential Douglas LePan presents a wide-ranging collection of poetry-from tense verses on the fog of war to homoerotic love poems to lyrics in praise of the natural world, all in celebration of the heart's blood 'that runs through and supports everything mankind has made'.

Douglas LePan was a Canadian writer, diplomat and professor of literature. Born May 25, 1914, LePan served in Italy with the Canadian Army during the Second World War-an experience he never forgot, and one that informed much of his literary output over the course of his career. He spent over a decade in the Canadian foreign service before taking up an academic life, teaching at Queen's University and at the University of Toronto. He is one of a handful of writers to have won the Governor General's Literary Award both for Poetry (in 1953 for The Net and the Sword) and for Fiction (in 1964 for The Deserter). LePan died in Toronto in 1998.

Thinking of you, I think of the coureurs de bois,
Swarthy men grown almost to savage size
Who put their brown wrists through the arras of the woods
And were lost-sometimes for months. Word would come back:
One had been seen in Crêve-coeur, deserted and starving,
One at Sault Sainte Marie shouldering the rapids.
Giant-like, their labours stalked the streets of Quebec
Though they themselves had dwindled in distance: names only;
Rumours; quicksilvery spies into nature's secrets;
Rivers that seldom ran in the sun. Their resource
Would sparkle and then flow back under clouds of hemlock.

So you should have travelled with them. Or with La Salle.
He could feed his heart with the heart of a continent,
Insatiate, how noble a wounded animal,
Who sought for his wounds the balsam of adventure,
The sap from some deep, secret tree. But now
That the forests are cut down, the rivers charted,
Where can you turn, where can you travel? Unless
Through the desperate wilderness behind your eyes,
So full of falls and glooms and desolations,
Disasters I have glimpsed but few would dream of,
You seek new Easts. The coats of difficult honour,
Bright with brocaded birds and curious flowers,
Stowed so long with vile packs of pemmican,
Futile, weighing you down on slippery portages,
Would flutter at last in the courts of a clement country,
Where the air is silken, the manners easy,
Under a guiltless and reconciling sun.

You hesitate. The trees are entangled with menace.
The voyage is perilous into the dark interior.
But then your hands go to the thwarts. You smile. And so
I watch you vanish in a wood of heroes,
Wild Hamlet with the features of Horatio.

Wild orchid, veined with tenderness,
that reaches down to glacial rock
past moss and rotting ferns and pine-cones
and the droppings of porcupines, raccoons.

This your just signet, seal and impress,
a moccasin plant on granite growing,
pink in the sun-shot shade of June,
frail trumpet, satin-smooth, and clear.

A flower, so fragile, soon will fade.
But while it lasts its fine-meshed membrane
both holds and hides a veined perfection,
a slipper that a prince might search for.

This emblem of the sensitive
and strong, triumphant short-lived song-
for you this emblem will not fade
but blazoning be and heraldry.

Other titles by Douglas LePan

We Are Not Avatars