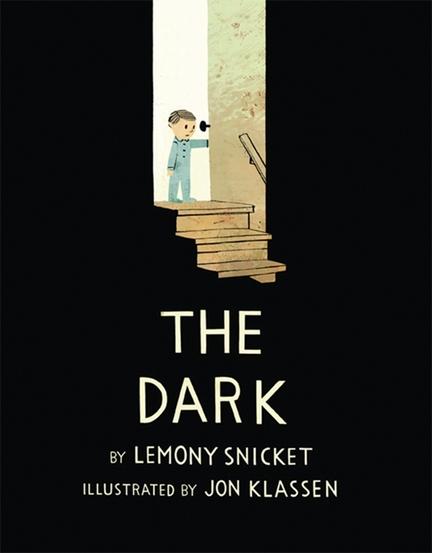 Lazlo is afraid of the dark. It hides in closets and sometimes sits behind the shower curtain, but mostly it lives in the basement. One night, when Lazlo’s nightlight burns out, the dark comes to visit him in his room. “Lazlo,” the Dark says. “I want to show you something.” And so Lazlo descends the basement stairs to face his fears and discover a few comforting facts about the mysterious presence with whom all children must learn to live.

Beautifully rendered with sympathy and wit, this first collaboration between Snicket and Klassen offers a fresh take on a universal childhood experience.

Lemony Snicket was born before you were, and is likely to die before you as well. His family has roots in a part of the country which is now under water, and his childhood was spent in the relative splendor of the Snicket Villa, which has since become a factory, a fortress and a pharmacy and is now, alas, someone else's villa. His true birthplace and details about his family remain a mystery.

Jon Klassen grew up in Niagara Falls, Canada, and now lives in Los Angeles, California. He is the Caldecott Award-winning author and illustrator of I Want My Hat Back and This Is Not My Hat, as well as the illustrator of Sam and Dave Dig a Hole and Extra Yarn by Mac Barnett; The Dark by Lemony Snicket; House Held Up by Trees by Ted Kooser; Cats' Night Out by Caroline Stutson; and the first three books in the Incorrigible Children of Ashton Place series.

Other titles by Lemony Snicket

The Bad Mood and the Stick

Who Could That Be At This Hour?

Other titles by Jon Klassen