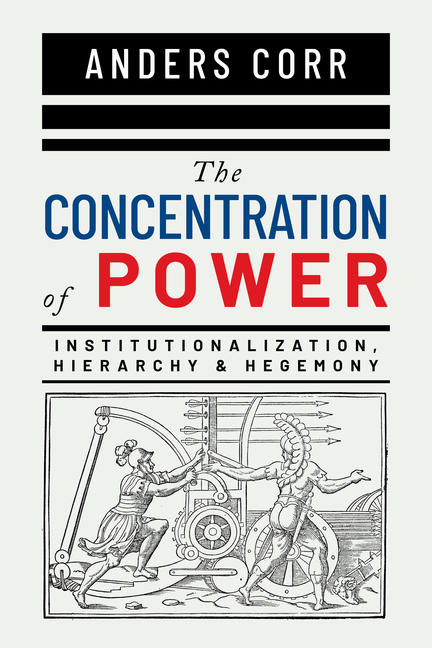 Since the beginning of organized societies, power and leadership have operated in human hierarchies, which are concentrating power in an accelerating manner, according to the comprehensive analysis of Dr. Anders Corr in his book The Concentration of Power: Institutionalization, Hierarchy & Hegemony.

“This sweeping study belongs next to Niall Ferguson and Jared Diamond in our understanding of how the world works and how it can work better.” — James Kraska, Harvard Law School

“A must-read for legislators, military strategists, leading academics, regulators, and anyone interested in the existential threat that the concentration of economic, political, and informational power in an illiberal country like China creates for the leading democracies of the world.” - Kyle Bass, Billionaire investor

“China’s influence in US politics has coincided with the industrialization of China, at the expense of a deindustrializing US. Global corporations, to which US politicians answer, fled high wages and environmental regulations in the US for low wages and lax environmental standards in China. Now, the US is paying the price and might not recover sufficiently to defend itself against China’s growing military. The strategic ambitions of one nation can and have upset the United Nations and the balance between powers. Now the Western world must understand the imminent threats from the hegemonic ambitions of China.”

Hierarchy is the “institutionalization of power,” according to Dr. Corr’s The Concentration of Power, an institutionalization that is concentrating and accelerating over historical time, from prehistory to the present. Corr develops twelve historical theories and applies them to the greatest conflicts of the past and present, including during the age of empires, the present competition between superpowers such as the United States and China, as well as conflicts between the nation-state and emerging supranational powers such as the European Union and United Nations. Corr’s theories apply to domestic politics as well, as illustrated by the evolution of conflicts between communism, fascism, and liberal democracy.

Corr argues that the concentration of power acts as a ratchet. It concentrates when conditions are ripe, and force is applied. Due to mechanisms like subsidies, transfers, and corruption, however, power does not easily return to an unconcentrated state when conditions are not ripe. This dynamic dynamic of the ratchet drives international and domestic concentration of power, with no apparent end other than a global illiberal hegemon at some point in the future.

In sum, The Concentration of Power is a short history of the world, from the beginning to what the evidence indicates should be its logical conclusion. From politics to unions, associations, corporations, and the military, Dr. Corr analyzes them and provides readers with a sense of what the world could face if we allow hierarchy to continue its historical development toward global and illiberal hegemony. Be it in China, the United States, or the European Union, all are vying for global influence and the utilization of the structure of the United Nations to promote either the principles of human rights and democracy, or in the case of Beijing, the exact opposite. This clash between democracy and autocracy on a global level could turn into a final war of world proportions.

No greater stakes have ever existed in world history.

Anders Corr (B.A. Yale 2001 Summa, Ph.D. Harvard 2008) founded Corr Analytics Inc to provide strategic analysis of international politics. He is Publisher of the Journal of Political Risk, which works with a wide variety of authors, from Ivy League professors to Filipino peasants. His areas of expertise include quantitative analysis, public opinion, and international security.

He conducted analysis for US Pacific Command (USPACOM), US Special Operations Command Pacific (SOCPAC), and US European Command (EUCOM) on risks to U.S. national security in Asia and Europe, including in the Philippines, Nepal, Bangladesh, and Ukraine.