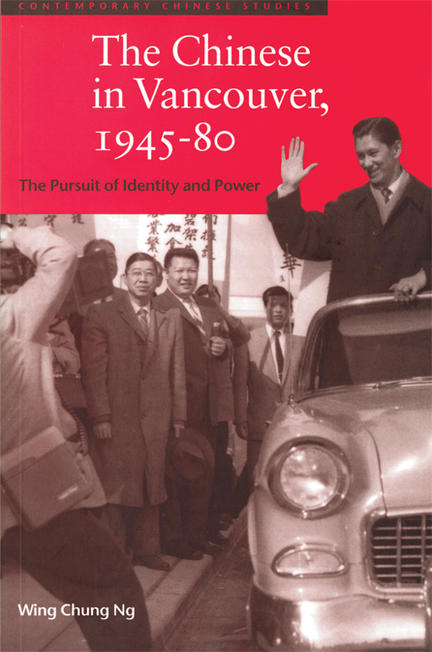 In The Chinese in Vancouver, Wing Chung Ng captures the fascinating story of the city's Chinese in their search for identity. He juxtaposes the cultural positions of different generations of Chinese immigrants and their Canadian-born descendants and unveils the ongoing struggle over the definition of being Chinese. It is an engrossing story about cultural identity in the context of migration and settlement, where the influence of the native land and the appeal of the host city continued to impinge on the consciousness of the ethnic Chinese.

Wing Chung Ng teaches in the Department of History at the University of Texas at San Antonio.

Ng’s analysis allows for a poignant human dimension to frame the inevitable passing of the old-timers’ generation, and also explains why these organizations continues to exist ... This book is a welcome addition to studies of the Chinese in Vancouver, as this community continues to thrive on Canada’s west coast.

... this detailed account includes considerable information on acculturation, socio-economic status, community activities both social and business, and problems associated with race... Writing is clear, organization coherent, details richly documented and gently tied to prior history of mainland China so the book has special value to historians.

Theoretically informed, concise, and solidly documented, Ng’s work is not just about the turbulent and fascinating history of Vancouver’s Chinese community. It also shows just how much the Chinese had to say and to debate among themselves about who and what defined them and their community as Chinese.