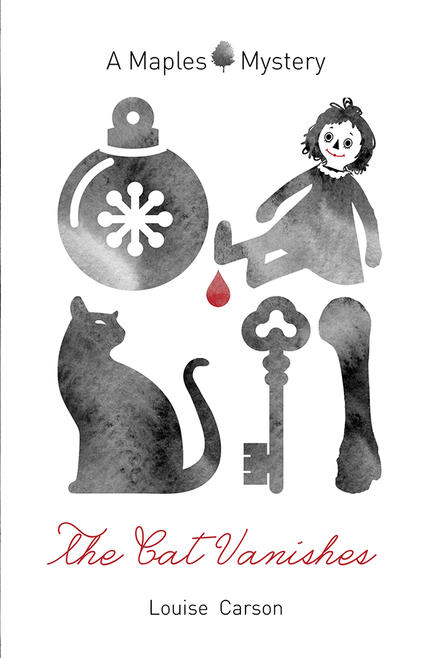 It's Christmas time but many of Gerry Coneybear's friends are away for the holidays and she has no family to celebrate with at the Maples, the old house bequeathed to her by her aunt. Just the 23 cats her aunt left her with. When Gerry first finds a bone in her bedroom, naturally she assumes it's a chicken bone one of the cats has dragged in from the garbage. But it turns out to be from a skeleton buried under the floorboards in the shed where her firewood is stored.  On the up side, the skeleton is over 100 years old. But then, more disturbingly, Gerry finds another body, the local innkeeper's wife, who has been murdered in the basement of her friend Cathy's house, which Gerry has been checking on while Cathy is out of town for the Christmas holidays.

Born in Montreal and raised in Hudson, Quebec, Louise Carson studied music in Montreal and Toronto, played jazz piano, and sang in the chorus of the Canadian Opera Company. Her previous books include the literary mysteries The Cat Among Us and Executor, and the poetry collection A Clearing. Her poems have also been published coast to coast as well as in The Best Canadian Poetry 2013. She's twice been short-listed in FreeFall Magazine 's annual contest, and her poem “Plastic bucket” won a Manitoba Magazine Award for Prairie Fire. Louise has read her work in the Montreal area, Ottawa, Toronto, Saskatoon and New York City. She lives in rural Quebec, where she gardens, writes, and teaches music.

“Bob! Where are you?” Nothing. She edged around the wood to the back wall of the shed where the blue tarp sagged. She frowned. Something had happened to the woodpile. It had collapsed. “Now what?” she muttered. She looked down into a hole full of firewood.

“Cripes! The tree hit the roof, and hit the woodpile, which went through the floor.”

“Miaou!” came from the hole.

“What is it, Bob? The rest of that chicken?” Gerry teased.

But this bone was too large for Bob to lift. Gerry got down on her knees, then had to shift to her belly. “Have you got a dead ox down there, Bob?” Her fingers closed on the bone and she raised it towards her face. She knew this one had come from no farmyard animal.

After the police had left, taking as many of the bones as they could find and forbidding Gerry to go near the hole – why would she want to? she gloomily wondered – she made her usual afternoon coffee.

She felt a bit sick. It was all very well for Prudence to experience whatever it was she’d experienced, but actual bones in the ground on Gerry’s property – well, that wasn’t even a bit entertaining.

She sat in front of the fire, clutching her mug. “At least I took out lots of wood before, before – where is Bob now?” She’d totally forgotten him in the dizzying flurry of activity which had followed their grisly discovery.

She’d phoned 911 but had been clear this was no emergency, so had been given another number to call, had called it, had mumbled a few words about finding old bones under her shed floor, and waited.

It must have been a slow day because someone came rather soon, took a look and phoned someone else. The someone else came with a few people and collected the bones. “Not to worry, miss,” one of them said, “we can tell they’re old.”

The woman laughed. “Not that old. But old enough that we know we’re not looking at a fresh crime.”

“The bone!” She rushed to the kitchen garbage and rummaged until her fingers closed around the bone Bob had brought to her bedroom. “I should give that to the police.” She put it on the mantel.

She ran a hot bath and soaked, which usually helped when she felt upset, then changed into her trusty black dress, black tights and funky ankle-high black boots. “Colour. I need colour.” She rummaged until she found a gauzy green scarf. She even put on lipstick. As usual, she cheered up when she looked at her reflection. Dark red hair, blue-green eyes, freckles. “Enjoy yourself!” she urged, thinking of the bones. “Life is short.”

When she got to the inn, one of the Parsley teens was there to direct her to a parking place. As she gave her coat to another teen in the lobby, she joked, “Don’t your parents ever give you kids time off?” The girl smiled sourly. Gerry slunk into the dining room, then straightened, glad she’d dressed up.

Live music – a singer and a guitarist – performed softly from one corner. A roaring fire blazed. And many, many Parsleys and other notables of Lovering filled the room with happy chatter.

Gerry took a glass of white wine from a youngster behind a table and looked around for her hosts. Betty Parsley was probably supervising in the kitchen. A roar of laughter told her she’d located Phil Parsley, standing with a group of men. Gerry walked over to the group. “And then I said, ‘Will no one rid me of this nagging wife?’” The men burst into laughter.

“Gerry!” A large man, Phil gave her a bear hug. Obviously, he was already full of good cheer. “Glad you could make it. Cats not keeping you too busy? Not coughed up too many furballs?” He roared with laughter at this incredible piece of wit and his cronies joined in.

Gerry’s eyes widened but she kept her smile fixed in place. “No, no. They’re no trouble. Oh, is that –?” She pretended to see someone she knew over by the buffet table and retreated.

She knew it. The town saw her as a laughingstock. A solitary female living with twenty three cats. She fumed as she piled food on her plate. She’d show them. She’d –

“Hey, Gerry, leave some for the rest of us,” a quiet voice urged at her elbow.

She turned, ready to lash out, but saw only Doug Shapland’s nice face and unassuming smile. She looked at her plate. It was laden with mini-quiches, fried shrimp, roast turkey, stuffing, mashed potatoes. “Oh, my gosh, Doug. You take half.” She scraped a portion onto his empty plate. “I guess I was blinded by fury.”

“Sounds serious. Let’s get a table.”

The restaurant tables had been bunched up on one side of the room so people could circulate, chat or dance. They found a good spot near a window and ate their supper. Well, Doug ate. Gerry just stared at her food.

“It’s the cat thing. People make remarks. I get angry.”

He paused eating to say, “Your quiches are getting cold.”

She bit into one and relaxed. “Spinach, nutmeg, Swiss cheese. Yum. As good as Cathy’s.”

“She may have made them,” he replied. “I think Betty buys from her. That’s better. As for the cat thing, embrace it. Make it work for you.”

“How would I do that?” She took another quiche from Doug’s plate – mushroom and thyme in a cream sauce.

“I dunno. You’re an artist. Paint portraits of the cats. Support a spay and neuter clinic with the profits. Protest pet stores selling cats when so many are in shelters.”

Gerry said slowly, “You mean really become a crazy cat lady, but do good with it.”

Other titles by Louise Carson

Clutter of Cats, A

The Cat Among Us

Cat Among Us, The