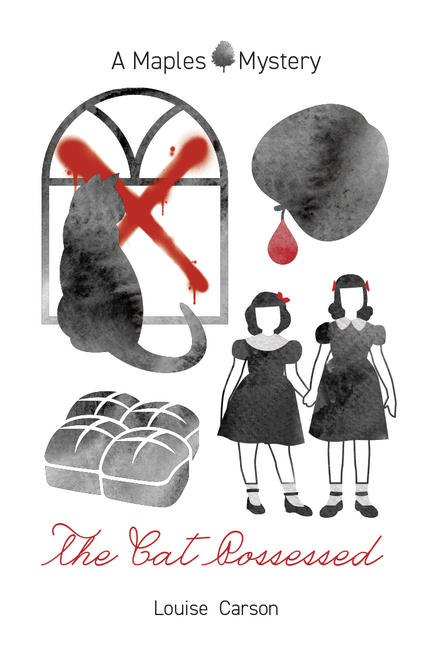 It's April 1st and young artist Gerry Coneybear, inheritor of her Aunt Maggie's big old house The Maples (and her aunt's twenty cats!), wishes her mountain of bills was a joke. She's just self-published her children's book The Cake-Jumping Cats of Dibble, and that cost money. Plus the valuable painting she was hoping to sell is missing from the auctioneers'. And on top of everything else, her kitten Jay is acting weird, keeping her up at night. It's almost as if the cat's possessed.

At least Gerry's personal relationships are going well: with her boyfriend Doug, part-time house keeper Prudence, and the odd assortment of friends she's made over the year since she moved to Lovering, a tiny village by the Ottawa River. All seems well as Gerry bakes treats for the art class she teaches at home, cleans out the woodshed and plans a surprise birthday party. But then one of her students begins sketching ghosts, someone eggs Gerry's home, and she feels she's being stalked. There's trouble with Prudence's long lost husband too.

Things come to a head when Gerry's house is tagged while she's in it, her house is rammed by a car, and one of her relatives attacks another. Add in a suspicious death and you have another cozy Maples Mystery.

Born in Montreal and raised in Hudson, Quebec, Louise Carson studied music in Montreal and Toronto, played jazz piano, and sang in the chorus of the Canadian Opera Company. Her previous books include the literary mysteries The Cat Among Us and Executor, and the poetry collection A Clearing. Her poems have also been published coast to coast as well as in The Best Canadian Poetry 2013. She's twice been short-listed in FreeFall Magazine 's annual contest, and her poem “Plastic bucket” won a Manitoba Magazine Award for Prairie Fire. Louise has read her work in the Montreal area, Ottawa, Toronto, Saskatoon and New York City. She lives in rural Quebec, where she gardens, writes, and teaches music.

Other titles by Louise Carson

Clutter of Cats, A

The Cat Among Us

Cat Among Us, The