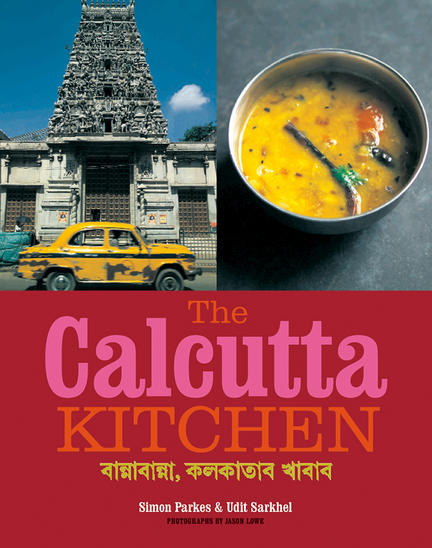 “What you’ve got to remember about us Bengalis,” a good friend once told Simon Parkes, “is that we’re only really interested in three things: educating our children, reading books, and food.” Bengalis have a passion for good food—its authenticity, its freshness, its part in social occasions, and the pleasure of serving it at the table. The Calcutta Kitchen captures the essence of those pleasures through the evocative narrative of the BBC Food Programme’s Simon Parkes, the recipes of renowned chef Udit Sarkhel, and the pictures of award-winning photographer Jason Lowe. Calcuttans know and adore fish, vegetables, and desserts in particular. They have a curiosity about food that never fades, and so they have embraced influences from around the world—most notably the English, Armenians, Jews, Tibetans, Chinese, Burmese, and Portuguese. Calcutta, and this book, has a taste of each of these cuisines. Until recently it was nigh-on impossible to taste Bengali cooking unless you were invited to a private home, yet this is some of the most sophisticated food in India. With its inexhaustible roll-call of fish and vegetables, its pungency derived from the widespread use of mustard (both seeds and oil) and its tempering with a blend of five spices known as panch phoron, it is an evolved yet accessible cuisine. The Calcutta Kitchen brings you recipes from one of the best-known Bengali chefs, Udit Sarkhel, and snapshots of the fish ponds, markets, artisan food producers, restaurants, clubs, cooks, gourmet, and street foods that play a part in the city’s rich culinary culture.

Simon Parkes is a presenter on The Food Programme on BBC Radio 4, and won the Glenfiddich Award for Radio in 2004 for his program Bombay Lunchboxes. Simon also writes for The Calcutta Telegraph and the BBC Good Food magazine, and has spent a year living in Calcutta, reporting on food for BBC Radio 4. Udit Sarkhel has four London restaurants: Calcutta Notebook, Sarkhel’s Indian Cuisine (awarded a Bib Gourmand by Michelin), Sarkhels of East Sheen, and Dalchini. He has been classed as one of the top five chefs in Britain by Waitrose Food Monthly.

"Calcutta Kitchen rounds up recipes for dishes bequeathed to Calcutta (now Kolkata) by its many rulers...The authentic, inviting and unintimidating recipes, excellent commentary and photography reminiscent of movie stills helped me finally get my hands around what hitherto seemed an enigmatic and formal cuisine...Calcutta Kitchen brings out the hallmarks of Bengali dining- the use of mustard, a thorough preoccupation with freshness, a course-by-course approach to the meal (alone among Indian cuisines) and, most of all, a love of fish."

"Mr. Parkes explores the city and its food with 10 witty, eccentric, thoughtful essays. His angles include the local passion for freshwater fish rushed to markets from an extraordinary wetlands system, declining ex-outposts of the British Raj like the Tollygunge Club and the many ethnic presences that enliven the flavor of Calcutta... His lively summings-up are magnificently reinforced by the photographs of Jason Lowe, whose chronicling of faded beauties, brash incongruities and glory-amid-grime cooking is alone worth the price."

Other titles by Jason Lowe

A Journey for Food Lovers