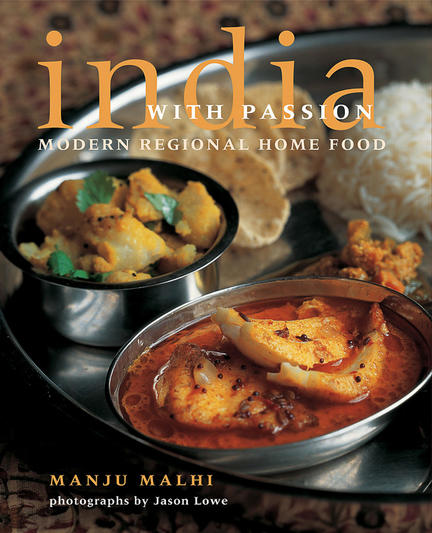 Modern Indian home food is as varied and eclectic as any cuisine in the world. But unlike Indian restaurant cooking, it does not require legions of chefs to spend hours preparing spices and pastes or slow-cooking stews and curries. Deeply-flavored dishes are created simply, in a way that fits in with our modern busy lifestyle. The regions of India have long enjoyed different styles of food, using different ingredients and cooking techniques—and this is never more apparent than in the country’s home kitchens. There are the kebabs, koftas, tikkas, dals, flatbreads, and tandoori dishes of the North, where warming dried spices bring comfort during the harsh winters. From the West, where rice is a staple, come spicy seafood and chicken dishes. The South brings us coconut dishes, vegetarian recipes, biryanies, and dosas, all flavored with deliciously fresh spices, and highlights from the East include noodles, fresh-water fish, and desserts. Some of the dishes in India with Passion are steeped in tradition, while others are based on new creations that Manju has enjoyed in India’s homes, cafes, and restaurants. But all are authentically Indian, rich in flavor, and simple to cook.

Manju Malhi is renowned for her simple approach to Indian cooking. She has written several cookbooks and she presents her own television show called Simply Indian. Manju developed her passion for Indian cooking from watching her parents cook as a child, and refined her skills while studying in Bombay for four years.

"With photographs that are totally drool-worthy, the recipes just seem to pop out begging me to give them a try. Written with utmost passion, the book is divided into four parts-North, South, East and West, with each section comprising of traditional and some not-so-traditional recipes from that region. With a wonderfully drafted introduction, detailing the kind of food eaten, various cooking techniques, and it's history with the people, each section brings you a few steps closer to understanding the diversity that India offers and appreciating the effect it brought about to the Indian cuisine....As you move through each section of the book...it's hard not to notice the change in cooking style and the flavors prominent in each region. While the North may be proud of its history with the Mughals and their love for rich creamy curries, the South doesn't fail to enhance you with its love for the sweet coconut and pungent curry leaves. Where you may enjoy the sweetness of the West, there's the spiciness of the East that could take your breath away. When cooking for friends and family, I tend to not fuss too much with the traditional ways of Indian cooking. And I think that's why Manju's recipes struck a chord with me. Not a traditionalist herself, she happily suggests easy substitutions where ever possible. While some of the recipes are down-right classics, many of them were created in her own kitchen using everyday ingredients and enhancing the simple flavors we all love. Renowned for her simple, homely approach to Indian cooking, Manju Malhi has quickly become a favorite in my kitchen."

Other titles by Jason Lowe

A Journey for Food Lovers