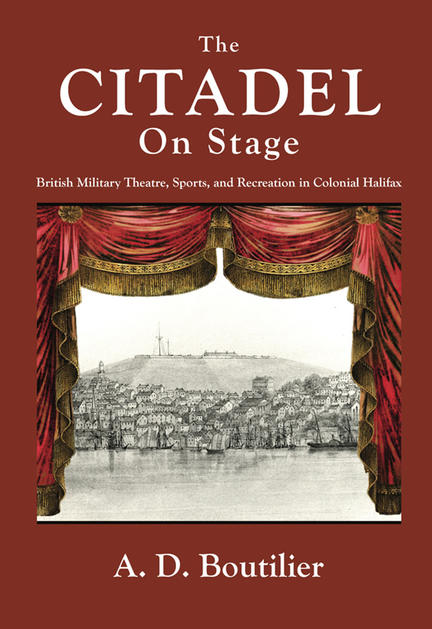 The subject nominally is the Halifax Citadel, a landmark known to everyone, with its museum and fortress, one of the most visited national historic site in Canada.

However, few know of the connections of the garrison officer corps to many aspects in the everyday life of Maritimers. This book will change that.

It is extremely well-researched and a great contribution to our local and regional history, but at the same time humorous, poking fun at the snobbery of the city establishment and the influence of religion, as well as the hypocrisy evident in the earlier years of the city. In many ways, it seems little may have changed with municipal government.

Did you know that the entire horse racing and horse-breeding within the Maritimes today stems form the early British garrison troops?That includes: Willow Park, Windsor Junction, Windsor, Truro, Sydney, Charlottetown and St John, NB and more. What about theatre? … the first play was called Neptune (1606), hence the connection to out best-known playhouse. the KIng's Theatre in Annapolis with the garrison heading to Fort Anne in the War of 1812; The Savoy in Glace Bay (after the fall of Louisburg). Were you aware that during the American Revolutionary War, troops from Halifax performed in Boston, New York and Philadelphia?

And ocean racing and in-shore regattas; those began first in Halifax Harbour and the North-west Arm by the garrison officers, but later spread to dozens of Atlantic Canadian and USA coastal towns and cities. A SIGNIFICANT MARITIME TRADITION begun by soldiers when they were not at war.

That officers exercised their mounts on the Garrison Grounds and stabled them is the exact spot (well newer stables) where the Bengal Lancers and HRM Mounted Division keep their mounts today ... and the races on the North Commons began near todays' skating oval… and that harness racing took place on the Commons until the 1960s, surrounding the softball and baseball diamonds.

Alex D. Boutilier was born in Sydney Mines, Cape Breton and grew up in the shadow of Princess Colliery. His interest in theatre began as a teenager when he was involved in several stage productions while attending high school. Later, he acted in performances put on by the Dartmouth Players in the early 1990s.

Alex' ancestors were among the Foreign Protestants, or Huguenots, from France who arrived in Halifax in 1752 and went onto found Lunenburg in 1753. He has a keen interest in the culture, customs, and traditions of diverse societies having travelled extensively throughout England and France visiting medieval churches, museums, archeological sites and ancient ruins. He has also toured all British and French colonial fortifications in eastern Canada and Ontario. Alex believes that history is not fixed in time; that it is constantly changing as new information comes forward.

His favourite authors include social historians, such as J. C. Furnas; cultural writers like Arthur Koestler; the literary critic, Harold Bloom;and his favourite playwright is, of course, the great bard, William Shakespeare. Alex loves studying, researching and writing social history, which he finds highly informative and suggests it can be "unexpectedly hilarious" at times.

Alex studied at Saint Mary’s University and graduated with BA degrees in English and Psychology, as well as an MA in Atlantic Canada Studies. From 1998 to 2005, he was an instructor for the Saint Mary’s University Writing Centre. This book is his first publication, which is based on his Master’s thesis. His lifelong occupation was in sales and marketing for several industrial corporations.

He currently lives in Fall River, N. S. with his wife, Rose.

During the early years of horse racing on the common New Brunswick horses were setting track records, and the Halifax Turf Club was losing face as well as money. By 1836 it became obvious that the club had to redress its situation if it wanted to seriously compete and stay in the game. When the legislature sat in February the members went into discussion concerning a proposition put forward by James Boyle Uniacke for a grant of money to import horses for the province, and several members expressed their opinion as to the most suitable breed. John Young, a native of Scotland, a Reformer, and a man who, while looking up at another would at the same time cut him off at the knees, stated that he was in favour of horses for farming purposes, of which he was considered a good judge. Uniacke, a Tory, who was now president of the turf club, owned a stud farm and highly recommended the importation of thoroughbreds. Uniacke had a sarcastic wit and loved a timely joke, and in his remarks he scoffed at the truck horses kept by Mr. Young on his farm known as Willow Park, which were sometimes employed in driving agricultural produce to market. He the made a sly allusion comparing Mr. Young to his cabbages which brought convulsive chuckling from the members. Now, Mrs. Uniacke, the daughter of wealthy merchant John Black, was a lady possessed of a large fortune at the time of her marriage to James in 1832, but, unluckily, she was not very attractive; and when the chuckling stopped, Mr. Young, who had been sitting there taking it all in as if witnessing a play, rose to reply, and with an omniscient smile on his face declared, "We, in Scotland, Mr. Speaker, select our horses upon the same principle that some gentlemen select their wives, not for their beauty, but for their sterling worth." The Reformers and the Tories eyed one another and then the house shook its sides and dissolved into laughter. The debate was over, the proposition died on the floor, there were titters for a month: it was a good jest forever (p. 249-50).

Comedy of Manners, or High Comedy rests on stock assumptions about class, propriety, snobbery, and social aspiration; and is mostly concerned with the amorous intrigues of witty and sophisticated members of an upper-class society; the actions of those who imitate the manners of that society overlap the audience’s anticipation for the joke to come, which, when it does, causes much raillery and laughter. Farce, or low comedy, a natural companion to satire, presents ludicrously exaggerated and improbable situations played by stock characters – the cuckold, the miser, the stutterer, the hunchback, the foreigner – who appear as comic, intellectually challenged, or mocking figures according to the differing emotional attitudes they arouse in spectators of a particular culture. Indeed some critics have argued that the comedies are more dramatic than the tragedies, in that their scope of reference is socially more communal. For the gentry, comedy and farce offered escape from the frustrations and anxieties caused by self-interest, and it provided the necessary catharsis for those transients who were homesick for England. And laughter, like a private language, brings everyone together. As well, the garrison officers who acted enjoyed the prestige, along with the cordial esteem of the genteel society of Halifax.

Subscription theatre was also class conscious; and the higher rank of the military personnel,on stage was reflected in the social hierarchy of the audience, and vice versa. The costuming of the players in contemporary dress added to the mirror effect since the elite patrons seated off stage looked very much like the actors on stage. This reflection rendered them participants as well as spectators, and also established and reaffirmed the identity of genteel society as being well-bred. However, comedy of manners focused on the pretentiousness and conceit of that identity; and the actors themselves probably appealed to the audiences’ sense of the ridiculous, for the female parts were always played by males; sometimes by teenage boys of the town but usually by military officers. These officers were young subalterns or Ensigns. The general audience was asked to suspend its disbelief but certainly cross-dressing was an easy opportunity to evoke some cheap laughter; and humour takes the edge off everything.… Although concerned with amorous intrigues, in comedy of manners there were no passionate embraces, and very little slap and tickle, so the military could maintain its dignity.

It was understood, in the restricted culture of that time, that women were by no means equal to men. Women were given an assigned sphere and were confined to the private realm, while men occupied and dominated the public realm of pulpits, politics, and power. Cross-dressing, then, was unavoidable in regimental performances. The very notion of a woman acting on stage would have been objectionable to most; society itself put women under repressive taboos and austere attitudes. An anonymous observer wrote to the Gazette: “From the moment that a woman steps upon the stage she becomes public property, and even if she be really pure and virtuous it is universally believed that she only affects it for a purpose.” This was the conventional wisdom of the time. The social sentiment and conceit up until the end of the Victorian era was that women acting in drama were exhibiting their true personality and independence; and being independent was a short step from being promiscuous, which says more about English sexual hypocrisy than about the intentions of the playwrights. Audiences had a tendency to associate the character in a play with the character of the actress playing the role. If a woman played the part of a concubine, or a prostitute, it would be unwomanly, and leave a taint, not only on her character, but on the character of all women, which would not be morally acceptable. The word actress, then, was a euphemism for loose woman.

While the male dominated culture and social conceit for the unwritten rule barring women from acting in garrison productions were to be taken seriously, the church’s reasoning that pious expression would strengthen religious belief should also be a real consideration. However, from time to time unmarried actresses from the United States would appear with professional troupes on the stages of Halifax, and to avoid the tawdry connotation of promiscuity they would use the honorific title of ‘Mrs.’ So that the audience would recognize them as being chaperoned.. The main players in Halifax productions in those years are credited as officers of the garrison or gentlemen of the town, but during those years the garrison theatrical society was altruistically losing money. So in the summer of 1797 the society hired Charles Stuart Powell, a professional theatre manager from Boston, who directed its affairs until his death in 1811. Powell’s wife and his two daughters, Fidelia and Cordelia, were always given the leading female roles.

How were they different from what had been the custom in Halifax, or indeed would that lead to change for women in the local theatre?

Other titles by Joel Zemel

Other titles by Francis Mitchell

a miner's investigation into the enigma of Oak Island, the Mesoamericans and the treasures buried therein

- Huskies, In Pursuit of Excellence

- Through the Gates of Hell

the private war of a footslogger from 'The Avenue'