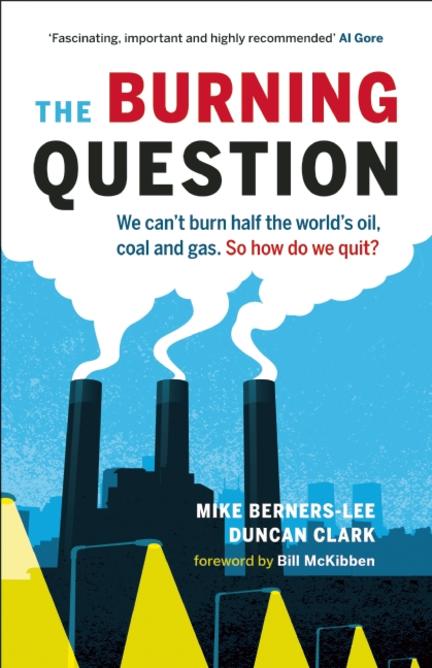 The Burning Question reveals climate change to be the most fascinating scientific, political and social puzzle in history. It shows that carbon emissions are still accelerating upwards, following an exponential curve that goes back centuries. One reason is that saving energy is like squeezing a balloon: reductions in one place lead to increases elsewhere. Another reason is that clean energy sources don't in themselves slow the rate of fossil fuel extraction.

Tackling global warming will mean persuading the world to abandon oil, coal and gas reserves worth many trillions of dollars—at least until we have the means to put carbon back in the ground. The burning question is whether that can be done. What mix of politics, psychology, economics and technology might be required? Are the energy companies massively overvalued, and how will carbon-cuts affect the global economy? Will we wake up to the threat in time? And who can do what to make it all happen?

Mike Berners-Lee is a leading carbon consultant and author of How Bad are Bananas?, one of the bestselling green books of recent years.

Duncan Clark is a Guardian environment journalist and author of various successful books, including The Rough Guide to Green Living.

Jutting lighthouse-like among the offerings of science publishing this year is this handbook on climate change and what we need to do about it. Mike Berners-Lee and Duncan Clark have lit a beacon for the wayward, listing ships of climate thinking … This is number-crunching and synthesis at their best, richly informed by realities political and psychological as well as scientific. —Nature, International Weekly Journal of Science

There have been many books on this issue but The Burning Question lives up to the urgency of its title. Clearly set out, steely with the numbers but fair and humane in its assessments of human strengths and weaknesses, it is a book to reignite the debate. — Peter Forbes, The Guardian

"Sensible and well documented . . . recommended to those new to this topic." —Publisher's Weekly

Other titles by Mike Berners-Lee

How Bad Are Bananas?

The Carbon Footprint of Everything

A Passion for this Earth

Writers, Scientists, and Activists Explore Our Relationship with Nature and the Environment