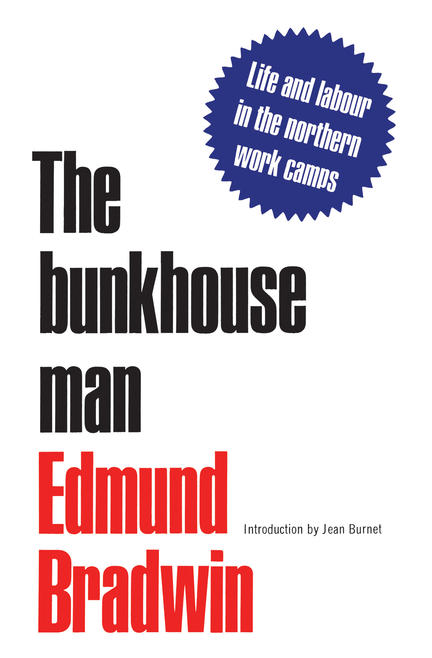 Journalists and poets, economists and political historians, have told the story of Canada’s railways, but their accounts pay little attention to the workers who built them. The Bunkhouse Man is the only study devoted to these men and their lives in construction camps; a pioneering work in sociology, it is still the best description of what it was like to be a working man in Canada before the First World War. E.W. Bradwin drew on his own experience as an instructor for Frontier College, working alongside his students during the day and teaching at night, to present this graphic portrait of life in the camps from 1903 to 1914. No detached observer, Bradwin played a vigorous role trying to improve the lot of the men—practicing the sociology of engagement advocated by radical sociologists today.

Work camps have existed in Canada from early pioneer times to the 1970s and are unlikely to disappear. In the years of Bradwin’s study there were as many as 3,000 large camps employing 200,000 men, 5 per cent of the male labour force. Like the settling of the prairies, these camps are a characteristic Canadian phenomenon, but they have never drawn comparable attention. The republication of The Bunkhouse Man, with an introduction by Jean Burnet, makes available once more a work essential to the exploration of Canada’s history and social structure.

Edmund W. Bradwin went into the camps in 1904 as a worker-instructor for Frontier College. Later he became principal, a post he held until his death in 1954 at the age of seventy-seven.

Jean Burnet (1920-2009) was Professor Emerita and former Chairman of the Department of Sociology at Glendon College, York University. She was a member of the research staff of the Royal Commission on Bilingualism and Biculturalism, and is the author of Next Year Country, published by the University of Toronto Press.

Other titles by Jean Burnet

A Study of Rural Social Organization in Alberta

A Study of Rural Social Organization in Alberta