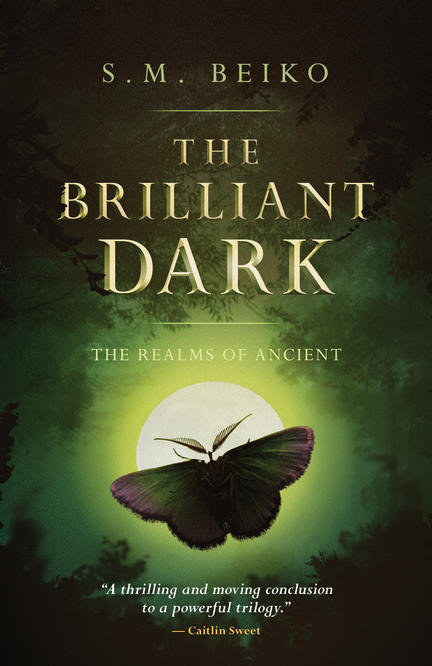 Marked by Darklings and Death alike, Saskia is a mechanically minded Mundane, raised by Barton and Phae on daring stories about Roan Harken. But the world Roan left behind is in turmoil. The Darklings now hang in the sky as a threatening black moon, and with the order-maintaining Elemental Task Guard looking to get rid of all Denizens before they rebel, Saskia’s only option is to go into the Brilliant Dark and bring Roan and Eli back.

But nothing is ever that simple.

The Brilliant Dark is the final, thrilling chapter in this series about gods, monsters, and the people who must decide if they’re willing to pay the ultimate price to protect the family they found . . . in a world that may not be worthy of saving.

S.M. Beiko is an eclectic writer and artist based in Winnipeg, Manitoba. She also works as a freelance editor, illustrator, and graphic designer. Her first novel, The Lake and the Library, was nominated for the Manitoba Book Award for Best First Book as well as the 2014 Aurora Award. The first novel in this series, Scion of the Fox, won the 2018 Copper Cylinder Award.

“A storyline with twists aplenty. The cast is multiracial and multicultural, with Scottish and Japanese lead Saskia, returning supporting characters such as Inuit Natti (who explicitly sees the intersectionalities at play in the new order), and other minor characters; both straight and lesbian romances are represented, and there’s a genderqueer character. Highly sophisticated and fully immersive.” — Kirkus Reviews

“In Children of the Bloodlands, Saskia was a child. When The Brilliant Dark begins, she’s seven years older and trying desperately to be wiser, as the fate of her friends, and multiple worlds, rests with her. In this final book of her Realms of Ancient series, Beiko leads Saskia and her readers back and forth in time to tell a story about stories, and the ways in which they destroy, redeem, end, and endure. It’s a thrilling and moving conclusion to a powerful trilogy.” — Caitlin Sweet, author of The Door in the Mountain and The Flame in the Maze

“For those of us in the know, author S.M. Beiko’s imagination and style are a breath of fresh air in a genre of literature that can, at times, seem heavy-handed and laden with tired tropes. With The Brilliant Dark, the author brings her celebrated prairie-goth series to its thrilling end. This final instalment is an incredible achievement — passionate, engaging, and innovative in all the right ways. The Realms of Ancient series is Canada’s answer to Neil Gaiman’s American Gods — an absolute must-have for fans of Canadian science fiction and fantasy literature.” — Charlene Challenger, author of The Voices in Between and The Myth in Distance

“The third book in The Realms of Ancient series features epic world-building, rich mythology and high-stakes adventure.” — Globe and Mail

“The Brilliant Dark has some exciting action scenes, and Saskia is an interesting character struggling to understand her place as a Mundane in a world of myths. The Denizen-Mundane conflict is compelling with its resonances of real-world repression and the individual stories of conflicted loyalty and betrayal.” — CM: Canadian Review of Materials