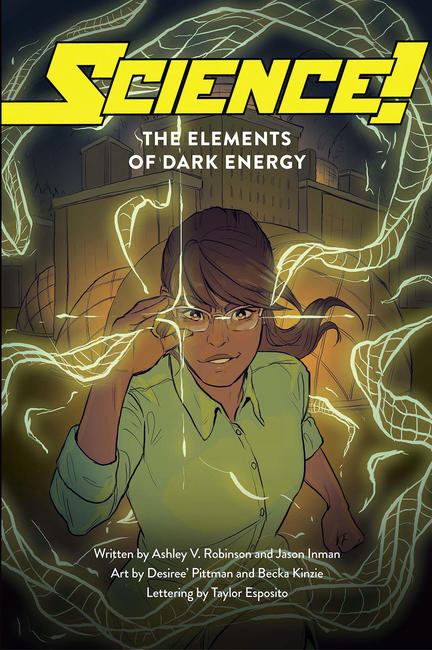 Science! is the story of Tamsin Kuhn Trakroo, a fourteen-year-old girl who is already the smartest Theoretical and Applied Physicist in any room. Yeah, she’s that super smart! Tamsin has just started studying at The Prometheus Institute which is only the world’s most famous and prestigious science school.

The Institute is a futuristic wonderland filled with genius teachers (some who might not be of this world), and floating helper robots known as S.T.A.T.s.But Tamsin is stressed, and if your dead father talked to you through your super-cool science glasses, you’d be stressed out too.

That’s right, her father, the world-renowned Dr. Thomas Trakroo uploaded his consciousness before his death and now lives as a hologram stored in Tamsin’s glasses. Her father claims that Lucan Laveran, headmaster of The Prometheus Institute, is his murderer, and is on a mission to destroy the Institute! But Lucan just offered Tamsin a really cool position as his assistant. He can’t be a murderer, right? Can she trust her weird holographic Dad?

Tamsin’s really cute roommate, Garyn, is the only one that she can trust right now. However, Garyn’s just discovered a dangerous energy source that could win her the Prometheus Institute Award for Superior Science, or it could tear a hole in the very space/time continuum!

THE NERDY GIRL EXPRESS -- What is great is that the story is remarkably diverse in terms of the primary characters. Not just that, but all three of the core friend group are exceptionally bright women. Tamsin is able to use her own knowledge, with a boost from her father's holographic presence, to learn a great deal and Garyn has her own secret lab and experiments that we get to see outside of Tamsin's narrative. These stories do begin to connect and the connection between these two is very strong. Sally, their other friend and roommate, adds a voice of dissent and sort of grounds the two of them. Beyond the mystery at the core of the book, there are fun learning moments provided by the S.T.A.T.s throughout that give readers some insight into the science being shown throughout the book. The story is also full of twists and turns, especially once an experiment goes wrong. I loved this story and would be curious to see more of this world in the future.

Other titles by Becka Kinzie