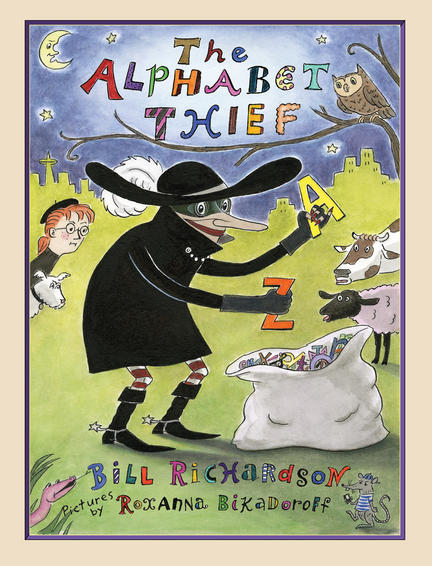 When night falls, along comes a peculiar thief who steals each letter of the alphabet, creating a topsy-turvy world as she goes.

The alphabet thief stole all of the B’s, and all of the bowls became owls…

It seems that no one can stop her, until the Z’s finally send her to sleep so that all the other letters can scamper back to where they belong.

Bill Richardson’s zany rhymes and Roxanna Bikadoroff’s hilarious illustrations will delight young readers with the silly fun they can have with language — and may even inspire budding young writers and artists to create their own word games.

CCSS.ELA-LITERACY.RL.K.4
Ask and answer questions about unknown words in a text.

Roxanna Bikadoroff is an award-winning Canadian artist whose illustrations have been published internationally for more than twenty-five years. Her work has been published (and shown) in Canada, the United States, Japan, England, Ireland, Europe, Romania, Brazil, Israel, and China. Her illustrations have appeared in hundreds of magazines and newspapers, including The New Yorker and The Walrus magazine and on numerous book covers. She works in a variety of mediums, has won numerous awards, and has served twice as a judge for the National Magazine Awards. She was born in Montreal and currently lives in Vancouver.

This sneaky romp will do well one-on-one.

The text will inspire a passion for humorous wordplay.

Sure to delight wordsmiths of all ages. A fun read-aloud that lends itself to curricular application.

A fun romp that lends itself to both quiety amused solo reading and boisterous read-aloud sessions.

A smart pick for language lovers of any age.

The clever story in rhyme and playful ink-and-watercolor illustrations depicting word transformations make this small book one to add to my collection of alphabet books.

Other titles by Roxanna Bikadoroff

The Man Who Knew Everything

The Strange Life of Athanasius Kircher

From A to Zed: Sara O'Leary on Canadian Alphabet Books

A recommended reading list by author of new book, Owls are Good At Keeping Secrets.

13 Picture Books to Fall in Love With This Spring

These gorgeous books will warm your heart, and whoever you're reading them to will like them just as much as you do.