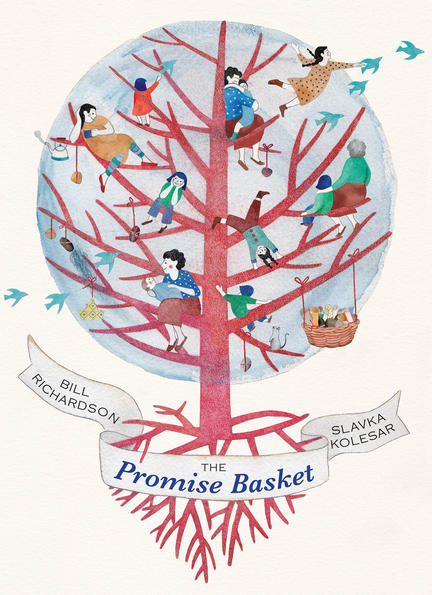 From award winning author Bill Richardson and highly acclaimed illustrator Slavka Kolesar comes a beautiful story about the love between a mother and daughter where a promise makes the perfect gift.

A stone when it’s thrown can damage, can break,
but nothing can shatter the promise I make.

So begins the poem a mother writes on a scrap of paper. She wraps the paper around a stone and places it in a basket to give to her daughter on her first birthday. They are poor, but the mother is determined that gifts will be given when gifts need giving. She keeps her promise, and the Promise Basket, too.

Every time there is a need for gifts, the mother finds a pretty stone to tie up with paper and ribbon, and gives it to her daughter in the basket. She continues the tradition over the years until her daughter has a baby of her own…

The love between a mother and her daughter is celebrated in this lyrical story from Bill Richardson, featuring colorful illustrations by Slavka Kolesar.

CCSS.ELA-LITERACY.RL.4.2
Determine a theme of a story, drama, or poem from details in the text; summarize the text.

SLAVKA KOLESAR has a BFA in visual studies and art history from the University of Toronto and training as an early childhood educator. She has illustrated Ulysse by Suzanne de Serres, Le Nom de l’arbre by Stéphanie Bénéteau and La Légende de Carcajou by Renée Robitaille, which was a finalist for the Governor General’s Award. She was the 2017 TD Summer Reading Club illustrator. Slavka lives in Fernie, BC.

[W]ith rhythm and repetition, the narrative mixes messages of unending maternal devotion with subtle allusions to life’s challenges. . . . Whether brought to a baby shower or given to a graduate, this story of steadfast parent-child bonds may become a perennial gift favorite.

Other titles by Slavka Kolesar

The Sun is a Shine

by (author) Leslie A. Davidson
illustrated by Slavka Kolesar