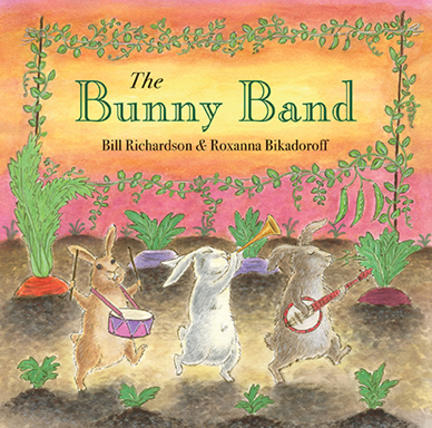 A rhyming romp of a tale about a badger and a band of bunnies.

Lavinia the badger loves vegetables and tends her garden with care, but one morning she discovers that her lettuce has been nibbled and her potatoes and beans have disappeared! She decides to set a snare for the culprit, who turns out to be a frightened bunny. When Lavinia threatens to turn him into stew, the bunny pleads for his life, promising a rich reward if she lets him go.

The next night, when the moon rises, Lavinia is amazed to see dozens and dozens of bunnies in her garden, carrying banjos, bassoons, harps, ukuleles, trumpets, bagpipes, fifes and drums. Night after night, the bunnies play enchanting music, and Lavinia’s vegetables grow and grow and grow. At the end of the season, Lavinia lays her table with a wonderful vegetable feast for the bunny band, who promise they’ll return in the spring.

Once again, Bill Richardson and Roxanna Bikadoroff bring us a story full of old-fashioned charm and humor — a pure delight.

CCSS.ELA-LITERACY.RL.1.1
Ask and answer questions about key details in a text.

Roxanna Bikadoroff is an award-winning Canadian artist whose illustrations have been published internationally for more than twenty-five years. Her work has been published (and shown) in Canada, the United States, Japan, England, Ireland, Europe, Romania, Brazil, Israel, and China. Her illustrations have appeared in hundreds of magazines and newspapers, including The New Yorker and The Walrus magazine and on numerous book covers. She works in a variety of mediums, has won numerous awards, and has served twice as a judge for the National Magazine Awards. She was born in Montreal and currently lives in Vancouver.

. . . plenty of small details for children to study. Singsong-y and sweet.

[A] rhyming story of theft, mercy and enchantment illustrated with quirky good humor by Roxanna Bikadoroff.

This fun rhyming text is a great, read-aloud choice . . .

Other titles by Roxanna Bikadoroff

The Man Who Knew Everything

The Strange Life of Athanasius Kircher