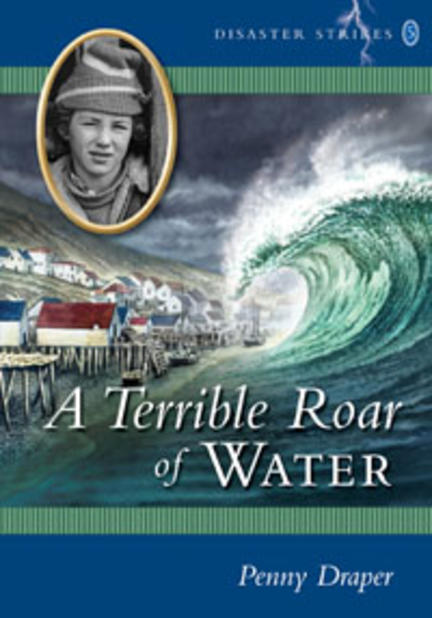 A Terrible Roar of Water is Penny Draper’s fourth book in Coteau Books’ Disaster Strikes! series. Unlike the other three authors reviewed here, Draper seems to have no direct connection to either the events that comprise her story or to ‘the Rock.’ However, the author makes the setting of her Newfoundland tale as satisfying as the smell of seafood chowder simmering on the back of the stove on a cold day. In part, A Terrible Roar of Water tells the tale of a tsunami that devastated 50 Newfoundland outports in November 1929. Although this main action doesn’t begin until page 60, readers are so sensually and emotionally embedded in 12-year-old Murphy’s life in the outport that they won’t mind.

Murphy’s father died on the day he was born and his mother moved to St. John’s to work. Although Murphy misses her and hopes to build her a house one day, he enjoys living in the outport with his aunt and uncle. He loves the sea and soon hopes to be a fisherman. Then, just as winter sets in, the terrifying tsunami does unimaginable damage to their isolated outport. Bootless and running around in his socks, Murphy helps heroically. As this engaging book concludes, readers feel optimistic that kitchen parties, mummers and all that Murphy values will be back in his life soon. Draper has done a fabulous job of carving her time and place out of the sources she talks about in her “Author’s Note” and “Acknowledgements.”

When 12-year-old Murphy reaches the harbour one cold day in 1929, he sees that the water’s been sucked right out of it! Recalling the old-timer’s warning, he must alert his family and friends that a tsunami is on the way. But can a young boy do a man’s work? Can he save his aunt and cousins? Can he save himself? Book Five in the series.