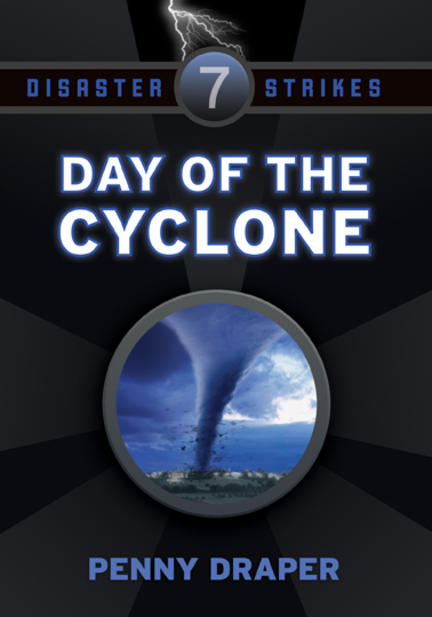 Ella is surprised by her birthday gift from her father: a Brownie camera and the advice to seek pictures of things that ‘don’t belong’. This is how Ella first notices Billy, a boy at her school. They become good friends, although Ella is sure Billy is keeping something from her.Ella soon realizes there are others to whom the ‘don’t belong’ tag applies. They include herself! Helping out at her mother’s IODE group, Ella finds out about women’s rights – or the lack of them. When Ella’s mother’s purse is raided, suspicion falls on Billy. Then, just as Ella is learning more about both her mother and her mysterious friend, the cyclone arrives, and it’s the substandard housing of the poor that’s worst-hit. How can Ella, armed only with her camera, help her friend?Praise for Ice Storm: “Draper covers the terror and impact of the storm. She also weaves in a subtle environmental message about overreliance on electricity…an unusual story of survival.” – Kirkus ReviewsPraise for Graveyard of the Sea: “the author makes the setting of her Newfoundland tale as satisfying as the smell of seafood chowder”; “readers are…sensually and emotionally embedded in 12-year-old Murphy’s life in the outport” – Canadian Children’s Book News

Day of the Cyclone is the seventh novel in the entertaining and educational Disaster Strikes series, an historical series intended for ages 8–12. It places young protagonists in the midst of disasters that have occurred in various parts of Canada. Author Penny Draper is a bookseller and storyteller from Victoria, BC. The disaster in Day of the Cyclone is the tornado that struck Regina on June 30, 1912, the deadliest tornado in Canadian history. More than 2500 people were left homeless by the tornado, which is usually classed as an F4. Twenty-eight people died, more than 200 were injured, and about 500 buildings were destroyed. Draper’s main characters are fictional, but many actual people are mentioned, and incidents of the tornado are skilfully worked into the narrative. The main character is Ella Barclay, the only child of a well-to-do banker and his wife. Ella is bored with her life and feels constrained by her mother’s high standards of what is appropriate behaviour and dress for a young girl. As the story begins, she celebrates her thirteenth birthday and her best present is a Brownie camera, which she immediately starts to use. When she snaps a photo of a new student at school, Billy Forsythe, her life begins to change in an exciting way. Billy had immigrated to Canada as a “Barnardo orphan” but, abused and overworked at the farm he was sent to, he has run away and recently wound up in Regina, where he is befriended by another down-on-his-luck immigrant named Jock. At school Billy is at first shunned, then bullied, but before long becomes Ella’s friend, until her parents order her to stay away from him and accuse him of being a thief. However, when the tornado hits — while the schoolchildren are picnicking at Wascana Lake — some rules have to be ignored. Besides specific details of the devastation caused by the tornado, Draper manages to include geographical information about the Saskatchewan prairie and historical facts and people such as Nellie McClung and the Barnardo orphans, and an explanation of Remittance Men. Details of clothing will intrigue young readers, especially the girls’ swimming costume – a navy blue, short- sleeved top with a sailor collar, puffy bloomers, and long, black swimming stockings. Themes include an emphasis on loyalty, honesty, hard work, and volunteerism. The way people come together in an emergency is clearly emphasized, as is the eventual conclusion that it is not one’s past but one’s future that is important. Ella gradually realizes that people are not always what they seem to be, including her own parents. I highly recommend this book for young readers. It seems appropriate that it is published on the 100th anniversary of the tornado, and notes at the end include additional factual information about the event. Those who enjoy it might want to check out previous books in the series, six of which were written by Penny Draper. All the stories are stand-alone novels, and most of them have been nominated for or won various awards.

Penny Draper has the voice of a storyteller, and like all good stories, Day of the Cyclone cries to be read out loud. Not only do the voices of the characters ring true, but the voice of the narrator also clearly rings through.Set against the backdrop of Regina’s 1912 “cyclone,” which was actually a tornado, this book is part of the Coteau Books for Kids’ Disaster Strikes! series.The story revolves around young Ella Barclay, daughter of the local banker, and Billy Forsythe, a mysterious boy she meets, who is newly arrived in the city. Their initial encounter goes badly, and their misunderstandings continue at length. This is compounded by the fact that Billy has something to hide, and Ella’s parents do not approve of the newcomer they view as lower class.The book is a mix of fact and fiction, and Draper masterfully weaves the two together. She has done her research well, and carefully crafts the facts into a compelling creative narrative. For example, in addition to creating fictional characters, she uses the names of actual people and incorporates into her narrative the true story of the little white dog that stayed with its dead master until he was buried. Draper incorporates archival photos into the story by having Ella use her new Brownie camera, a present for her 13th birthday, to record the destruction.Draper uses the story as a teaching tool, bringing in elements of suffragettes, ethnic minorities, and discrimination, while entertaining in the process. What a delightful way to learn!

February 23rd Reviewed by Kate WatsonDisaster Strikes! Day of the CyclonePenny DraperPenny Draper’s latest instalment in the highly entertaining and educational Disaster Strikes! series tells the story of the deadliest tornado in Canadian history, which killed 28 people and left more than 2,500 homeless when it swept through Regina on June 30, 1912.The book’s heroine is 12-year-old Ella Barclay, the privileged daughter of a banker. Ella is spirited and curious, often chafing at the confines of her social status. With the gift of a Kodak Brownie camera, she is afforded more freedom to explore her city and encouraged to see the world in a different way. Archival photographs – ostensibly snapped by Ella – are peppered throughout the novel, providing readers with a sense of historical Regina before and after the tornado, and adding a nice graphic element to the narrative. The chapters describing the tornado (which doesn’t hit until midway through the book) and its after-effects are thrilling, terrifying, and often heartbreaking. But to bill the book as a simple disaster story is to sell it short. Ella is an engaging character whose guilelessness is an effective means of teaching readers about issue of the time. Draper cleverly uses the girl’s relationships to highlight the burgeoning push by women for social reform and the right to vote, as well as the role of British Home Children in the settlement of Canada’s West. Ella’s growing awareness of class disparity and poverty is also woven expertly throughout the story.Draper’s exciting coming-of-age story, featuring a relatable protagonist and set against the backdrop of an historic moment in danger of fading from consciousness, strikes the perfect balance between enthralling and informative.

1912: Ella, 12-years-old, is living in Regina, SK, and struggling to deal with her mother's rules for a proper young lady. For Ella's birthday, her father surprises her with the gift of a Brownie camera and tells her that, for a good picture, she should look for the things that "don't belong." Following his instructions leads Ella to learn more about Billy, the new boy at school. It also leads her to explore parts of the city she has never been before, including the poorer areas, and to meet people from different walks of life.When a thief steals money from Ella's mother's purse and then from the bank where her father works, suspicion falls on Ella's friend, Billy. Ella is determined to prove his innocence, despite his rough background. In the midst of all of this, a tornado hits Regina, throwing the entire city into upheaval. Penny Draper's blending of historical events, social issues, and the idea that appearances are not always what they seem is well done throughout the book. Modern girls will identify with Ella's feelings of constriction with women's 'household role,' and this story serves as an excellent introduction to the very real social issues of women's rights, racism, and immigration as they existed in 1912. While the story is mostly told from Ella's viewpoint, Billy's side of the story and the vivid descriptions of the cyclone and its aftermath will keep this book interesting for boys as well. Ella's camera is well-used as a plot device for Ella to seek out new scenes and people, and its use rarely feels artificial. Draper's use of real archival photographs throughout the book as part of the story adds to the book, particularly in revealing the impact of the cyclone on Regina. Draper's afterword is concise and quickly separates out the fact from the fiction for those who want to know what really happened during the cyclone. The "Disaster Strikes!" series is based around the theme of real Canadian disasters. While this novel is technically part of this series, each book is a stand-alone novel in its own right.Highly Recommended.

Terrible Roar of Water, A