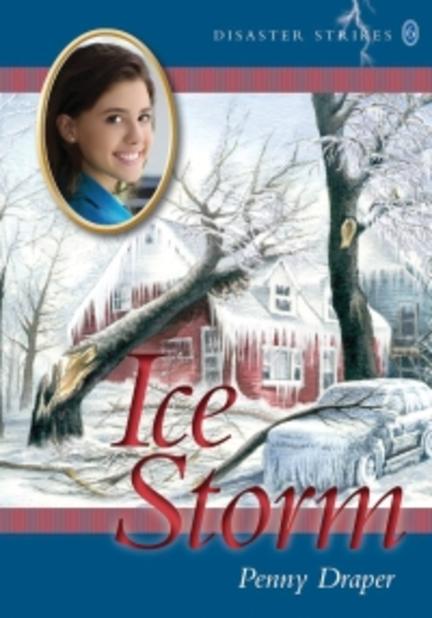 The deadly ice storm which struck Eastern Canada and the US in January of 1998 has a drastic effect on the lives of two 12yearold cousins, one a figureskating "princess" from Montreal, and the other her downtoearth farmgirl cousin.

Alice and Sophie are 12-year-old cousins. Alice is a competitive figure skater in Montreal, devoting hours each day to her sport. Tall, dark and graceful, she is superb in practice but performs badly in competitions due to nerves. Short, blonde Sophie lives on a dairy farm in Saint-Hyacinthe. She loves everything about farm life though she is impatient with her bright but eccentric younger brother. As freezing rain begins to fall, neither girl realizes that this is the beginning of eight long days that will challenge them extraordinarily and change their views of themselves.

In her sixth Disaster Strikes novel, author Penny Draper presents a disaster that develops slowly. The Ice Storm that hit Quebec and eastern Ontario in January 1998 cut off power to over three mil- lion people as, over several days, power lines and pylons buckled under the weight of ice centimetres thick. Farm animals died when the barns could not be ventilated; a quarter of the trees tapped for maple syrup were destroyed. Over 7,000 troops were called in, and over 100,000 people were evacuated to shelters.

As the storm progresses, Alice — on her own because her widowed father is working on the power lines — rescues an elderly neighbour and the two are evacuated to a shelter. Sophie, along with her family, struggles to keep the cows alive and healthy — a challenge when they have access to a generator and nearly impossible when the generator fails.

Draper keeps us always engaged with these resourceful young girls and gripped by the growing devastation around them. Real and intriguing details are woven into the story, and she includes Ice Storm facts and trivia in an addendum. Ice Storm is an excellent addition to the Disaster Strikes series.

Alice and Sophie are cousins and best friends but couldn’t be more different. On January 5, 1998, freezing rain begins to fall in the province of Quebec, taking down power lines and trees and leaving homes without heat or electricity. While Alice faces the storm alone, Sophie must help her family keep their dairy herd alive and the girls must think and act as they never have before. Book Six in the series.

Terrible Roar of Water, A