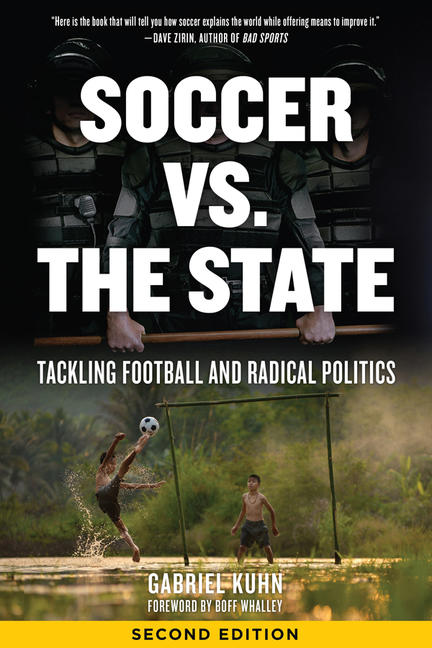 Soccer has turned into a multi-billion-dollar industry. Professionalism and commercialization dominate its global image. Yet the game retains a rebellious side, maybe more so than any other sport co-opted by money makers and corrupt politicians. From its roots in working-class England to political protests by players and fans, and a current radical soccer underground, the notion of football as the “people’s game” has been kept alive by numerous individuals, teams, and communities.

This book not only traces this history, but also reflects on common criticisms: soccer ferments nationalism, serves right-wing powers, and fosters competitiveness. Acknowledging these concerns, alternative perspectives on the game are explored, down to practical examples of egalitarian DIY soccer!

Soccer vs. the State serves both as an orientation for the politically conscious football supporter and as an inspiration for those who try to pursue the love of the game away from televisions and big stadiums, bringing it to back alleys and muddy pastures.

This second edition has been expanded to cover events of recent years, including the involvement of soccer fans in the Middle Eastern uprisings of 2011–2013, the FIFA scandal of 2015, and the 2017 strike by the Danish women’s team.

Gabriel Kuhn is an Austrian-born writer and translator living in Sweden. He is a former semiprofessional soccer player and has been active in social movements since the late 1980s. Among his book publications are Playing as If the World Mattered: An Illustrated History of Activism in Sports (2015) and Antifascism, Sports, Sobriety: Forging a Militant Working-Class Culture (2017).

Boff Whalley is an English musician, writer, and athlete, who is perhaps best known for being the former lead guitarist for the anarcho-punk and folk band Chumbawamba. He is now a playwright and the founder of Commoners Choir, who released their first album in 2017.

Other titles by Boff Whalley