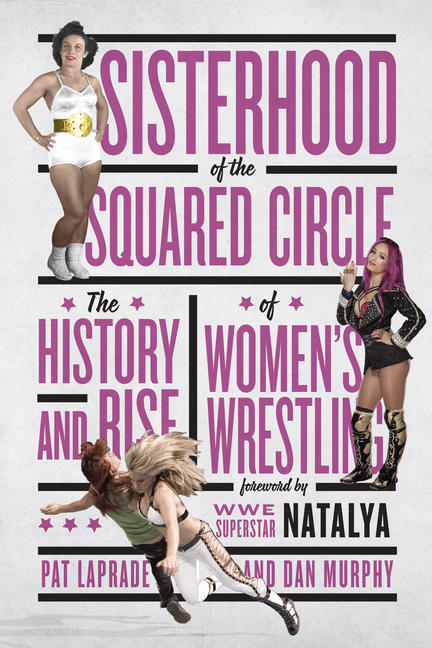 A behind-the-scenes look at over a century of female wrestling, with profiles and photos, documenting the rise of women’s wrestling from sideshow to WWE main event

“Sisterhood of the Squared Circle is absolutely a must read for most fans . . .” Wrestle Book Review

From the carnival circuit of the late 1800s to today’s main events, this book offers a look at the business of women’s wrestling with its backstage politics, real-life grudges, and incredible personalities. With more than one hundred profiles, you’ll learn about the careers of many well-known trailblazers and stars of today, including Mildred Burke, the Fabulous Moolah, Mae Young, Penny Banner, Wendi Richter, Trish Stratus, Chyna, Lita, Charlotte, Sasha Banks, and Bayley.

With rare photographs and an exploration of women’s wrestling worldwide — including chapters on Japan, Mexico, England, and Australia — Sisterhood of the Squared Circle is a priceless contribution to the history of professional wrestling.

Dan Murphy is a cartoonist and writer. For 29 years, he produced political cartoons, editorials, and the Sunday illustrated column Mr. Pundit for The Province newspaper. Thoughtful, satirical, and laugh out loud funny, this is the book Murphy was born to write. Murphy is a Western Magazine Award winner and his work has appeared in Maclean’s, Condé Nast Traveller, Omni, Penthouse, and Surfer.

“I remember years ago I was at the Cauliflower Alley Club and Paul Boesch pointed out Clara Mortensen to me, saying she was the world champion of women’s wrestling before Mildred Burke. At that time, most people didn’t know there was women’s wrestling before Moolah. Boesch told me about names that almost nobody knew or remembered. Pat Laprade and Dan Murphy, in their book, change all that, as they tell the story of how women’s wrestling was born, grew, changed, and had its ups and downs all over the world. Sisterhood of the Squared Circle tells you about the stars of today who you may know and the stars who built the sport but are mostly unknown to modern fans.” — Dave Meltzer, Wrestling Observer

“Laprade and Murphy, both veteran wrestling journalists, do an excellent job guiding readers chronologically through the ups and downs of women’s wrestling … Fascinating sports history.” — Booklist

“A concise, yet encyclopedic compendium of the past, present, and future of women’s wrestling, Sisterhood of the Squared Circle is an essential addition to the home libraries of astute wrestling aficionados. We give it 4.5 out of five suplexes.” — Pro Wrestling Illustrated

“Sisterhood of the Squared Circle is absolutely a must read for most fans … it is more than likely — and justifiably so — to be at or very near the top of the best wrestling books of the year … Laprade is becoming one of the top tier authors in the pro wrestling genre.” — Wrestle Book Review

“Pat Laprade and Dan Murphy’s Sisterhood of the Squared Circle is full of anecdotes and trivia from over a century of wrestling.” — National Post

Other titles by Pat Laprade

The Eighth Wonder of the World

The True Story of André the Giant

Other titles by Dan Murphy

The Legend of the Christmas Witch