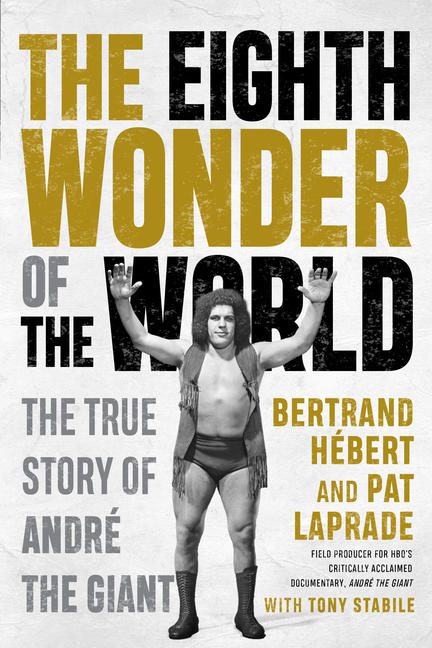 From field producer for HBO’s André the Giant Pat Laprade and renowned wrestling historian Bertrand Hébert comes a definitive and exhaustive biography of André the Giant … now in paperback!

Is there a way to find truth in the stuff of legend? You may think you know André the Giant — but who was André Roussimoff? Through exhaustive research and exclusive interviews with family and friends, The Eighth Wonder of the World offers a comprehensive exploration of André’s amazing wrestling career and the indelible mark he left on pop culture, including his role in the cult classic film The Princess Bride.

Born in France, André worked on his family’s farm until he was 18, when he moved to Paris to pursue professional wrestling. A truly extraordinary figure, André went on to become an international icon and world traveler, all while battling acromegaly. While his disorder is what made him a giant and a household name, it’s also what caused his untimely death at 46.

This biography addresses the burning questions, outrageous stories and common misconceptions about his height, his weight, his drawing power as a superstar, and his seemingly unparalleled capacity for food and alcohol. Transporting readers beyond the smoke and mirrors of professional wrestling into the life of a real man, Laprade and Hébert have crafted the most complete portrait of a modern-day mythical being.

Bertrand Hébert co-wrote Pat Patterson’s autobiography, Accepted. He lives in Beauharnois, Quebec. He also co-wrote Wrestling Observer Newsletter’s 2013 book of the year, Mad Dogs, Midgets and Screw Jobs with Pat Laprade. Laprade is the co-author of Sisterhood of the Squared Circle, created the Quebec wrestling Hall of Fame, and lives in Montreal.

Excerpt: The Eighth Wonder of the World: The True Story of André the Giant (by (author) Bertrand Hébert & Pat Laprade; with Tony Stabile)

André the Giant is challenging Hulk Hogan for the World Wrestling Federation title. 93,173 people are crammed together near the corner of Michigan Highway and Opdyke Road, in a town of 70,000, 30 miles North West of Detroit, to witness one of the biggest pro wrestling matches of all-time. Not only for the record-crowd size but for what the match represents, the home of the National Football League’s Detroit Lions and the National Basketball Association’s Detroit Pistons, the Pontiac Silverdome, is the place to be. Much like André, it’s the largest of its kind and a great fit for a match like this.

André versus Hogan is the perfect match on the perfect stage. The challenger, from Grenoble in the French Alps, stands 7 foot and 4 inches tall, weighing 520 pounds. The champion, from Venice Beach, California, is 6 foot 6 and 302 pounds. Both are undefeated and facing each other for the very first time. Will Hogan be able to slam the Giant, let alone beat him? Will the Giant end Hogan’s 39-month title reign? Every question is going to be answered at WrestleMania, the showcase of the immortals, the third such event organized by Vincent Kennedy McMahon, but the first to bring the company to this world-wide phenomenon level. WrestleMania III’s slogan “Bigger, Better, Badder” suits to a T.

Ever since arriving in North America, André had been the biggest attraction in pro wrestling. In almost every interview, readers and viewers have heard that André came from France in the early 70s, and after a brief stint in Canada went on to rule the wrestling world, managed by the biggest impresario in the sport, Vincent James McMahon: André was his vision.

A decade later, when McMahon’s son took over the company, he chose Hulk Hogan as the new future future of the business and, as the company’s history goes, André and Hogan were best friends. André was even part of the celebration when Hogan defeated The Iron Sheik for the WWF World Heavyweight championship at Madison Square Garden in 1984--he famously poured champagne on Hogan’s head.

Since becoming champion, Hogan had defended the title against almost every bad guy in the promotion: Rowdy Roddy Piper, Paul Orndorff, Big John Studd, King Kong Bundy, Jesse Ventura… the list goes on and on and on. A couple of times a year, Hulk and André would team to face adversity that one man alone could not overcome. André, it seems, was too much of a novelty to be considered for a championship match, and seven different wrestlers had won the crown jewel since he started working for McMahon. Hogan was simply the latest to jump ahead of him.

And this is what tonight is about: André being overshadowed by Hogan, not getting the respect he deserves. Fans in the Silverdome had already seen so much. Pretty boys Rick Martel and Tom Zenk opened Wrestlemania III showing real fire; Brutus Beefcake was evicted from the Dream Team, replaced by Dino Bravo; Ricky Steamboat defeated Randy Savage in a match no one will ever forget; and Jim Duggan and Nicolai Volkoff just had their own version of the Cold War. Even Edouard Carpentier, André’s old friend from France is providing commentary in French.

The building is rumbling as Mr. Baseball Bob Uecker introduces Entertainment Tonight’s Mary Hart as the guest timekeeper. With former enemy Bobby “The Brain” Heenan by his side, André comes down the very long alley between the backstage area and the ring to a chorus of boos on a motorized cart made to look like a miniature ring. He remains stonily indifferent to the debris thrown at him and once again enters his battlefield by stepping over the top rope. This is the pinnacle of his career. Backstage, Hogan is nervous.

“What if André goes into business for himself? What if he decides he’s winning tonight?”

If that were the case, there’s nothing the Hulkster could do.

Hogan’s “Real American” entrance music finally hits. In better shape, he walks from the curtain to the ring, cheared on by the thousands of Hulkamaniacs in attendance.

The tension is real. The two biggest stars of the last decade are in the middle of the ring, and everybody in attendance or watching on closed-circuit TV around the world are on the edge of their seats. After just a few seconds, Hogan tries to slam the Giant, something that no one has ever been able to do. But he’s denied by André, who covers the champion for a two-and-three-quarter count by referee Joey Marella. After taking the beating of a lifetime, Hogan comes back from the dead, slams André and hits the leg drop for the one, two, three.

Not only did Hogan win the match and keep his title, but he also dealt André his very first defeat.

“The Hogan-André match at WrestleMania III and the Bret-Shawn match in Montreal in 1997 are the two most important matches in the history of modern wrestling,” argues journalist and founder of the Wrestling Observer Newsletter, Dave Meltzer.

Yet, this match and everything surrounding it is the culmination of every myth and legend you ever heard about André coming to a head, on the biggest stage he ever performed on.

André wasn’t 7 foot 4 inches tall, at any point in his life. He didn’t weigh 520 pounds. And he wasn’t from Grenoble or even the French Alps. This was not André and Hogan’s first match and André was lifted off his feet way before Hogan even stepped foot in a ring for the first time. Montreal was more important to his career than any other biography written or filmed has ever shown. Even the number of people in attendance that night in Pontiac was exaggerated.

However, one thing was true: the magnitude of that encounter was undeniable. Depending on age and knowledge of pro wrestling at the time, fans either loved it or thought it was a poor performance. Yet, everyone agrees that the influence it had on the future of the WWF is immeasurable. André’s health was declining and it was the right time to officially pass the torch, even if Hulk had already been in the driver seat for a while. André knew this match would make him a legend beyond his time. In a business where timing is everything, that feud opened the door to so many great things to come for the WWF, especially when everyone involved in wrestling was trying to come up with the next big idea in the ever-expanding beginning of the PPV era. The André and Hogan feud was, in fact, an important piece of what would come next—so much so that people may still not even realize.

In 1987, the biggest lie about André wasn't his height or his undefeated record. It was the fact that he had lost so much strength he had trouble catching a teenage actress in a movie. Even if photographs showing he could easily lift five women at the same time had made him a living mythical being, acromegaly, the ailment that had made him a superstar known around the world, was catching up to him. The body that made him famous was betraying him slowly and in pernicious ways every single day. Condemned to be André the Giant 24 hours a day, seven days a week, he was likely depressed. Sad, at very least, that he couldn't go anywhere without being looked at, touched, or pointed at. He was 40 years old and he knew that point he wouldn't see 50.

From Paris to Montreal, from Tokyo to New York City, he transcended the world of professional wrestling. The Seven Wonders of the World, like the Pyramid of Giza or the Colossus of Rhodes always had something mysterious about them, something mythical, a part of some legend or fairy-tale. André’s real life and true career were the same, filled with myths and overshadowed by his larger-than-life character and personality.

On March 29, 1987, André probably wasn’t the better, or even the badder, but he was definitely the bigger. Much like WrestleMania today, André René Roussimoff was at one point the greatest spectacle in sports entertainment.

He was, in fact, the Eighth Wonder of The World…

“The Eighth Wonder of the World: The True Story of André the Giant is a must-read for any and all with even a fleeting interest in the wrestling business or the mesmeric André … It’s brimming with information and stories that even the most ardent of wrestling fans will be completely unaware of.” — WhatCulture

“Laprade and Hébert have astutely balanced information and entertainment, leaving us with a page-turner when we need it most. There’s no better way for wrestling fans to get through social distancing than by reading The Eighth Wonder of the World: The True Story of André the Giant. When we compile the list of 20 Best Wrestling Books of the Next 20 Years, this André the Giant book is going on top.” — The Wrestling Estate

“This is a superbly researched piece of work that tries to [unpack] truth amongst the legends. In the world of pro wrestling this is a particularly hard task and Bertrand Hébert and Pat Laprade should be commended for managing to do so while still providing a heartfelt tribute to a man who was larger than life — in all senses of the [word].” — Tripwire

“Unlike traditional biographies, we don’t just get a chronological recollection of André’s life, but we also get a fascinating array of discussions that range from his aforementioned and apparently famous flatulence to the curiosity surrounding the size of André’s genitalia to his lust for life and the ladies and even an entire chapter on acromegaly, the hormonal disorder responsible for André’s immense size.” — Slam! Wrestling

Other titles by Bertrand Hébert

The Untold Story of how Montreal Shaped the World of Wrestling

Other titles by Pat Laprade

Sisterhood of the Squared Circle

The History and Rise of Women’s Wrestling