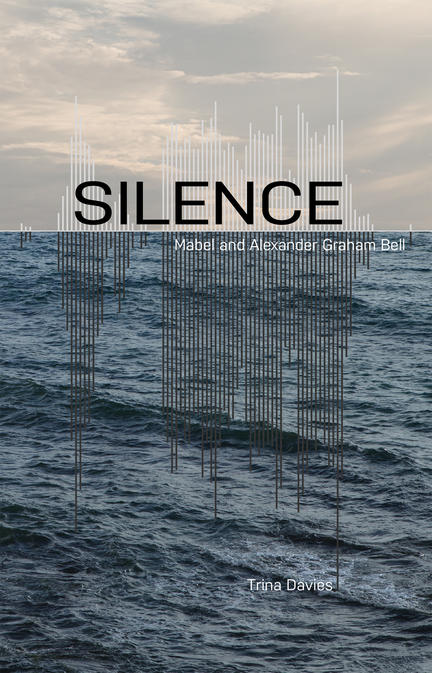 It only takes one spark of love to change the world forever.

Mabel Hubbard Bell was a strong, self-assured woman—bright, passionate, and a complete original. Despite a near-fatal case of childhood scarlet fever that cost her the ability to hear, she learned to talk and lip-read in multiple languages. At nineteen, she married a young inventor named Alexander Graham Bell and became the most significant influence in his life.

This is Mabel's story, offering the unique perspective of a woman whose remarkable life was forever connected to her famous, distracted husband. From inspiring invention to promoting public service, Mabel and Alec challenged each other to become strong forces for good. Silence is a beautiful and true love story about how we communicate.

Trina Davies is a playwright based in Vancouver, BC, Canada. Trina’s award-winning plays include Shatter, Multi User Dungeon, The Auction, The Bone Bridge, and Waxworks. Her play The Romeo Initiative was a finalist for Canada’s top literary prize, the Governor General’s Literary Award for Drama in 2012 and was the winner of the National Enbridge Prize for Established Artist. Her plays have been performed across Canada and in a number of other countries including the United States, Germany, Italy, and India. Her work has been translated into Italian and German. She has participated in artist residencies at the Stratford Festival in Ontario, the Banff Centre for the Arts, the Playwrights Theatre Centre, and the Bella Vita Playwrights Retreat in Italy. She is currently working towards the world premieres of her plays Waxworks and Ambrose Small: An Extravagantly Musical, Mysteriously Grand Ghost Story (The Grand Theatre, 2020). She is also working on The Bone Bridge, recent winner of the Woodward International Playwriting Prize, which had its academic premiere at the University of New Hampshire in October 2017. Trina is a member of the Alberta Playwrights Network and the Playwrights Guild of Canada.

Peter Hinton-Davis is a stage director, playwright, and teacher. Recent credits include Missing by Marie Clements and Brian Current (Pacific Opera), Sex by Mae West, An Octoroon by Branden Jacobs-Jenkins (Shaw Festival), Hadrian by Rufus Wainwright and Daniel MacIvor (Canadian Opera Company), Bombay Black by Anosh Irani (Factory Theatre), and Silence by Trina Davies (Grand Theatre London/National Arts Centre). From 2005 to 2012, Peter was Artistic Director of English Theatre at Canada’s National Arts Centre. Previously, he was Associate Artist at the Stratford Festival, Dramaturg at Playwrights’ Workshop Montréal, and Associate Artistic Director at Canadian Stage. Peter has taught at the National Theatre School, Ryerson University, and the University of Alberta. From 2012 to 2020, Peter taught the M.F.A. seminar in stage direction at York University. In 2009, Peter was made an Officer of the Order of Canada.

“[A] poetic meditation on communication in general and the place of human beings in the world . . . such a beautiful, thoughtful play.”

“A welcome addition to the catalogue of Canadian theatre . . . a lovely portrait of a unique relationship and a delightfully entertaining, interesting and challenging show.”

“If one of the intents of theatre—of any art, for that matter—is to give us entry into worlds we’d otherwise never inhabit, Silence: Mabel and Alexander Graham Bell succeeds splendidly.”

“A flawless interpretation of Mabel’s mind . . . you are within it, listening, watching, and feeling the vibrations of sound waves around you.”

Other titles by Trina Davies