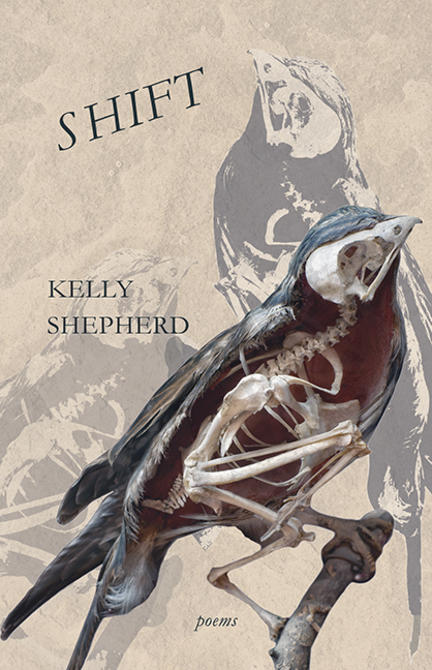 These poems are filled with awe and celebration, sadness, and ironic humour as Shepherd explores the themes of human relationships with the natural world including connection, alienation, and the negative impacts of human activity on nature; interspecies kinship – ecological as well as animistic and shamanic; and intersections of ecology and industry.

Shepherd uses numerous voices and perspectives, and such arrangements bring about a variety of moods. Whether his subjects are starlings or tamaracks, woodchucks or grizzly bears, the ever-present magic of nature guides not only the mode but directs each poem’s tone toward some unique perspective:

Some spiders know the correct use of magic
knots to tie a cluster of Oregon grape
into one single dusty purple berry. If a

black bear swallows it under the right moon
he or she will become a powerful shaman,
able to speak the languages of spiders.

But while there is a dominance of the natural world found in the poems, they also reflect the numerous meanings of the title: a shift of perspective or point of view, physically moving or shifting position, transforming or changing form or physical appearance, shifting gears while driving a vehicle, working the night shift, and so on. The book's title is also taken from the title of one specific poem in the collection that encapsulates some of these central ideas.

Living and working on the land and bodily experiences of specific places also have their place in Shepherd’s poems. These portraits ensure a kind of visceral connection or memory to the poems as they invite reader comparisons to their own work experiences:

Your job is to take the cement –
grey-green, ugly, utilitarian, dusty and not just dusty but
poisonous, abrasive, blocky, sharp-edged, impossibly heavy
and dangerous in slings from overheard lifts –
and transform it into something else.

Pull off the present disk,
fingers fat with heavy rubber gloves,
and whack the grinder wheel’s Velcro pad
down onto the next one waiting;

Shift is a collection of poems that leave an indelible mark that we humans are interconnected and that we are intrinsically bound to the natural world. They are poems that champion the beauty and resilience of nature and remind us that we need to protect our relationships with it.

Kelly Shepherd is an active writer and performer. He has been part of numerous poetry reading events including creative collaborations with other writers, musicians, and visual artists; has had participation in The Rasp and the Wine reading series in Edmonton, the Spoken Word on the Move series in Kelowna, and the Raving Poets series in Edmonton.He has been a kindergarten teacher in South Korea and a construction worker in northern Alberta. He has a Religious Studies MA from the University of Alberta, with a thesis on sacred geography, and an MFA in Creative Writing from UBC Okanagan. He has written five poetry chapbooks: The First Metaphor (2014), Fort McMurray Tricksters (2014), if one petal falls (2012), the bony world (2010), and Circumambulations (2003); his writing has been published in numerous journals including The Goose, The Coastal Spectator, Lemon Hound, and Geist. He is also a poetry editor for the environmental philosophy journal The Trumpeter. Originally from Smithers, British Columbia, Kelly currently lives and teaches in Edmonton.

There was no time to take cameras
out of their bags, so everyone
saw it but there was no evidence

later. After the trucks pulled over
at the trailhead, but before most
of us had stepped out onto the gravel

logging road, a cow moose ran past
wheezing and flecked with sweat.
Her calf, less than a year old, galloped

close behind. A hockey stick’s length
from the truck, someone said. After
the calf came a light brown grizzly bear,

also winded but running steadily. In
the dim spruce silence we could hear all
three of them breathing. It might be

a stretch to say the bear looked
confident but it seemed clear that the
end was near for the moose. The calf

would be the bear’s obvious target
and the cow would die before she’d
let that happen. No time, no time

Other titles by Kelly Shepherd