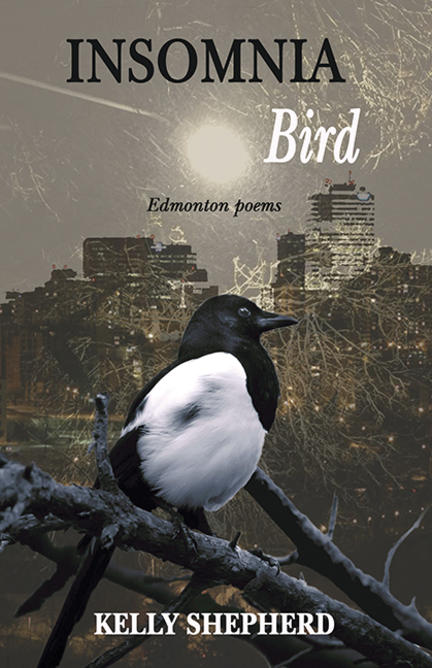 The poems in Kelly Shepherd’s Insomniac Bird are a cartography and a geography of Edmonton. The poems which shift between short, individual lyric pieces and found text emulate a black-billed magpie’s nest with the subject-matter and also physically, with the words and lines. The poems generate the theme of home (the bird’s nest, the city), and not feeling at home; sleeping, and the inability to sleep. The magpie (the insomnia bird) is the protagonist and the muse, the thread that connects everything to everything else in this work.

As such, Shepherd’s poems move across the surface at speed, like Edmonton’s NAIT train, and dive like magpies after the occasional tasty image or crumb of detail. The city as it spreads out across the Prairies, can do nothing to prevent urban sprawl, and grows taller with each new highrise building and office tower and sinks deeper into the ground, which is memory!

The city with purple fingers and black feathers
is bending branches outside the window.
In the photosensitivity of morning,
The city is an open window that can’t hear itself think.

While Shepherd’s poems are at times critical of Edmonton’s automobile culture and urban sprawl, his tone remains ironic rather than moralizing and he is consistent in his use of dark humour to avoid being didactic. With such guidance the poems effectively disclose what is not seen, what is repressed, what lies behind the scenes in the city he shares with magpies.

Kelly Shepherd is an active writer and performer. He has been part of numerous poetry reading events including creative collaborations with other writers, musicians, and visual artists; has had participation in The Rasp and the Wine reading series in Edmonton, the Spoken Word on the Move series in Kelowna, and the Raving Poets series in Edmonton.He has been a kindergarten teacher in South Korea and a construction worker in northern Alberta. He has a Religious Studies MA from the University of Alberta, with a thesis on sacred geography, and an MFA in Creative Writing from UBC Okanagan. He has written five poetry chapbooks: The First Metaphor (2014), Fort McMurray Tricksters (2014), if one petal falls (2012), the bony world (2010), and Circumambulations (2003); his writing has been published in numerous journals including The Goose, The Coastal Spectator, Lemon Hound, and Geist. He is also a poetry editor for the environmental philosophy journal The Trumpeter. Originally from Smithers, British Columbia, Kelly currently lives and teaches in Edmonton.

Other titles by Kelly Shepherd