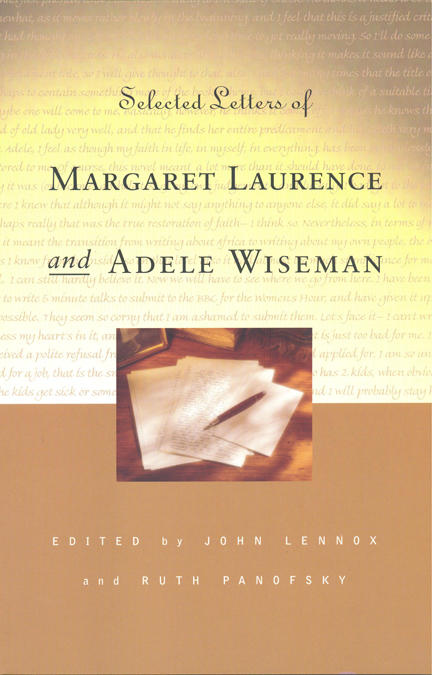 Over a period of forty years, from 1947 to 1986, Margaret Laurence and Adele Wiseman wrote to each other constantly. The topics they wrote about were as wide-ranging as their interests and experiences, and their correspondence encompassed many of the varied events of their lives. Laurence's letters - of which far more are extant than Wisman's - reveal much about the impact of her years in Africa, motherhood, her anxieties and insecurities, and her developement as a writer. Wiseman, whose literary success came early in her career, provided a sympathetic ear and constant encouragement to Laurence.

The editors' selection has been directed by an interest in these women as friends and writers. Their experiences in the publishing world offer an engaging perspective on literary apprenticeship, rejection, and success. The letters reveal the important roles both women played in the buoyant cultural nationalism of the 1960s and 1970s.

This valuable collection of previously unpublished primary material will be essential to scholars working on Canadian literature and of great interest to the general reading. The introduction contextualizes the correspondence and the annotations to the letters help to clarify the text. The Laurence-Wiseman letters offer a fascinating glimpse into the lives and friendship of two remarkable women whose personal correspondence was written with verve, compassion, and wit.

John Lennox is Professor of English, York University, and a specialist in Canadian Literature. In 2000 he was awarded the Governor-General's International Award in Canadian Studies, which is given annually for outstanding service to scholarship and to the development of Canadian Studies internationally.

Ruth Panofsky is an award-winning poet who lives and writes in Toronto, where she teaches Canadian Literature and Culture at Ryerson University. She is the author of The Force of Vocation: The Literary Career of Adele Wiseman (2006) and The Literary Legacy of the Macmillan Company of Canada: Making Books and Mapping Culture (2012). Her award-winning critical edition of the collected poetry of Miriam Waddington appeared in two volumes in 2014 and, most recently, she edited The Spice Box: Canadian Jewish Writing (2017). Her newest work, Toronto Trailblazers: Women in Canadian Publishing, which focuses on key twentieth-century publishers, editors, and literary agents, was published in 2019. She is also an award-winning poet. She received the Helen and Stan Vine Canadian Jewish Book Award for Laike and Nahum: A Poem in Two Voices (2007). Radiant Shards: Hoda's North End Poems, her third volume of verse, received a Hadassah-Brandeis Institute Research Award.

'The extraordinary and moving thing about these letters is their openness ... It was a remarkable friendship and this correspondence is a tribute to the two women, to their capacity for affection and empathy and to their sheer guts.'

Other titles by John Lennox

The Correspondence of William Arthur Deacon

Other titles by Ruth Panofsky

Cultural Mapping and the Digital Sphere

The Collected Poems of Miriam Waddington

The Literary Legacy of the Macmillan Company of Canada

At Odds in the World

A Poem in Two Voices

The Force of Vocation

The Literary Career of Adele Wiseman