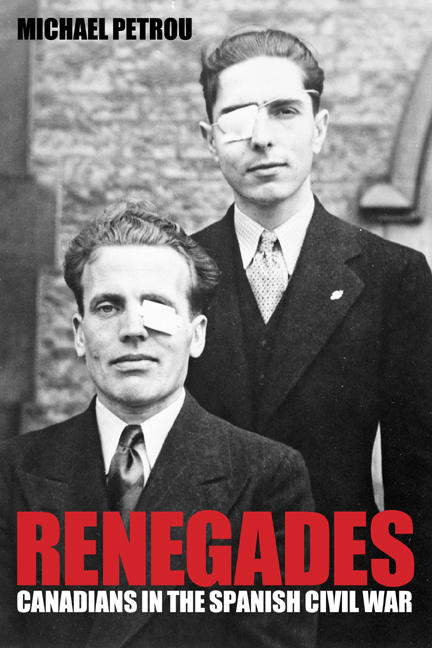 Between 1936 and 1939, almost 1,700 Canadians defied their government and volunteered to fight in the Spanish Civil War. They left behind punishing lives in Canadian relief camps, mines, and urban flophouses to confront fascism in a country few knew much about. Michael Petrou has drawn on recently declassified archival material, interviewed surviving Canadian veterans, and visited the battlefields of Spain to write the definitive account of Canadians in the Spanish Civil War. Renegades is an intimate and unflinching story of idealism and courage, duplicity and defeat.

Michael Petrou, an award-winning senior writer at Maclean's, has covered wars and conflicts across Africa, the Middle East, and Central Asia. He is the author of Renegades: Canadians in the Spanish Civil War, and holds a doctorate in modern history from the University of Oxford. Petrou lives in Ottawa.

Michael Petrou’s Renegades isn't the first account of the Canadians who fought in Spain’s uncivil war, but it does feel like we now have the whole story in hand – as much of it, anyway, as we're ever going to see emerge from the fog of that war. Painstaking and clear-eyed, what lends it heft is the volume and rigour of the research that Petrou, a senior writer at Maclean’s, has marshalled. There’s a good deal that's new, too, thanks to Petrou’s access to the archives of Moscow’s Communist International, as well as the mining he’s done of Canadian archives, including newly declassified RCMP files.

A fascinating account of a little understood conflict, packed with information never before published ... For anyone interested in the history of Canada and the struggle between democracy and totalitarianism, Petrou’s masterful account is required reading.

You will find a painstaking account of the courageous band who chose to fight fascism before it was politically fashionable and the tough battles they fought with little training, lousy equipment and military leadership that was haphazard at best ... Adventurers, idealists, people looking for work and a cause, they deserve our respect. Petrou’s often dry, detailed account allows us to understand that they may have been renegades but they were also soldiers, not of fortune but of commitment and dreams.

All the good components of a war history are present here: statistical analysis of who the soldiers were, why they fought, and how their ideals were tested; incompetent officers sacrificing their men for the sake of appearances; and much demonstration of the absurdity of war, both in situ and in retrospect. Petrou does a fantastic job of continuously relating everything back to the why of the war, and how common wartime situations became a fight in the struggle of communism versus fascism.

Renegades is the fullest and most authoritative account yet written of Canadian volunteers in the Spanish Civil War and a valuable contribution to the history of the International Brigades. Michael Petrou draws on many new archival sources to present a vivid, rounded, and illuminating account of the almost 1,700 Canadians who served in Spain. While essentially a group biography, there are also some fascinating vignettes of individual volunteers, notably Dr Norman Bethune.

Other titles by Michael Petrou

Is This Your First War?