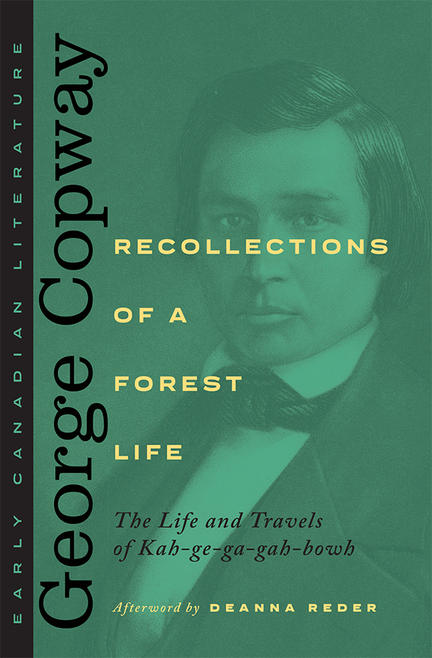 The first book published by an Indigenous author in Canada is George Copway’s Life, History, and Travels of Kah-ge-ga-gah-bowh (1847), in which he offers an autobiographical account of his life and experiences, details the changing landscape of his homeland, recounts Ojibwe customs, traditions, and history, and critiques settler society’s exploitation of Indigenous people and territory. Copway’s autobiography was incredibly successful: it went through seven editions within a year of its publication and was expanded and republished in 1850 under the title Recollections of a Forest Life.

This edition features an afterword by Deanna Reder and will compare the differences between early versions of this classic, as a way to think through discussions that are still pertinent today including: the editing history of Indigenous texts; culturally appropriate reading strategies; the influence of Indigenous epistemologies, and in this case Anishnaabe-specific worldviews; and the ways in which autobiography was and continues to be a preferred Indigenous intellectual tradition.

Also included in this volume is information about George Copway as a member of the Nineteenth Century Ojibway literary coterie, in the context of his ancestors, his peers, and the work of Anishinaabe writers today.

Born in 1818 into an Anishinaabe family in the Rice Lake area of what is now Ontario, George Copway's autobiography, The Life, History and Travels of Kah-ge-ga-gah-bowh (1847), was the first book-length work by an Indigenous author in Canada. Copway went on to author several other works, including The Traditional History and Characteristic Sketches of the Ojibway Nation (1850).

Deanna Reder, a Cree-Métis scholar, holds a joint appointment as an assistant professor in Simon Fraser University’s First Nations Studies Program and the Department of English. Her main fields of study are Indigenous literary theories and autobiography theory, with a particular focus on Cree and Métis life writing. She recently published on Edward Ahenakew in Studies in Canadian Literature.


Linda M. Morra, an associate professor at Bishop’s University, specializes in Canadian studies/literature, with a particular focus on twentieth-century Canadian writers. Her publications include a book on the letters of Emily Carr and Ira Dilworth (Corresponding Influence, 2006), an anthology about Marshall McLuhan (At the Speed of Light There Is Only Illumination, 2004), and essays about Tomson Highway, Jack Hodgins, and Mordecai Richler.

Other titles by George Copway

The Traditional History and Characteristic Sketches of the Ojibway Nation

Other titles by Deanna Reder

The Search for James Brady and Absolom Halkett

Honouring the Strength of Indian Women