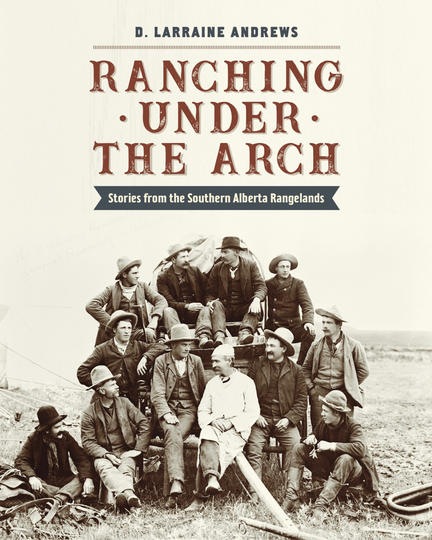 A visually rich, historically epic tale of cattle ranching in southern Alberta, focusing on multi-generational family-owned ranches that are still in existence today.

In the 1880s, a group of fledgling cattle ranchers descended on the plains of southern Alberta. They were drawn by the promise of the West, where the grass seemed endless and they could ranch under the arch of the Chinook-the warm Pacific wind that swooped down the eastern slopes of the Rockies to melt the snow and clear the land for year-round grazing. They came with wild optimism, but their ambition was soon tempered by the brutal reality of a frontier land.

Ranching under the Arch is a tale of survival, perseverance, and prosperity in the face of struggle, loss, and loneliness. Following over a dozen ranches still in operation that have roots dating to the late nineteenth century, historian D. Larraine Andrews recounts the culture that developed around this unique vocation. These ranches have endured as vibrant enterprises, sometimes into the fifth generation of the same family, sometimes with new faces and dreams to change the focus of the narrative. Drawing from historical archives, diaries, and personal accounts, and illustrated by informative maps, fascinating archival imagery, and stunning contemporary photography, Ranching under the Arch is an epic portrait of the "Cattle Kingdom" and its place in Alberta history.

D. Larraine Andrews makes her home a short distance from the Rocky Mountains and arguably some of the best hiking in the world. An avid walker, she has travelled six continents in search of destinations to rival the Canadian Rockies. (The search continues.) Great Walks of the World documents some of these journeys. Larraine's first book, The Cowboy Trail: A Guide to Alberta's Historic Cowboy Country, reflects her lifelong addiction to the history of the Wild West. She has written extensively for international and national magazines and newspapers and was a contributing author to the 2008 edition of Defining Moments in History. In 2001 she won the Dateline Hong Kong Fellowship, a national competition sponsored by the Canadian Association of Journalists and the Hong Kong Economic and Trade Office. Larraine currently devotes much of her time to following the lure of the undiscovered trail. She lives in High River, Alberta.

"This is probably the most comprehensive history of foothills ranching since L.V. Kelly's book The Range Men was first published in 1913. Yet it is superior to this early volume in that it covers a greater time period, right up to modern day ranching." - Alberta History

"If you are at all connected to ranching in the Canadian West. . . this book will suit the most exacting of historians and is a recommended read." - Canadian Cowboy Country

"In a remarkable story . . . that helps to explain southern Alberta’s uniqueness, Andrews makes it clear that the land and the people cannot be separated." - Canada's History

Other titles by D. Larraine Andrews

Great Walks of the World