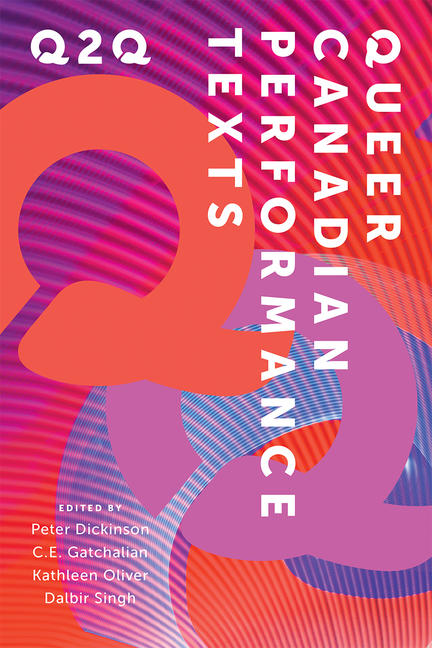 A companion anthology to Q2Q: Queer Canadian Theatre and Performance, the work contained in this volume provides a snapshot of Canadian contemporary queer performance practices—from solo performance to political allegory to family melodrama to intersectional narratives that combine text, movement, and music.

Peter Dickinson is a professor at Simon Fraser University, where he holds a joint appointment in the School for the Contemporary Arts and the Department of English. He is also Director of SFU’s Institute for Performance Studies and Associate Member of the Department of Gender, Sexuality and Women’s Studies. Peter has published extensively on queer Canadian theatre and performance and his produced plays include The Objecthood of Chairs and Long Division.

Kathleen Oliver’s first play, Swollen Tongues, won the 1997 National Playwriting Competition and has been produced across Canada, in London, and (in a French translation) in Paris. Her other plays include Carol’s Christmas and The Family Way, which were both produced in Vancouver. Kathleen teaches English at Langara College in Vancouver and is a regular contributor to The Georgia Straight, where she has been writing about theatre for nearly twenty years. She lives in Vancouver with her partner and son.

Dalbir Singh is a Ph.D. candidate in Performance Studies at the University of Toronto. He taught courses there as well as at the University of Waterloo and the University of Guelph. At Waterloo, he taught the first theatre course exclusively focused on racial identity and Canadian theatre. He has edited five collections of plays and critical essays on topics including Tamil culture and identity, post-?colonial theatre, South Asian Canadian drama, and queer Canadian theatre. As a result, he has published the work of such notable writers as Donna-?Michelle St. Bernard, Ravi Jain, Guillermo Verdecchia, Anusree Roy, and Yvette Nolan.

Other titles by Peter Dickinson

Essays on performance, place and politics

Other titles by C.E. Gatchalian

Art, Beauty, and the Making of a Brown Queer Man

Other titles by Kathleen Oliver

Other titles by Dalbir Singh

Being Human, Being Tamil