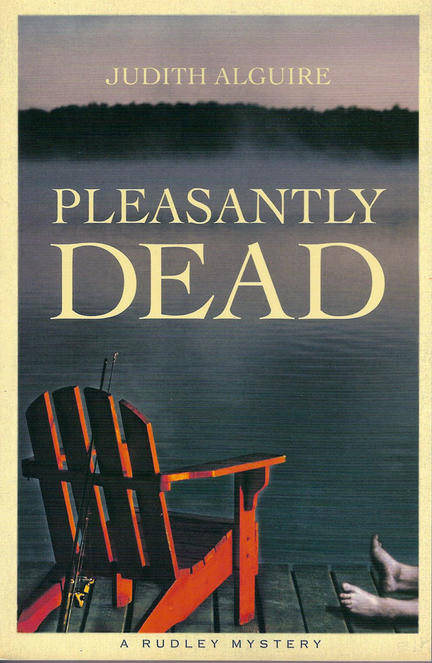 Trevor and Margaret Rudley have had their share of misfortunes at The Pleasant Inn, the cherished Ontario cottage-country hotel they've owned for twenty-five years. There have been boating accidents, accidental poisonings, and then there was that unfortunate ski-lift incident. But this year their hopes are high for the summer season. However, barely a week goes by before their hopes are dashed. There's a dead body making a nuisance of itself in the wine cellar, and it's nobody the Rudleys know. The Pleasant Inn guests, a wealthy and eccentric lot, are dying for distraction, and one of them, Miss Miller, sets out to solve the case of the deceased, relying on wild speculation, huge leaps of logic, and the assistance of her great admirer, Edward Simpson, who is too smitten to dissuade her from her adventure in detection. Challenging her in the race to resolution is the disciplined Detective Brisbois, whose deep-rooted insecurities about his style and status are aroused by the hotel guests' careless assumption of privilege. When Brisbois stumbles into peril of his own, the intrepid Miss Miller is the only one left who can solve the crime.

"There seems to be wine spilled on the floor in the wine cellar."

"Well, clean it up!" Rudley bit his lip so hard his eyes crossed. He regretted quitting smoking. Smoking made dealing with this group of ninnies much easier. Worse, he knew he was probably responsible for the unlocked door and the spilled wine. He had pulled a bottle halfway out, got distracted, and ran out, forgetting to latch the door.

"You told me never to go into the wine cellar."

"I'm saying you can," he said through clenched teeth.

After Tiffany hurried away, he reached under the counter and took out a battered package of Benson & Hedges. He turned his back to the sign that said No Smoking, Maximum Penalty $2,000, and lit up. He was standing there, trailing smoke through his nostrils when Tiffany reappeared. She stared at him, her chin quivering.

"Now," he said, "I suppose you're going to tell me there's a dead body down there."

Nowhere is it more true that a book can be like "a vacation in the pocket," than with Pleasantly Dead by Judith Alguire. "The Pleasant" is the name of an inn in Ontario Cottage Country, the sort of place that would be packed to the rafters, if it existed. Take the food, for example, lush descriptions of all the meals and what those who ate them thought (asparagus crepes, Belgian waffles, French roast coffee and cranberry-orange muffins. The surroundings fit the same vivid description, private cottages all named for trees as well as rooms upstairs in the rambling, well-kept building, where the dipsomaniac, hypochondriac Aunt Pearl stays. Yes, with The Pleasant, its inhabitants are the particular joy. Oh yes, murder does occur, but gently, pleasantly, if you will. While there is a distinct resemblance to Christie on one of her better forays; a romance, admirable eccentrics, no lack of suspects, the flavor is uniquely Alguire's own. Innkeeper Rudley and his wife, Margaret, are as oddly assorted a pair as Faulty Towers ever saw. And when Margaret goes missing, the inn is turned upside down. Alguire has a light, insightful touch with all the little details. The cover indicates this, a red Adirondack chair struck by rays of a setting or rising sun, overlooking a grey lake and a dark shoreline. In the far right corner of the cover are a neat pair of dead feet. A fishing pole leans casually against the chair back, as though the owner had been trying to snag a trout till someone did him in (and stole his shoes). Aunt Pearl and the Music Hall are memorable as well as very funny. There is a mesmerizing quality to the prose. Among American authors, Alguire is reminiscent of Phoebe Atwood Taylor's Cape Cod series, an author she has never read, according to a recent interview. Among Canadian authors she has no equal, though the novel reads more British than U.S. If you want a book to lift you right out of everyday life and set you down in a fascinating world of suspicious guests, great food and lively events, now that Christie's dead, you can't go wrong with Rudley and company. I look forward to many more installments from the inn.

A Most Unpleasant Wedding